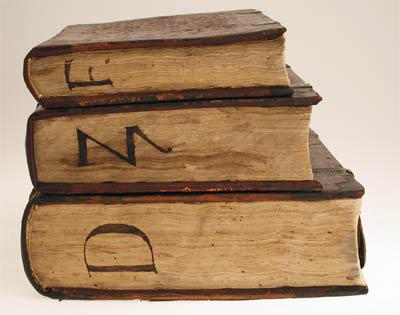 The Nicolaus Pol Collection of Medical Incunabula came to the Dittrick by a curious twist of fate. The collection, originally consisting of 33 volumes from Pol’s library, was offered for sale by Maggs Brothers, London’s premier dealer in rare books. In 1929 Maggs issued a Catalogue of Medical Works from the Library of Dr. Nicholas Pol and asked 2,500 pounds sterling for the collection. At this juncture, the nephew of the distinguished neurosurgeon and bibliophile Harvey Cushing seized the opportunity to purchase the collection, as recounted by Max Fisch:

Through a clerical error, Dr. Harvey Cushing did not receive a copy of the catalogue, but his nephew Dr. Edward H. Cushing of Cleveland did. He promptly persuaded President Vinson of Western Reserve University to cable for the collection and hold it until the Cleveland Medical Library Association could raise the money. This was soon supplied by a donor who asked to be nameless, and the collection came to rest in the Cleveland Medical Library as a memorial to Mr. Charles H. Bingham.

At the time of the sale, Nicolaus Pol’s identity was obscure. Research by the Cushings and others revealed that Pol entered the service of Duke Sigsmund at Innsburck, Austria as a physician in 1487. Three years later he became physician to the Duke’s successor, Maximilian, and in 1494 he received a medical degree, as indicated by the inscription “Nicolaus Pol Doctor 1494” on the inside front cover of all his books. Pol remained in Maximilian’s employ through 1517. At that date Pol may have served on a medical commission to Spain, to study the guaiac treatment of syphilis. Thereafter, in 1519, Pol passed into the service of Charles V and continued so until his death in 1532 at the age of perhaps sixty-five. During his lifetime, Pol became known as a book collector and scholar, whom others often consulted. Max Fisch estimated that Pol’s personal library numbered 1350 volumes, an incredible number for the time. Surviving volumes from the library are to be found in the National Library of Medicine and at Yale in this country, and in Europe at San Candido (Innichen), Innsbruck, and Vienna in Austria. By subject matter, they cover the natural sciences, astrology, horoscopy, physiognomy, chiromancy, alchemy, and other subjects regarded as medical by a “Renaissance man.” The collection has been scrutinized from a bibliographic standpoint by Max Fisch and Dorothy M. Schullian in Nicolaus Pol Doctor 1494 (Published for the Cleveland Medical Library Association in 1947 by Herbert Reichner, New York.). A fuller historical analysis, critically examining Pol’s marginal notes and other aspects of the volumes, and placing them within the context of Renaissance medicine, remains to be undertaken.

For a history and catalogue of this collection see Max H. Fisch, Nicolaus Pol Doctor 1494. With a critical text of his guaiac tract, edited with a translation by Dorothy M. Schullian. Published for the Cleveland Medical Library Association by Herbert Reichner, New York, 1947.