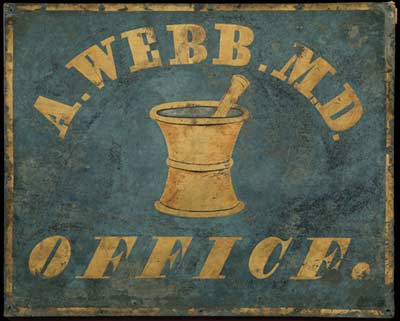 Abner Webb graduated from Cleveland Medical College in 1846 and then started a medical practice by “hanging out a shingle,” the office sign seen here (the first “webb” MD!). Almost a century later, descendants donated his carefully preserved letters, lecture notes, medical texts, and instruments to the Dittrick Museum. Curator Howard Dittrick was thrilled. He used this material to fashion a picture of early student days at Cleveland Medical College (later Case Western Reserve University School of Medicine). Dittrick wrote about Webb’s move to Cleveland, finding lodgings, and enrolling at the fledgling medical college.

In greater detail, he described lectures by school founders Kirtland, Ackley, Cassels, and Delamater, as presented in Webb’s meticulous class notes. In all, the documents and artifacts provide a small window in time revealing the character of medicine and medical education in mid nineteenth century Ohio. Dittrick waxed nostalgic about Webb’s subsequent medical career, portraying him as a typical “medical pioneer” of Trumbull County. Fifty years later, history graduate student Molly W. Berger looked at this and other material, and arrived at a different assessment. Instead, she concluded, “the constitution of local demographics, low and uncollected wages [patients’ fees], a successful farm as financial backup, and the sorry state of the medial profession conspired against the establishment of a successful medical practice.”

Tax records, non-payment of medical licensing fees, and other evidence revealed that Abner Webb, despite his training at Cleveland Medical College, failed in his bid to become a doctor and returned to farming. Ironically, the artifacts donated by the Webb family may have survived intact because Abner put them away when he abandoned the pursuit of a medical career.