The 2020 Emerging Scholars Class participating on a Zoom call 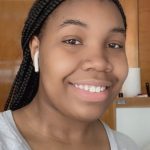 At CWRU, JaiLa is a member of the Black Student Union and enjoys volunteering at various local schools as a tutor and teacher’s assistant. After graduation, she hopes to pursue a career in speech language pathology.

In her own words: “ESP is an amazing program. I feel that ESP really prepares students to be successful in college and life.” 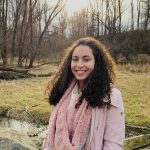 Oumnia Baqacem grew up in Garfield Heights, OH and attended Garfield Heights High School. While in high school, Oumnia was involved in numerous art-related activities. She entered and won various competitions which showcased her talents utilizing a variety of different mediums of art. In addition, she played softball and was a member of the National Honor Society and active in Spanish club. She was valedictorian of her graduating class. Outside of school, she is active in the Moroccan Association of Cleveland.

At Case Western Reserve, Oumnia is currently interested in pursuing a major in cognitive science and would like to possibly pursue a career in mental health after graduation.

In her own words: “The confidence boost that ESP offers is, in my opinion, one of the most valuable takeaways from the program. The longer I have been on campus, the more I realize just how considerable the difference is between my high school experience and what I’m now dealing with. And I feel ESP has helped lessen that blow substantially.” 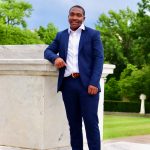 In his own words: “During these trying times, ESP truly helped me find a community long before I arrived on campus.” 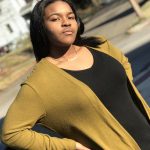 Danyel Crosby grew up in Euclid, OH and attended Cleveland Early College High School on the John Hay Campus. As a result of her academic success in high school, Danyel was valedictorian of her graduating class. She was also a recipient of the Yale Book Award, which is presented to high school juniors from around the country who demonstrate outstanding personal character and intellectual promise. Outside of the classroom, Danyel was a member of the varsity basketball and tennis teams, mock trial team and was Vice-President of the student council.

She intends to major in biology on a pre-med track at Case Western Reserve and hopes to continue her academic career in the joint MD/PhD program at Case Medical School.

In her own words: “Thank you for the experience! ESP really prepared me for my first semester at CWRU and it provided me with study skills and exposed me to available resources at the university.” 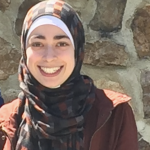 Nour Ewais is a native of Cleveland, Ohio, and attended the Cleveland School of Science and Medicine, where she graduated in the top ten of her class. Over her high school career, Nour received many academic achievement awards, including Excellence in Mathematics, Excellence in Psychology, and a Student Leadership award. In addition, she graduated Summa Cum Laude and was a member of the National Honor Society. Finally, she was recognized by the Cuyahoga County Executive for her outstanding achievements and commitment to educational excellence and community service. This award is presented to top high school seniors in the area. Outside of the classroom, Nour was active in her high school book club and student council.

At Case Western Reserve, Nour is pursuing a major in nursing and hopes to go on to obtain a master’s degree in nursing. Her professional goal is to one day open her own nursing practice.

In her own words: “I want to take a moment and give a heartfelt thank you to all ESP donors who, with their generosity, were able to provide me with the opportunity to engage in a program so enriching and valuable in preparation for my college journey. It was the perfect transition from high school to college and gave me so much confidence going into Case Western Reserve University. Thank you for all the support you provided me in and out of the classroom and for simply making CWRU feel like home.” 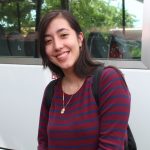 Stefani Garcia grew up in Cleveland, OH and graduated as class valedictorian from Lincoln West School of Global Studies. Her extracurricular activities in high school included being a member of Girls Who Code as well as participating in multiple art events such as Ingenuity Fest and Rooms to Let: CLE. In these events she worked together with her classmates to create an interactive art installation for the public enjoyment.

At CWRU, Stefani intends on pursuing a major in computer science with a minor in art studio. 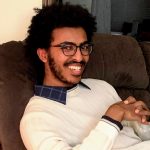 Noah Habtemariam is a first-year student currently pursuing a major in chemical engineering. A native of Reynoldsburg, Ohio, Noah is a graduate of Reynoldsburg High School eSTEM Academy where he was an AP Scholar, Distinguished Scholar and member of the National Honor Society. During this time, he also participated in an internship program with the Ohio Department of Agriculture. Through this opportunity, he was introduced to professional lab settings and gained an understanding of diagnostic lab work. He became familiar with his work in the Virology department, running his own quality-control tests during this internship. Outside of the classroom, he was involved in his school’s robotics team and the Leo Club.

At Case Western Reserve, Noah is a member of AfroAM, a campus organization designed to support the African-American community at CWRU. He hopes to pursue a career in the chemical engineering field.

In his own words: “ESP provided me with a solid foundation, preparing me for my time at Case Western Reserve. The connections I developed with peers and mentors have helped me become familiar with my new community.” 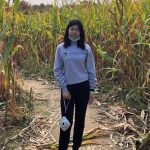 Yongshan Mei grew up in Cleveland, OH and is a first-year student pursuing a major in nursing. She attended the Cleveland School of Science and Medicine, which is a short distance from CWRU. Her academic achievements during her high school career included being named a College Now Top Scholar as well as being named Summa Cum Laude. In addition, she was a member of her school’s honor roll and received recognition for excellence in Math and perfect attendance. Her extracurricular activities included National Honor Society, Health Professional Affinity Community, Health Professionals Pipeline program, Viking CHAMPS, University Hospitals Summer Youth Volunteer program and Math Corps Super Saturday program.

At Case Western Reserve she is a member of the Civic Engagement Scholars Program. She hopes to pursue a career as a registered nurse after graduation.

In her own words: “Thank you for sponsoring ESP and allowing students to establish a foundation for academic success at Case Western Reserve University. ESP allowed me to form connections with the CWRU community, which eased the transition from high school to college.” 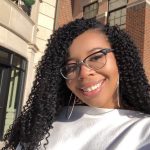 Amber See came to CWRU from Lyndhurst, OH, where she attended Brush High School. During her high school career, Amber achieved significant success both in and outside the classroom. She was awarded a place on the Junior Wall of Fame, which honors Brush students who have distinguished themselves in such ways as overcoming significant adversity, engaging in volunteer work, being held in high esteem by their peers, and achieving academic excellence. She had the fifth-highest GPA in her graduating class. Outside of the classroom, she was a member of the National Honor Society, Student Congress, Science Olympiad, Environmental Club, Yearbook, Orchestra, and French Club. Since beginning her career at Case Western Reserve, Amber has become involved in the Black Student Union, the National Student Speech-Language Hearing Association (NSSHLA), Speech and Auditory Research (SpAR) Lab, and Career Year.

In her own words: “ESP is an amazing program that has helped make my transition from high school to college much smoother. ESP allowed me to adjust to the rigor of classes at CWRU
before the fall semester began. The program also informed me about all of the resources available on campus that I might have been unaware of otherwise. Because of ESP, I have
stronger time management and organizational skills, which will contribute to my success in college and beyond. The program is run by wonderful individuals who have the student’s best
interests in mind and provide lots of tools and guidance to help us succeed. Finally, ESP helped me build friendships with my fellow CWRU students. Having these connections prior to the fall
semester helped me feel like a part of the social community at CWRU. This is especially important now, since it is harder to make friendships with social distancing and Zoom classes.” 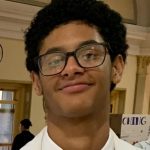 Brahaan Singh grew up in Cleveland, Ohio. Like many of his 2020 ESP classmates, he attended the Cleveland School of Science and Medicine. During high school, he achieved honor roll all four years and received his school’s Striving for Excellence award. In addition to his academic achievements, Brahaan had the opportunity to work in a neurology lab, where he participated in a study that sought to find rehabilitative ways for patients to recover from strokes through deep brain stimulation. He contributed to the study by confirming a valid control group. Outside of the classroom, Brahaan was captain of the varsity soccer team, a member of National Honor Society, and a teacher’s assistant.

At Case Western Reserve, Brahaan is active in Shadowing Case by Case and soccer club. He is currently undecided on a major; however, he is leaning toward biology with a pre-med track.

In his own words: “ESP has such an amazing support system. Dr. Haynesworth and Arthur gave me motivation, inspiration and encouragement not only in school but through these difficult times.” 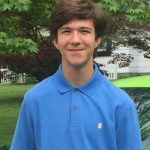 Nicholas Taranto is a first-year student from Alliance, OH and is pursuing a major in mechanical and aerospace engineering. He attended Marlington High School, where he was on the honor roll and graduated in the top ten of his class. His extracurricular activities included participating on his school’s robotics team and track and field.

After graduation, Nicholas hopes to pursue a career as an engineer in the space or motor vehicle industry.

In his own words: “ESP is a great program that made my transition to Case a much more enjoyable experience. My connections still help me both socially and academically. I would love to see the program help more students in the future!” 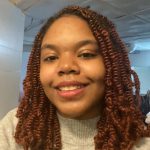 Serena Wheeler grew up in Cleveland, Ohio, is a graduate of Cleveland Early College High School at John Hay. She also attended Cleveland State University prior to her matriculation at Case Western Reserve. In high school, Serena was the recipient of an Academic Excellence award and maintained her place on the high honor roll throughout her four years. In addition, she was a member of the National Honor Society, Multicultural Club, Environmental Club, and the anti-bullying club Not On Our Watch (N.O.W.).

At CWRU, Serena intends to major in computer science and hopes to pursue a career as a software engineer or programmer after graduation.

In her own words: ESP has been an extremely helpful program during my college career, especially with the ongoing pandemic. I greatly appreciate everyone who is a part of it, and it has become another family to me.