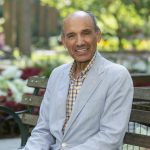 As a paper boy in the mid-1950s, Bryant S. Mason (ADL ’70) had a route in a neighborhood bordering Western Reserve University. He remembers riding his bicycle along elm-lined streets—Wade Park Avenue, Juniper Road, Hazel Drive, Magnolia Drive—in the late afternoons, delivering The Cleveland Press. Sometimes, after he had maneuvered up a long driveway with a stack of papers balanced in his front basket, he would field questions from a customer. What grade are you in at school? What do you want to be? Do you read the newspaper?

Something else from those years also stands out in Bryant’s memory. “I would see the determined students bent on getting their education and feel the bubbling excitement of campus life,” he recalls. “Secretly, I began hoping that one day, maybe, I might enroll at the university.”

Bryant’s wish was fulfilled when he was accepted to Adelbert College in 1962. He planned to study architecture, but some bruising encounters with the physics curriculum led him to reconsider. In 1965, he left school and went to India as a Peace Corps volunteer. While working on a groundwater irrigation project in Haryana State, north of Delhi, he wrote stories for The Hindustan Times. On a visit to the city of Kolkata, Bryant met his late wife, Nondita, a Bengali English professor; they married before he returned to Cleveland in 1969. By then, he had decided to major in English and become a journalist.

Bryant would go on to write for CWRU’s The Observer, The Call and Post (Ohio’s African American newspaper), The Plain Dealer, Time Magazine, The New York Daily News and IBM’s communications department. Thanks to his wife, who taught at Hunter College for 30 years, he kept up with the changing interests of college students and eventually worked in higher education himself. He retired from Bronx Community College’s publicity department in 2010.

Bryant S. Mason (ADL ‘70) spent most of his journalistic career in New York City, where he still lives. His endowment gift to CWRU will benefit undergraduates who grew up, as he did, in the Cleveland area. Photo by Bradley Lau.