The Beamer-Schneider Professorship was created to develop undergraduate character and judgment. Elmer G. Beamer was the accountant for Kent Hale Smith, and Hubert H. Schneider was Smith’s lawyer. At a time when there was a lot of corruption in Cleveland, both men were known for their integrity.  The professorship focuses on ethics (the pursuit of flourishing), morality (upholding what we owe to each other), and civics (being an engaged and responsible member of society, including being socially just).

Here is its proposal for Case Western Reserve University’s future, looking back over 9-years of the Professorship’s programs in late 2018.

At the end of the 2020-21 AY, Jeremy Bendik-Keymer will be stepping down from the Professorship to devote more time to his family, writing, & teaching.  He extends a hearty thanks to everyone who participated in & supported the Professorship over the past eleven years.  Stay tuned for the next chapter in the Professorship!  We are all in this work together.

Please use the drop down menu under “Ethics –> Beamer-Schneider Program in Morals, Ethics, & Civics” to see past work by the professorship, funded through generous support by the Kent Smith Foundation. 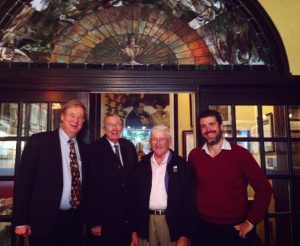 Case Western Reserve University resides on the ancestral lands of the Lenape (Delaware), the Haudenosaunee Confederacy, Shawnee, Wyandot Miami, Ottawa, Potawatomi, and other Great Lakes tribes (Chippewa, Kickapoo, Wea, Pinakashaw, and Kaskaskia). This land of the “Northwest Territory” was ceded under force from the U.S. military by 1100 chiefs and warriors signing the 1795 Treaty of Greenville. Subsequently, the treaty wasn’t honored by the United States of America. Basic rule of decolonization: Honor treaties and figure out how to return jurisdiction on sacred land. It’s the only fair thing to do.