We have to meet people as they are, loose, in a time outside of work.

History of the lecture series 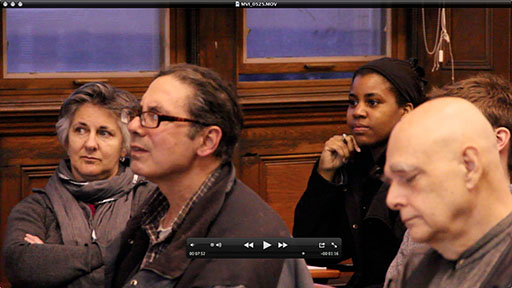 As part of its commitment to develop the ethos of Case Western Reserve University and its relationship to its larger community, from 2010-2018, the Beamer-Schneider Professorship organized several public events by public intellectuals, ethicists, or thinkers of politics on matters concerning the intersection of ethics and civics. The idea was to advance our thinking in these domains and to invite us to deal with a difficult area of our lives philosophically. During the time of the lecture series, there was at least one lecture biennially, with occasional lectures in addition. 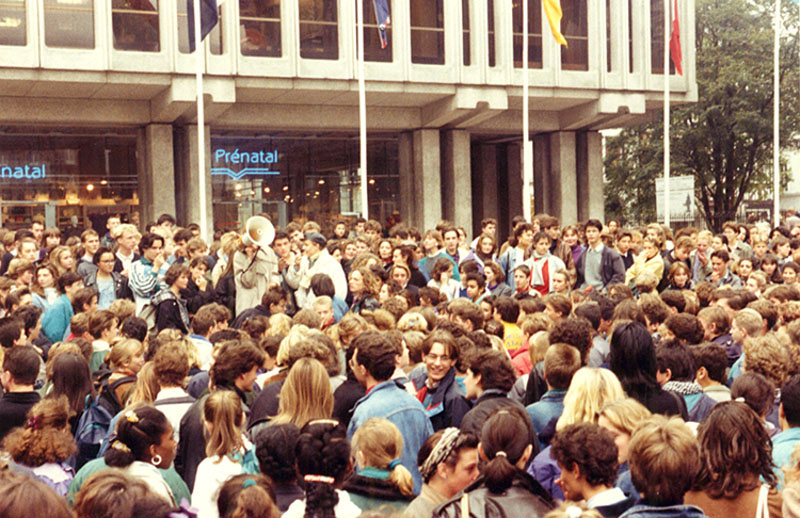 The inaugural lecture was given in April of 2011 by Simon Critchley of the New School University in New York City. His lecture was called “The Powerless Power of the Call of Conscience” and ranged between anarchic politics, social conscience, and the capacity of schools to problematize authority. His workshop, given the day before, was on Apollinaire’s great poem “Zone” and examined the intersection of the personal and the political in Apollinaire’s apparent autobiography of a despondent city-dweller of Paris in the first decades of the 20th century. Professor Critchley also worked with the SAGES class vocation & Life which had read his 2006 book Infinitely Demanding.

In 2012, an occasional Beamer-Schneider Lecture was given by Alex Shakar who spoke about irony that defeats nihilism and his novel Luminarium. He also met with the seminars, The Literary Mind: A Challenge to Philosophy and Poetry as Philosophy with Professor Sarah Gridley. 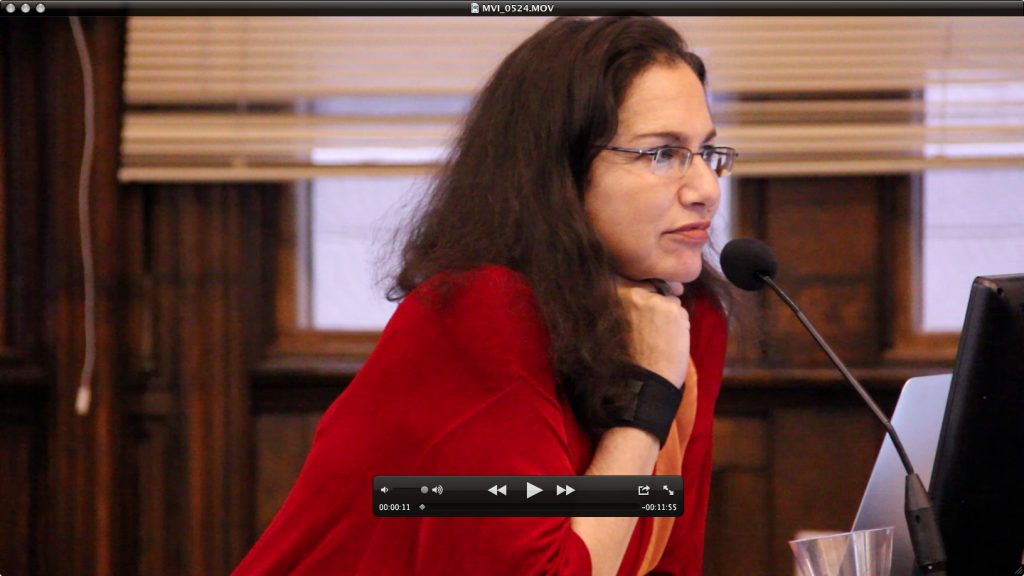 Susan Neiman says that we should learn from the Germans when working through American history, 2013

Susan Neiman, director of the Einstein Forum in Berlin, gave the second biennial Beamer-Schneider Lecture in Ethics, Morals and Civics in April, 2013. Her lecture, “Learning from the Germans: Tarantino, Spielberg, and American Crimes,” examined how 60 years of German attempts to deal with its Nazi past produced a template for confronting national evils. In American culture, such confrontations are rare. Neiman reflected on how Americans can begin to think about forging an identity in the face of our own torturous past. Her workshop the following day was on her novel, Time Heals, tracing the lives of nine people – including writers and barkeepers, bureaucrats and punks, Germans and Jews – as they were affected by the consequences of World War II in postwar Berlin. Neiman also participated in an upper level ethics seminar on Kant and the banality of evil which had read her Evil in Modern Thought.  In 2019, Neiman recognized this lecture as the start of her work, Learning From the Germans: Race and the Memory of Evil.

In late 2013, Lynne Huffer gave another occasional Beamer-Schneider Lecture on her book Are the Lips a Grave? –simultaneously a lecture in queer theory and in feminist theory joined by an autobiographical story. She met with the LGBT Center and consulted with the Flora Stone Mather Center for Women.

In the Fall of 2014, Steven Vogel gave an occasional Beamer-Schneider Lecture on his book Thinking like a Mall: Environmental Philosophy after the End of Nature. He argued that there is no such thing as nature apart from humans and that, paradoxically, everything is wild, even the things we make. 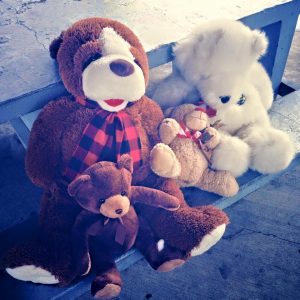 The pavilion at Cuddell Commons, April 2015

The third biennial lecture took place in April 2015 with the artist Michael Rakowitz.  Trying to open up academic form, the Professorship asked whether the lecture could open out and become a socially engaged art project. Rakowitz responded by listening into reports of the Ethics Table’s 2014-2015 discussions of police brutality. At one meeting, a relative of the family of Tamir Rice broke down in grief. Rakowitz heard of this, said he was moved, and responded with A Color Removed. The Professorship introduced Rakowitz to SPACES, Zygote Press, Guide to Kulchur, and the Social Justice Institute.  In 2017-18, following years of further organization by the Professorship, the Professorship entrusted the project to SPACES where it took place during the Cleveland Triennial and supported the Tamir Rice Foundation.  Discussion of the project’s complexities can be found here. 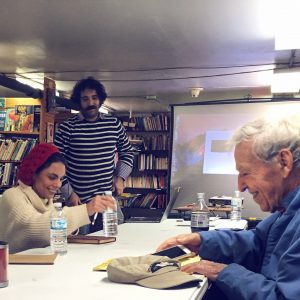 In early Fall 2017, Evan Riley visited to give an occasional lecture on the concept of skill.  He argued that skills are not dispositions but depend on our will, such that a person can be skilled and yet not be disposed to exercise or improve it.  In this way, the larger question of what we want out of life comes into view from behind a picture by which we automatically use the skills we happen to have, which is the dominant view in the literature now. 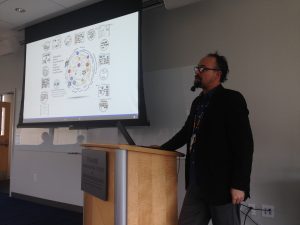 Kyle Powys Whyte talks about seasonal forms of sovereignty and the idea of changing political regimes to adapt to one’s land, the Inamori Center, 2017

The fourth biennial lecture took place in October 2017 with a series of events organized with Kyle Powys Whyte and friends. Whyte holds the Timnick Chair in the Humanities at Michigan State University and is a member of the Citizen Potawatomi Nation.  He gave an indigenous conservation science breakfast with scientists, a talk on indigenous futures and decolonization through indigenous models of transformation, and led a community based charrette to raise the question of what it would mean to decolonize Cleveland.  This event was co-sponsored by the Social Justice Institute. It gave rise to a network called Native Cleveland whose events stretched into 2018, including a film and panel discussion on urban relocation experience among indigenous people in Cleveland.

Going around and hearing who everyone is and where we come from – relationship comes first.

In March 2018, Jonathan Maskit visited to give two occasional lectures -the first on the aesthetics of sustainability in cities, focusing the concepts of what a city affords and entices us to do, and the second on “vehicularism” and the morality of cycling for his forthcoming book, Bicycle in Bloomsbury’s “Object Lessons” series.  One commenter described his visit as a resurgence of the Protagorean tradition that brought philosophy into the city.

In Fall 2020, after a sabbatical year for the professorship in 2019-2020, the lecture series was put on hold in advance of future planning of the professorship’s mission in the current environment.

How can we support restorative justice across history in a land of un-worked-through colonialism, with its legacies of violence and expropriation?

Disagreement is actually the way to autonomy, the focusing moment in which people become more free.