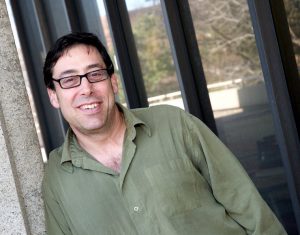 During 20 years at Case Western Reserve University, he’s tackled some of the most important questions in cosmology, particle physics and astronomy.

As he’s worked in his chosen fields, Starkman has also challenged and helped set the course for the undergraduate education and experience at Case Western Reserve, and has fostered cross-campus collaboration.

For his contributions, Starkman has been named a Distinguished University Professor.  He, Mary Barkley, professor of chemistry; David Cooperrider, professor of organizational behavior; and Krzysztof Palczewski, professor of pharmacology; will be recognized during Fall Convocation at 4:30 p.m. today (Aug. 31) at Severance Hall.

Starkman credits the university, Department of Physics and fellow researchers with helping and encouraging him to push boundaries.

“I’ve spent a career working on topics that are not in the mainstream, being my own piper,” Starkman said. “That’s been an interesting and exciting way to have a scientific career.”

The keys, he said, are “incredible post docs and graduate students and not letting other people tell us what the important questions are.”

Among his accomplishments, he’s helped NASA create tools that will one day be used to image and characterize planets beyond our solar system. Having developed the first observational approaches for differentiating models of modified gravity from dark energy, his work is now at the core of dark energy surveys.

Researchers at the world’s largest particle accelerator, the Large Hadron Collider, use the computer code Starkman and colleagues developed that models the production and decay of mini-black holes to know how to search for such events.

He and colleagues have used the cosmic microwave background to characterize the shape of the universe, and discovered anomalies in that cosmic background radiation that challenge the standard theory of cosmology. They have proposed that dark matter, rather than being comprised of tiny exotic particles, may instead be dense clumps of matter that arise from the Standard Model of particle physics.

In all, he’s authored more than 150 journal articles and conference papers. He’s also won a Guggeinheim Fellowship for “exceptional capacity for productive scholarship.”

On campus, Starkman chaired the President’s Commission on Undergraduate Education and Life more than a decade ago. He encouraged members to creatively and boldly think how Case Western Reserve could provide undergraduates with an educational experience that develops the whole person, commission members recall.

As a result, the university increased interactions among students, faculty and staff in everything from admissions to dorm life, including a renewed focus on undergraduate research and experiential learning and creation of the SAGES (Seminar Approach to General Education and Scholarship) program.

Following his role on the commission, Starkman served as associate provost for the Undergraduate Initiative and became a founding board member of the Reinvention Center, a national resource for undergraduate education at research universities.

While he’s held positions focusing on the undergraduate experience, Starkman was presented a John S. Diekhoff Award for Excellence in Graduate Student Mentoring last year—an award based on nominations from graduate students.

“It’s important to be at a university where you are interacting with students at all levels,” he said.

Starkman is director of the Center for Education and Research in Cosmology and Astrophysics, which brings together faculty and students in physics and astronomy interested in cosmology.

He’s founding director of the Institute for the Science of Origins, which fosters collaboration among researchers from diverse disciplines and has brought the university, the Cleveland Museum of Natural History and the public broadcasting nonprofit Ideastream together to engage the community and leading scientists.

Recently, Starkman helped create the interdisciplinary origins sciences major, offered this fall through the collaboration of 10 departments in the College of Arts and Sciences and Case Western Reserve School of Medicine.