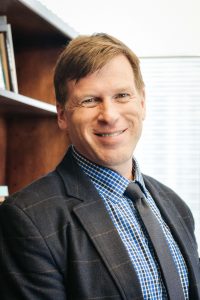 Timothy Beal, PhD, the Florence Harkness Professor of Religion, was named interim dean of the College of Arts and Sciences after longtime leader Cyrus Taylor stepped down December 31.

Tim joined the Case Western Reserve University faculty in 1999 and was chair of the Department of Religious Studies since 2015. He has also served three three-year stints on the college’s Executive Committee, three terms on the Faculty Senate, and eight years chairing the Common Reading Committee. Beal has participated in multiple search and strategic planning committees and served as director of the Baker-Nord Center for the Humanities from 2004 to 2008.

Beal earned his doctorate from Emory University and has published 14 books, most recently Revelation: A Biography, published with support from a Public Scholar Award from the National Endowment for the Humanities. Other books include The Rise and Fall of the Bible: The Unexpected History of an Accidental Book (Houghton Mifflin Harcourt, 2011), Biblical Literacy: The Essential Bible Stories Everyone Needs to Know (HarperOne, 2009), Religion in America: A Very Short Introduction (Oxford University Press, 2008), Roadside Religion: In Search of the Sacred, the Strange, and the Substance of Faith (Beacon, 2005), and Religion and Its Monsters (Routledge, 2001).