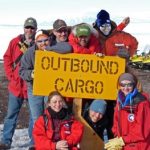 Every year, a small group of adventurers travel to the bottom of the world in search of meteorites. While “space rocks” fall randomly around the world, a small proportion land in the snowy landscape of Antartica – “like the canonical raisins in the pudding,” says Ralph Harvey, professor, Department of Earth, Environmental and Planetary Sciences at Case Western Reserve University. In other words, they’re really easy to spot on a blank white canvas.

Harvey has led the Antarctic search for meteorites, known as ANSMET, for 24 years. The program was recently featured in “Diamonds in the Ice,” a new episode of “On a Mission,” a podcast from NASA’s Jet Propulsion Laboratory.

ANSMET is the “adventure of a lifetime,” says Los Alamos Planetary Scientist Nina Lanza, who recently made the journey and was featured in the podcast. “ANSMET is responsible for bringing back something like 60 percent of all known meteorites in the world. But it’s a really hard mission to get on, and they don’t want to take just anyone,” she says.

In fact, getting a coveted seat on the expedition is akin to finding the Golden Ticket inside a Willy Wonka chocolate bar, according to the podcast narrator. The small group of about eight adventurers get together for “boot camp,” where they learn important safety, environmental and survival training before journeying to Antarctica.

Join Harvey and his team as they search for their space treasure by listening to the podcast. To learn more about ANSMET and its ongoing search for meteorites, visit https://caslabs.case.edu/ansmet/.