So Many Angles to the Story 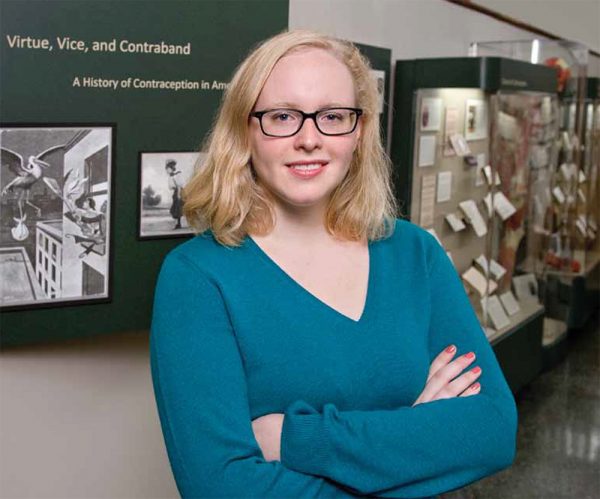 Kathryn Goldberg learned about the Dalkon Shield, a device that harmed thousands of women in the 1970s, while working at the college’s Dittrick Medical History Center. The center is home to the Percy Skuy Collection on the History of Contraception. Photo by Mike Sands.

In 1970, A. H. Robins, a large pharmaceutical company, purchased rights to manufacture and distribute an intrauterine device (IUD) called the Dalkon Shield. It did so despite an internal warning that the device was neither as effective or safe as its inventor claimed.  The following year, the company launched an aggressive campaign to market its new contraceptive.

Ultimately, the Dalkon Shield caused 18 deaths and more than 200,000 illnesses and injuries among the 2.8 million women who used it. After evidence came to light in the mid-1970s that A. H. Robins knew of the risks and failed to act on this knowledge, Senate hearings and one of the largest tort liability cases in U.S. history followed. More than 300,000 lawsuits were filed, and courts awarded almost $3 billion in damages.

The harms caused by the Dalkon Shield—pelvic inflammatory disease, sterility and miscarriage—were physically and emotionally painful. But the women’s ordeal did not end there. The trial, which involved intrusive questions about intimate sexual matters, was humiliating for the women who testified. Most victims received only small awards—$750 to $2,000.

“Many of the injured women were young—the same age as some of my friends are now,” observes Kathryn Goldberg, who is writing a thesis about the Dalkon Shield litigation. “They were hurt at every turn by this very flawed medical device.”

Since she arrived on campus, Goldberg has concentrated on the history of science, medicine and technology. As a first-year student, she took a course on the history of medicine with Jonathan Sadowsky, the Theodore J. Castele Professor. Under his guidance, she also completed an independent study on the history of women’s reproductive health.

“The independent study course Katie did with me took a lot of initiative on her part,” Sadowsky says. “She selected the readings and created the assignments. She really cares about what she studies and takes a strong personal interest.”

During her junior year, Goldberg organized an exhibit at the Dittrick Medical History Center featuring items from the Percy Skuy Collection on the History of Contraception. “I found the display of contraceptive devices fascinating,” she says.  “And I also became very curious about why I’d never heard of the Dalkon Shield and why, for women my age, condoms and the pill are almost the only options, despite the fact that they both have drawbacks.”

Delving into the subject, Goldberg discovered a saga of bad medical engineering, flawed research and unethical advertising.  She also discovered that, although there were many books and articles about the case, there was still room for an in-depth social history of the Dalkon Shield. She decided she wanted to write one, and the college’s Integrated Graduate Studies Program gave her the opportunity to do so.

The program enables highly motivated students in selected departments to pursue their interests on both an undergraduate and a graduate level. “When I entered the program, I already knew what my topic would be, and I realized I could start the research right away,” Goldberg says.

Through one of her extracurricular activities, Goldberg had learned the importance of explaining scientific matters in ways accessible to a broad audience. She is the editor of Engineering and Science Review, a research magazine produced by Case Western Reserve undergraduates. This experience prepared her to write an account of the Dalkon Shield litigation that would be scientifically accurate as well as historically objective.

“Many of the major books about the Dalkon Shield have an understandably emotional tone,” she explains. “I wanted to present the issues as neutrally as possible.”

Goldberg began her thesis research in earnest this past summer. With a grant from the SAGES program, awarded in collaboration with SOURCE (Support of Undergraduate Research and Creative Endeavors), she spent two months in Washington, D.C., tracking down primary documents at the Library of Congress, the National Archives, the Food and Drug Administration and the National Library of Medicine.

She relished the challenges of researching events of the pre-digital era. Since many of the documents related to the case are available only in hard copies, she had to go to the libraries and other collections to view them. “Without the SAGES grant, I never would have been able to visit all those libraries in person,” she says.

Goldberg also spent a month at the University of Virginia Law Library, which houses the papers of the Dalkon Shield Claimants Trust. There she read corporate memos, listened to tapes and watched films of the trial.

Finally, Goldberg interviewed Morton Mintz, the Washington Post reporter who broke the Dalkon Shield story. Her conversation with him shed light on how much reporting has changed during the past 35 years. When Mintz was at the Post, journalists were allowed to work in depth on a single story for as long as necessary. The newspaper published a series of stories about the unfolding Dalkon Shield disaster, which sustained the public’s interest in the issue.

“There are so many angles to this story,” Goldberg says. “How the media handled it is one I might include in my thesis.” 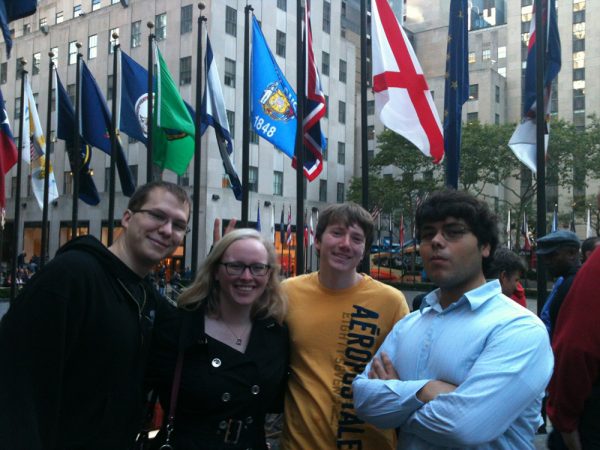 Many writers and analysts have placed the blame for what went wrong with the Dalkon Shield squarely on the shoulders of the inventor and the decision makers at A. H. Robins. “Surely there was individual culpability,” says Goldberg. She found a whistleblower’s description of company executives burning incriminating documents, and she admits to thinking “Gotcha!” when trial transcripts revealed someone lying about health risks posed by the Dalkon Shield.

Nevertheless, she leans toward a broader, more historically informed interpretation of events. “I think the social conditions of the time—lack of regulation for medical devices, the lack of standards for human research trials and a culture in which women were reluctant to question their physicians—created a perfect storm, and a bad device became more popular than it ever should have.”

Noting that the lawyers, judges and even A. H. Robins executives were all deeply affected by the protracted litigation, Goldberg adds,  “I have a lot of empathy for everyone involved in the case.”

Her research has persuaded her that government regulation and high standards for studies involving human subjects are crucial if medical advances are to proceed without endangering public safety. She points out that when the Dalkon Shield was introduced, the Food and Drug Administration did not have jurisdiction over medical devices.

“Corporations can take steps that save lives, or they can cut corners and put people at risk,” Goldberg says. “Corners are likely to get cut if there aren’t laws in place to protect consumers.”

The Dalkon Shield litigation had a chilling effect on contraceptive research in the United States. Today, only two types of IUD are available in the U.S., whereas a variety of such devices are available in Europe and China, where they are very popular. Describing herself as a huge fan of technological innovation, Goldberg says, “If someone were designing an IUD today, I would applaud that, but it should be subject to rigorous testing. I think we can have innovation without sacrificing people.”

Meredith Holmes is a freelance writer.