In diverse ways, alumni contribute to the university's success 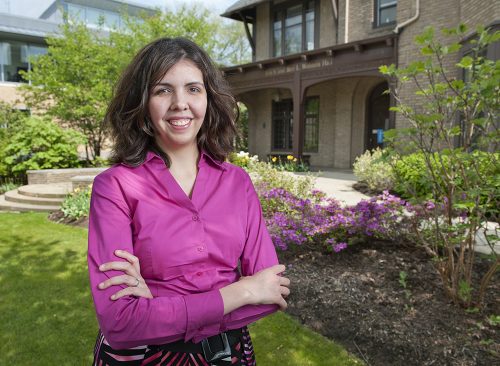 As a volunteer with the Office of Undergraduate Admission, Maya Brown-Zimmerman often interacts with prospective students at its home, the Iris S. and Bert L. Wolstein Hall. Photo credit: Mike Sands

When high school students across the United States meet with a representative from Case Western Reserve, the smiling person across the table may not be an admission counselor, but rather a dedicated alumni volunteer.

Many graduates continue their affiliation with the university long after their time on campus has ended. For Maya Brown-Zimmerman (CWR ’07), this means helping the next generation of students find their way to Case Western Reserve. She first got involved in the recruitment process when she was just an undergraduate herself. During her freshman year, she hosted prospective students for overnight campus visits and talked with families while they waited for tours. By her junior and senior years, she was interviewing students and speaking during panel presentations.

When Brown-Zimmerman wasn’t volunteering, she took full advantage of the academic opportunities at Case Western Reserve. The university, she says, “gave me room to explore what I wanted to do. I switched majors four times—and I still graduated in four years.”

After earning a degree in psychology, she married another alumnus, Mark Zimmerman (CWR ’06, GRS ’08), and completed a master’s degree in public health at Ohio State. Today, she’s a mother of two, a freelance writer for such media outlets as WebMD, and a member of the National Marfan Foundation board of directors.

But amid her busy career and family life, Brown-Zimmerman has stayed close to the institution she calls “the perfect fit.” For several years, through a program organized by the Office of Undergraduate Admission, she and other knowledgeable graduates promoted the university to high school seniors and hosted outreach events in their areas.

This spring, the office relaunched the program with a new name and focus. Brown-Zimmerman and other volunteers are now called Alumni Admission Ambassadors, and their primary role is to interview prospective students. By tapping into the enthusiasm of these alumni, the office hopes to expand its reach and improve the quality of interactions with students who are thinking of attending the university.

“Interest in Case Western Reserve is at an all-time high, with prospective students coming from around the country and around the globe,” says Bob McCullough, director of undergraduate admission. “The Alumni Admission Ambassadors will play a vital role by demonstrating that Case Western Reserve has a presence in their local communities, and by encouraging students to explore the terrific opportunities available to them here.”

Brown-Zimmerman’s admission experiences have been an advantage, but she doesn’t want those who may not know as much about the university to feel they won’t succeed as volunteers.

“You can get your feet wet slowly,” she says. “Talk with the admission counselor who works in your area. You’ll get more and more comfortable.”

Among the rewards of Brown-Zimmerman’s involvement is seeing high school students’ interest perk up as she describes her alma mater.

“I love talking about Case Western Reserve,” she says. “It’s really exciting for me to talk to the next generation about what the university has to offer. I had such a good experience, I’m trying to help people find that fit.”

Alumni can engage with the university in other ways as well. Beginning this fall, the Alumni Association of Case Western Reserve will launch a major effort to expand the Alumni Career Network, which connects current students seeking internships or employment with alumni working in their field. Through a new online social networking component, alumni will register to offer assistance, and students will be able to communicate with them directly throughout their undergraduate years.

“Freshman year, students will have the opportunity to talk to an alumnus about selecting a major,” says Chris Vlahos, associate vice president for alumni relations. “Sophomore year is when the first internships happen. By junior year, they’re beginning to build their network base, and senior year they’re jumping off.”

Vlahos hopes to mobilize thousands of alumni to help today’s students get their start, whether by assisting them in their search for an internship or first job, or simply by acting as mentors and sounding boards.

“The university family includes alumni, who are important to the success of the university. So we need alumni to do some heavy lifting for us,” Vlahos says. “But what do alumni get out of it? They often get a sense of fulfillment—they have an opportunity to play an active role in the university’s success.” 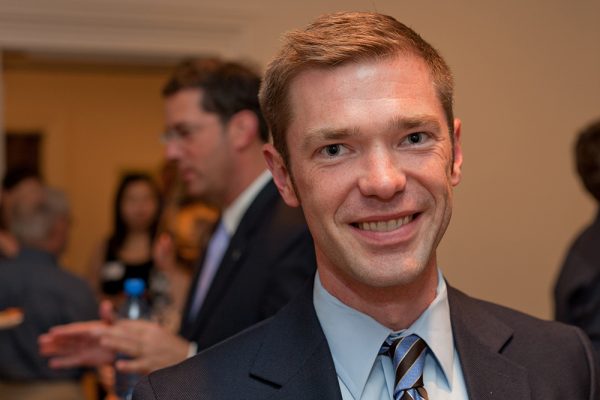 Many graduates remain involved with Case Western Reserve through its 24 alumni chapters—19 in the United States and five around the world. Chris Hook (CWR ‘03, GRS ’04) became part of the Washington, D.C. – Baltimore Chapter when he moved to the region for the Presidential Management Fellows Program, an executive branch initiative to develop future government leaders.

“I had moved to a new place, I didn’t have a lot of friends when I first moved here, and it seemed like a great opportunity to meet people who could make recommendations and serve as mentors,” he says.

Hook had served in leadership positions at the university, both in the Student Turning Point Society and the Residence Hall Association. His first chapter event was probably a “random happy hour,” he says. But eventually he became chapter president and was recruited to the Alumni Association Board of Directors.

“It was a natural progression for me that once I graduated, I wanted to remain affiliated with the university,” says Hook, who is now a budget and policy analyst for the U.S. Department of Justice.

Under Hook’s leadership, the alumni chapter has organized a variety of events, including baseball games, a reception at the National Portrait Gallery for alumni and incoming students, and a career event whose theme, “Networking at the Speed of Light,” was inspired by the Michelson-Morley experiment.

“Alumni have a desire to make connections, whether they want to meet incoming freshmen or see a great presentation by a professor,” Hook says, explaining the appeal of these diverse activities. In his own experience, some of these connections have come as a welcome surprise.

“When you graduate, you don’t think you’re going to become close friends with someone from Flora Stone Mather College,” he says. “I’ve gained a unique perspective from meeting alumni from the different schools and different areas.”