In its farewell season, a student string quartet takes on a daunting challenge

Michael McCarthy (left) and Winston Liu started performing together during their sophomore year. “Quartet is probably where you meet your best friends,” Liu says. Photo by Mike Sands.

Although it is called a dress rehearsal, the four musicians arrive at Harkness Chapel in everyday clothes, like students on their way to class or friends on a casual outing. Everyone shows up on time—9:30 on a chilly April morning. As they arrange their seats in a half-circle and unfold their music stands, sunlight fills the ornamental windows overlooking the stage. For months, the members of the Cyan String Quartet have been practicing in a small basement studio. Now it is time to try out the venue for their final performances.

The players are all undergraduates from the College of Arts and Sciences. But only one—first violinist Michael McCarthy (CWR ’12)—is pursuing a music degree. Winston Liu (CWR ’12), the second violinist, and Michael Chiang, the violist, are both chemistry majors planning on dental school. The cellist, Peter Knutson (CWR ’12), is a psychology major heading for a career in the United States Air Force.

Without exception, though, music has been an integral part of their college experience. They have played for the CWRU/University Circle Symphony Orchestra, conducted by associate professor Kathleen Horvath, in some cases from the start of their undergraduate careers. And through the university’s Joint Music Program with the Cleveland Institute of Music (CIM), they have received quartet coaching from CIM faculty member Annie Fullard, who joins them for this rehearsal.

The students have devoted the entire semester to a single work—Beethoven’s Quartet in C major, opus 59, no. 3. Fullard wants them to run through the entire piece, but she begins by asking them to practice specific passages. Sometimes, she stops them in mid-phrase and sings the melody they have just been playing, suggesting how to convey its emotional character. At other times, she calls out praise, advice or exhortations as they play: “Warm! Warm!” “More cello!” It’s as if the piece has suddenly become a composition for quartet and voice.

Each semester, Fullard coaches three or four undergraduate ensembles from the university. She created the chamber music program eight years ago and has kept it going despite her own demanding performance schedule—she is first violinist of the Cavani String Quartet—and her teaching responsibilities at CIM. Her students are equally dedicated; they often form ensembles during their first year on campus and continue playing until they graduate. 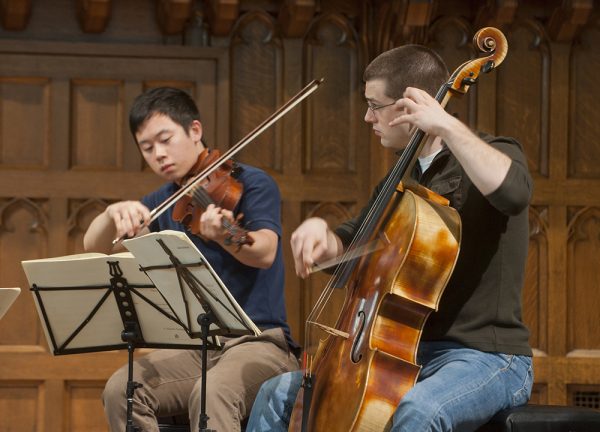 Michael Chiang (left) started out as a violinist but switched to viola while in the preparatory program at the Juilliard School of Music. Peter Knutson began piano lessons at age 5 and cello lessons at age 8, and continued with both instruments until he entered college. Photo by Mike Sands.

“I know how hard they work in all of the diverse aspects of their lives, so I admire them for finding the time to practice and rehearse,” Fullard says. “They approach music with the same seriousness that they apply to everything else.”

Speaking about the members of the Cyan Quartet in particular, she adds, “I admire their commitment of spirit and energy, their thirst for knowledge, their love of music and their respect for each other. I’ve watched them grow over the past three years, and I think they’ve fallen in love with playing chamber music and with the process of working on it. That’s very important to me personally. I’m a little biased, because that’s what I do for a living. But I don’t think you have to make this your career path in order to do it at a very high level.”

McCarthy didn’t start out as a music major; he wanted to major in physics and play the violin on the side. Soon after he arrived on campus, he began private lessons with CIM faculty member Carol Ruzicka—an opportunity made possible through the Joint Music Program. He also entered a concerto competition that Horvath organizes each spring and became one of the only first-year students ever to win. In his sophomore year, McCarthy performed as a soloist with the orchestra and was appointed concertmaster, a position he held until he graduated in May.

Horvath remembers stopping by Haydn Hall on evenings and weekends and hearing McCarthy practicing in the otherwise vacant building. She watched him develop as an orchestral player and leader. When, in his junior year, he switched his major to music, she wasn’t surprised.

But Horvath has equally vivid memories of the other members of the Cyan Quartet. Knutson, who joined the orchestra as a freshman, rose to the position of principal cellist, guiding his section through some especially challenging repertoire. As second violinist, Liu assumed a leadership role as well. There was one semester when he and Chiang couldn’t attend rehearsals because of their lab schedules, but Horvath saved their places and welcomed them back the following term.

Like Fullard, Horvath enjoys teaching students with so many different majors and interests. One year, when she had a great many pre-meds in the orchestra, she chose works by two composers who were also doctors: Felix Mendelssohn and Alexander Borodin. During a rehearsal, she mentioned that Borodin wrote the first treatise about the antiseptic properties of vinegar—a discovery that helped save soldiers’ lives during World War I.

The orchestra rehearses twice a week, all semester long. It’s a lot to ask, Horvath admits, but otherwise they couldn’t carry off works as complex as Mozart’s Requiem, which they performed last year with the concert choir led by assistant professor Matthew Garrett. Still, there are times when Horvath has to make allowances for the academic pressures her students are facing. 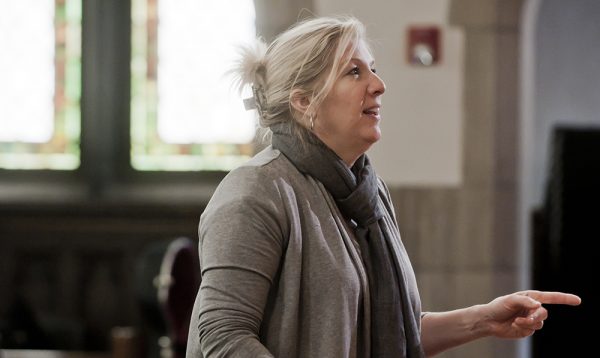 Annie Fullard, a violinist and faculty member at the Cleveland Institute of Music, has coached the students in the Cyan Quartet for the past three years. Photo by Mike Sands.

The Cyan Quartet was one of three student ensembles working with Fullard this spring, and they all performed in a chamber music concert at the end of the term. Decked out in matching tuxedoes, the Cyan members took their places on the Harkness stage and gave a nuanced, confident reading of the Beethoven quartet. “It was a huge undertaking,” Fullard said afterward, thinking back on their months of preparation, “but they climbed the mountain. Their performance was exciting and beautiful and polished.”

The quartet was also on the program for McCarthy’s senior recital, the final requirement for a bachelor’s degree in music. During the weeks leading up to it, McCarthy had been auditioning at some of the nation’s leading conservatories. By now, he knew that he would attend CIM this fall as a student of William Preucil, concertmaster of the Cleveland Orchestra.

His fellow quartet players would soon embark on other careers, but they all felt that music would hold a permanent place in their lives. They spoke of playing in community orchestras, reconnecting with former teachers and someday giving their children the opportunity to learn an instrument or two. Maybe they would even pass along some of the advice Fullard gave them as they were rehearsing the final, exuberant movement of the Beethoven quartet.