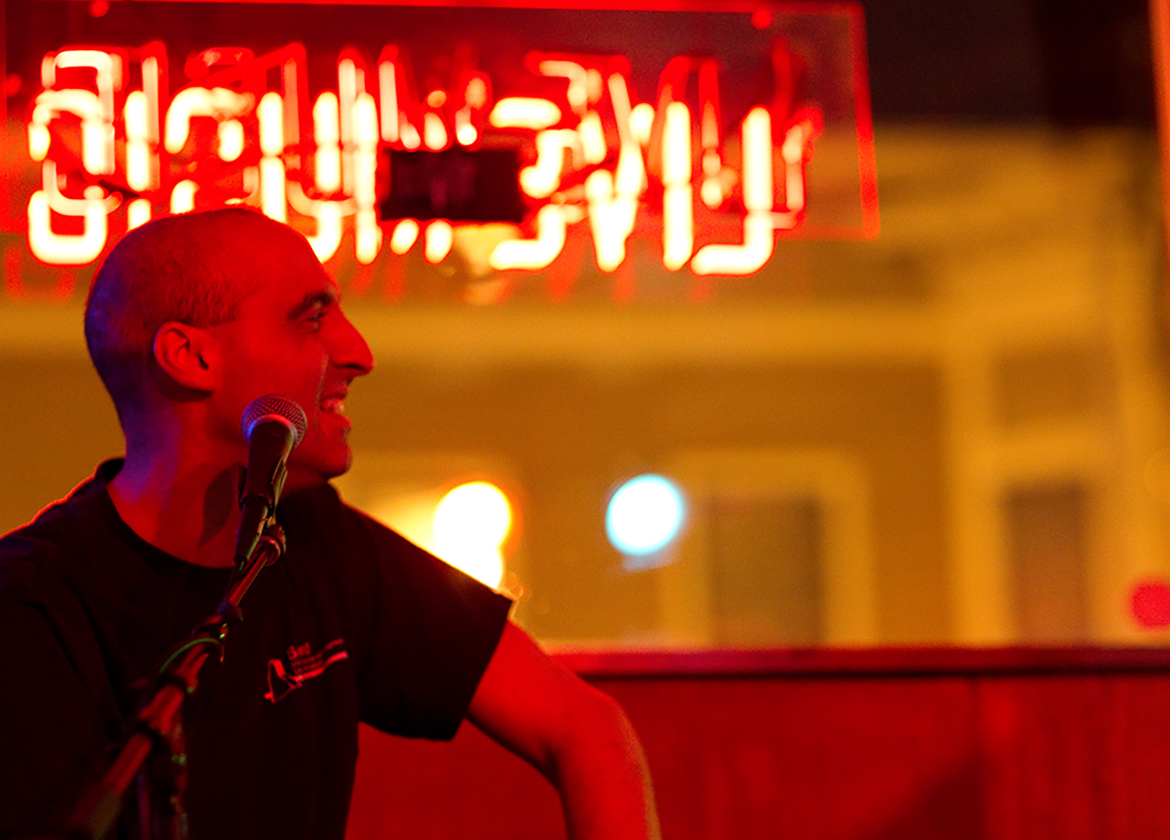 Dan Akerib talked about dark matter from the stage of the Happy Dog on Cleveland’s west side. Photo by Laura Webb.

The Happy Dog, a hipster bar on Cleveland’s west side, is so crowded that many patrons can’t get their hot dogs while others, louder with their cries to attract a server, can’t get their beer. Part of the crowd is so far from the stage that they aren’t aware a performance is about to start. They laugh, talk and whoop, while the people who are closer carry on in a more muted way, glancing up every now and then for signs of action.

Finally, the performers appear, a red neon “Live Music!” sign glowing behind their heads. But this is no indie band taking the stage. Instead, Glenn Starkman, professor of physics and astronomy and director of the Institute for the Science of Origins, introduces Dan Akerib and Tom Shutt, two experimental physicists wearing T-shirts that say “Nerds looking for WIMPs.”

“They’re here to tell us about dark matter and dark beer,” Starkman says.

And for the next hour they explain their work hunting dark matter while clutching red plastic cups of dark beer. They are indeed looking for WIMPs—weakly interacting massive particles that scientists believe originated with the rest of the universe in the Big Bang. Akerib tells the crowd that it’s like looking for a needle in a haystack, then projects an image of a haystack with a needle the size of a javelin sticking in it.

“This is what you hope for,” Akerib says, drawing a big laugh. “But WIMPs are so tiny they’re hard to find. You know those lead aprons you wear at the dentist to protect yourself from X-rays? Those aprons are about 1/16 of an inch thick. You’d need an apron a light-year thick to stop a WIMP.”

As the evening concludes, Akerib and Shutt are mobbed at the stage like rock stars, as patrons of the bar draw closer to pelt them with questions. This is just what the Institute for the Science of Origins intends by these monthly gatherings at the Happy Dog and by other outreach programs: to get the public excited about science.

“There’s a lot of money going into formal STEM education,” Starkman says, referring to science, technology, engineering and math. “And that’s really important. But people going into those fields will only ever be around 10 percent of the society. You want the other 90 percent to be on the side of science, even if they’re not scientists and engineers. You want them to see the value of science.”

Founded in 2008, the Institute for the Science of Origins (ISO) aims to increase scientific understanding of the origin and evolution of complex systems—the universe itself, life in all its variety, and the many components of human culture. It is the result of a collaboration between Case Western Reserve, the Cleveland Museum of Natural History and ideastream, Cleveland’s public television and radio organization.

ISO fellows, who work in fields ranging from cosmology to paleoanthropology, conduct public events like the monthly Happy Dog talks and the Origins Science Scholars Program, a series of dinner-hour presentations and discussions that attracts dozens of subscribers to campus each semester.

“Both venues offer scientific topics that are exciting to the public,” Starkman says. “Many of these topics, such as evolution and especially human evolution, are culturally controversial.”

ISO is also helping University Circle’s Montessori High School develop a new, origins-based science curriculum for grades 9 and 10. This curriculum is expected to serve as a model for Montessori high schools around the world. ISO is taking to the Internet as well, working with the Cleveland Museum of Natural History on an online course and creating its own short, provocative YouTube videos, not so much to teach as to spark an interest in science.

Faculty members associated with the Institute for the Science of Origins seek out opportunities to increase public understanding of science—not only at campus events, but also in such unlikely venues as The Happy Dog bar. From left: physicists Dan Akerib, Glenn Starkman and Tom Shutt. Photo by Laura Webb.

In addition, ISO fellows pursue original research involving new configurations of the sciences. Mark Hans, chair of orthodontics in the School of Dental Medicine, and Bruce Latimer, adjunct professor of anthropology, are involved in a dig at the Manot Cave, the largest prehistoric cave ever found in Israel. One of the most remarkable finds is a 58,000-year-old Neanderthal skull, remarkable because it’s rare to find human remains that old.

ISO has assembled an even more diverse group of scientists for its In Silica Cell project—an effort to create a computer model of a cell that perfectly mimics its workings, all the way down to the influences of its genes. The researchers include Daniela Calvetti, chair of the Department of Mathematics; Stan Gerson, professor of hematological oncology in the School of Medicine; and physicist friends of Starkman who used to work on Wall Street wrangling huge data streams and creating probabilistic models.

“This is an exciting initiative and ahead of its time,” Starkman says. “If we can build a model on the computer that reacts like a cell, we can see how it reacts to its environment or how it changes from normal to cancerous. Ultimately, the model could be used to pretest drugs and see why they do or don’t work. To do that computationally would be of incredible economic value and can accelerate the work done in laboratories.”

The institute is also part of an initiative by faculty members in the College of Arts and Sciences and the School of Medicine to bring a greater focus on evolution to medical research and education. ISO fellows currently offer a few classes in evolutionary medicine for graduate and undergraduate students, but the goal is to create a graduate program in evolutionary medicine.

Such a program would be of great value to future doctors, nurses, public health professionals and others, says Cynthia Beall, an evolutionary anthropologist and Distinguished University Professor in the College of Arts and Sciences.

“Evolutionary processes resulted in a lot of our vulnerabilities to disease, and understanding them can make sense of things that don’t seem to make sense,” Beall says. “For instance, women have more problems with their knees than men do, and their knee replacements fail more often. That’s because women have wide hips to give birth to large-brained babies, and that creates a bigger angle from their knees to the outside of their hips. If you’re a biomedical engineer and you understand this, maybe you can design an artificial hip or knee that would be more effective for women.”

“Having an understanding of evolution is essential in treating infectious disease,” adds ISO fellow Neil Greenspan, an immunologist and professor of pathology in the School of Medicine. “Our immune systems and the pathogens they combat evolve on a day-to-day basis, and medical interventions often elicit responses explicable within an evolutionary framework but otherwise difficult to rationalize.”

By bringing together people from so many different fields, the institute has become a catalyst for creativity. The ISO fellows gather weekly for lunch to discuss their various pursuits, and even these informal interactions have a powerful impact.

“The discourse is very free-ranging, not just focused on getting your next grant,” Greenspan says. “The lunches are all about intellectual conversation and camaraderie. Really, they represent the best of what academic life can be.”

Related Links: Lectures from the Origins Science Scholars Program are available at http://www.case.edu/origins/scholars/videos.html