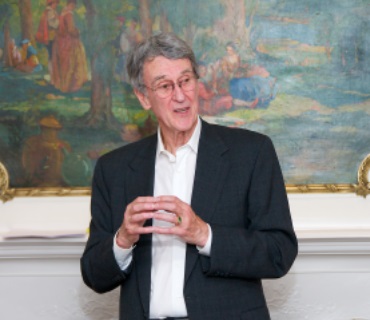 Dixon Long, professor emeritus in the political science department and dean emeritus of Western Reserve College, has provided philanthropic support in areas of research and education that he promoted during his university career. Photo Credit: Daniel Milner

There was a time when Dixon Long would have passed the hours on a plane reading Foreign Affairs or the American Political Science Review. That was how he stayed current in his field. A faculty member at Case Western Reserve for 26 years, Long taught courses on global politics and studied how national governments promoted and responded to technological advances. During the Cold War, he took a special interest in nuclear weapons and arms control, topics that involved both science policy and issues of war and peace.

This May, however, when Long traveled from his California home to spend a few days on campus, he carried no journals aboard his flight. Instead, he brought the proofs of his latest novel. Since retiring in 1993, Long has devoted much of his energy to writing fiction—a craft he pursues with obvious relish. As he read his new book for the last time, he noticed “a hole in the story” and immediately began drafting sentences to fill it. Later, when he wasn’t attending meetings or social events, he cheerfully returned to his task, knowing exactly how he wanted to close the gap in the plot.

Although Long has relinquished his scholarly routines, his commitment to Case Western Reserve remains exceptionally strong. During his visit, he met with political scientist Kathryn Lavelle, who holds the Ellen and Dixon Long Professorship in World Affairs, an endowed chair he established in the College of Arts and Sciences. He also received an update about the Writing Resource Center, which will benefit from an operating endowment he created as a donor to Forward Thinking: The Campaign for Case Western Reserve University. Through his philanthropy, he has ensured that the kinds of research and education he once promoted in the college will continue to thrive.

When he tells the story of his own life, Long sounds like a novelist. He summons up visual details and snatches of conversation from decades past, making his listener feel like a witness to the events he describes. Among his diverse experiences, he notices recurrent themes and threads of continuity.

Born in Warren, Ohio, Long attended Western Reserve Academy, a private boarding school with historical ties to the university. His father ran a small firm that manufactured industrial welders. Although he didn’t go into business himself, Long remembers wanting to emulate his father. “I thought it was important at some point in my life to sit in the corner office and manage something,” he says. When his opportunity arrived, it took the form of a deanship: From 1976 to 1984, Long led Western Reserve College, which later evolved into the College of Arts and Sciences

Although he spent most of his academic career in his native Ohio, Long got to know other parts of the world first. He earned a bachelor’s degree in economics and English at Amherst College. After graduating in 1955, he was drafted and sent to Korea, where hostilities had just ended. “It was still dangerous, but not really life-threatening,” he recalls. By the time his tour of duty was over, he’d become fascinated by Asian culture, so he asked the army to discharge him in Japan. At Doshisha University in Kyoto, he found a temporary position teaching English. On his return to the United States, he earned a master’s degree in international relations from the Fletcher School of Law and Diplomacy at Tufts University.

Long was considering what to do next when he heard from a friend of his, Charles Britton II, scion of a prominent Cleveland family.

“Charlie said, ‘Look, I want to get in the boat-building business. I’m going to build a boat in Japan, outfit it with American hardware. I’d like to sail it back to the United States, and I need a crew.’” Knowing of Long’s interest in Japan, Britton asked whether he wanted to come and live near the boatyard, help with the final stages of construction and make the voyage.

“I did,” Long says, recalling how gladly he accepted the invitation. “I went and spent six months, lived with a Japanese family, continued to work on the language, went to the boatyard every day.” A third friend joined the expedition. “And in about January of 1959, we set out from Osaka, Japan, and had many adventures, of which I’ve written a little book called Westward Home, consisting of the newspaper articles I sent back to my hometown paper during the trip. They paid me $15 per article, and I wrote as many as I could to finance my trip. We arrived about a year later in Barbados, West Indies. It wasn’t quite all the way around the world, but it was a pretty good chunk: 20,000 miles. Good enough.”

By 1961, Long had enrolled in graduate school at Columbia University, where he proposed a dissertation on science and technology policy in postwar Japan. Although he traveled to Tokyo for his research, Long did much of the writing in Paris, where he landed a job with the Scientific Affairs Directorate of the Organization for European Cooperation and Development. “They were paying me to do exactly what I needed and wanted to do to finish my PhD,” he says. By the spring of 1967, degree in hand, he was ready to enter the job market.

It was then that Long heard about a faculty position at Case Institute of Technology (CIT). Given his interest in technological change, he welcomed the prospect of “teaching at an engineering school.” He didn’t know that a federation between CIT and Western Reserve University was imminent. “I signed a contract with Case Institute of Technology and came to work at Case Western Reserve University,” he says. “And then, 26 years went by.”

During those years, while he wrote articles and taught his classes, Long also participated in public affairs at the local, state and national levels. He produced reports for Congress on topics ranging from science policy to the future of the Peace Corps. Concerned about the impact of technological development on the natural world, he became active in the environmental movement. He was a founder of the East Branch Association, which sought to protect open space in Ohio’s Chagrin Valley, and he served as president of the Ohio Conservation Foundation, which advocated the implementation of federal environmental laws in the state.

As a dean, Long provided leadership in several areas that remain vital to the college’s mission. He encouraged the establishment of interdisciplinary programs and courses. He created a fellowship program for outstanding graduate students, offering full tuition support for three years. In the face of budgetary pressures, he insisted that the college continue to offer all of its traditional liberal arts programs, including classics, modern languages, music and theater. He created incentives for faculty members to obtain external support for their research, and he raised funds to renovate college facilities, especially on the Mather Quad. He still recalls the “loyal, caring members” of the Flora Stone Mather Alumnae Association who aided his efforts to make improvements to Harkness Chapel, Haydn Hall and especially Guilford House.

A Succession of Gifts

Three years before he retired, Long made his first endowment gift to the university. In memory of his first wife, biologist and educator Ellen Corning Long, he created a fund at the Frances Payne Bolton School of Nursing to support the teaching of humanistic nursing. More recently, he has supported the College of Arts and Sciences in two areas to which he was committed as a professor and dean: international studies and writing.

One gift established the Ellen and Dixon Long Professorship in World Affairs (initially an associate professorship) in 2006. Lavelle, its first occupant, is an expert on the U.S. government’s relationships with domestic and international financial institutions. Since assuming the chair, she has written two books: Legislating International Organization: The US Congress, the IMF, and the World Bank (2011) and Money and Banks in the American Political System (2013).

If not for the professorship, Lavelle says, she could not have completed the research for these projects. A discretionary fund provided by the endowment covers her expenses when she visits archives, interviews officials or attends briefings, whether in the U.S. or overseas. The fund also enables her to present her work and interact with other scholars—economists and historians as well as political scientists—at international conferences. 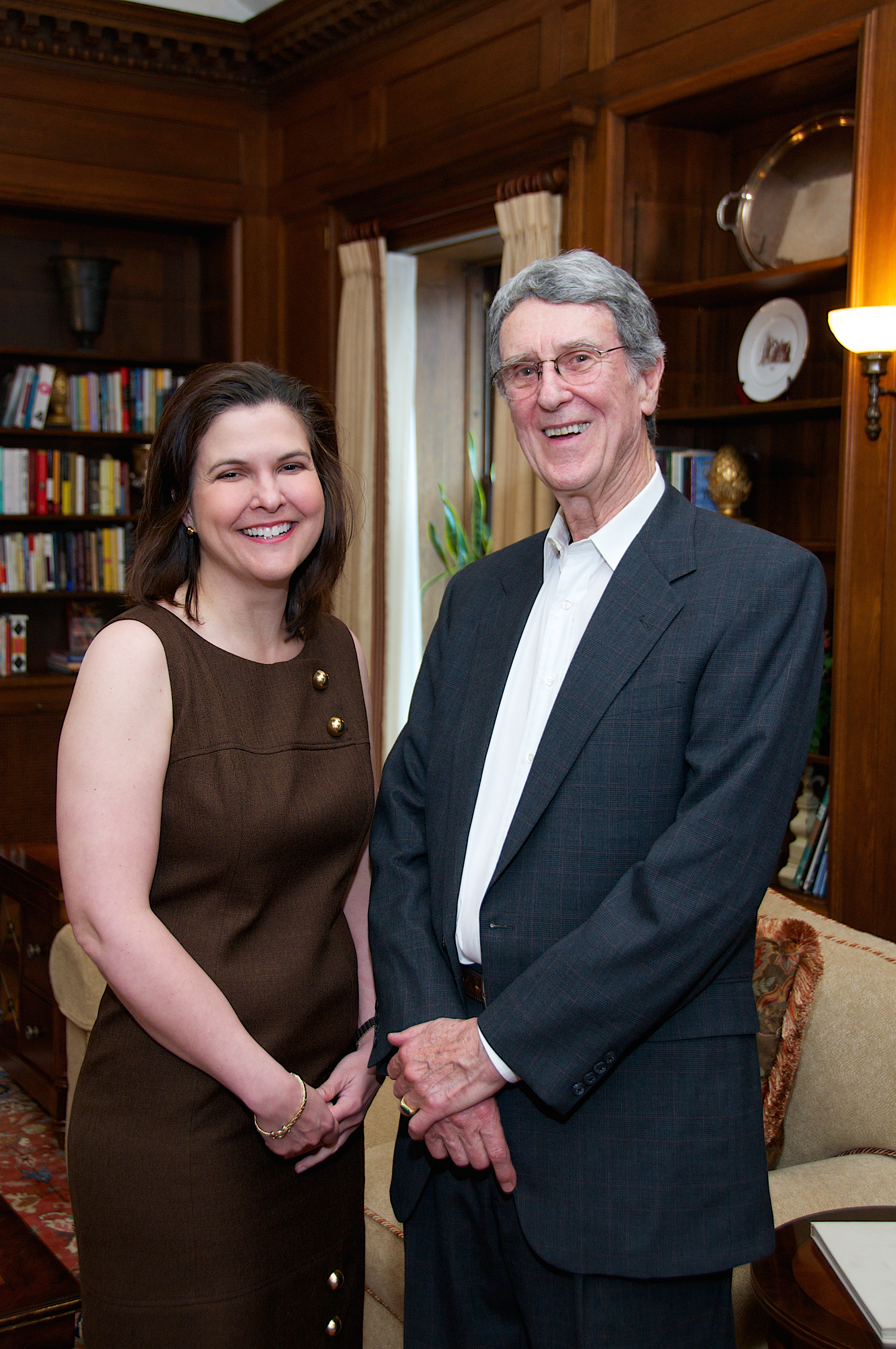 Political scientist Kathryn Lavelle, the inaugural Ellen and Dixon Long Professor in World Affairs, met with Long during his campus visit in May. Photo by Daniel Milner.

Lavelle’s research, in turn, has enriched her teaching. For instance, she drew on material from her 2011 book to design an advanced seminar, Financial Politics in the United States and the World. Students who took this course in Fall 2012 nominated her for the Carl F. Wittke Award for Excellence in Undergraduate Teaching.

Long’s support, Lavelle says, “has made a huge difference in my career. I really appreciate what he’s done for our university and for our students.”

The Writing Resource Center, the recipient of Long’s latest endowment gift, is based in the English department but provides one-on-one instruction to students across the university. In 2013-14, more than 1,200 undergraduate and graduate students conferred with center consultants, and the number of tutoring sessions exceeded 4,100. Center Director Megan Swihart Jewell notes that these figures are twice as high as they were in 2007.

Much of the increased demand for the center’s services is attributable to SAGES (the Seminar Approach to General Education and Scholarship). Since 2004, all Case Western Reserve undergraduates have been required to complete a series of discussion-based, writing-intensive SAGES courses on topics of their choice. As a result, students are working to improve their writing over several semesters, not just in a first-year composition course. Rising numbers of international students have also contributed to the center’s growth.

Most of the writing consultants have doctorates in English, while others are English graduate students. They offer tutoring at multiple sites around campus as well as online. Many also assist faculty members with writing instruction in SAGES or lead seminars of their own.

In May, Long met with representatives of SAGES and the English department to learn about the center’s development. “From their description of what they’re doing, I think it’s a great program—I mean a really solid, well-thought-out program, with smart, well-trained people involved,” he says. “I was very pleased.”

After his visit ended and he returned to California, Long submitted the final changes to his new novel. Other publishing ventures still awaited his attention. Markets of Provence, a travel book he’d written with his second wife, Ruthanne Long, was scheduled to appear in a second edition; his collaborator on the project, Marjorie R. Williams, had previously worked with him to update a companion book, Markets of Paris.

Meanwhile, Long was planning to spend time with his children. He and his son, Samuel Dixon Long (WRC ’88, MGT ’92), share a hobby: beekeeping. And with his daughter, Maud-Alison Corning Long, he was planning a trip to a part of the world he had never seen.

“What I want is fresh experiences,” Long explained in May. “I’m going to the Galápagos Islands with my daughter at the end of the summer with her two little boys. That’s fresh. I started learning Spanish a couple of months ago. That’s fresh. You can see what I’m looking for.” His voice conveyed the same eagerness he remembers feeling when he set sail from Osaka 55 years ago.