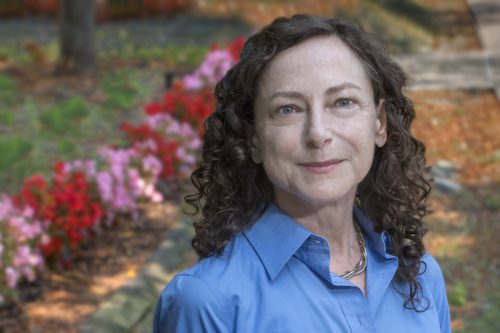 Elisabeth Werner, a member of the mathematics faculty since 1989, has discovered new applications for convex geometry. Photo by Mike Sands.

Most of us are familiar with three-dimensional convex shapes—a category that includes spheres of all kinds, from baseballs to planets, and rearview mirrors that make objects appear farther away than they actually are.

Case Western Reserve mathematician Elisabeth Werner thinks a lot about convex shapes, but not just in the usual three dimensions. She analyzes them in any number of dimensions—two, four, 157, you name it. Visualizing a four-dimensional shape, let alone a 157-dimensional one, can be mind-boggling, Werner admits, but the effort can yield rich insights that don’t emerge from analyses in fewer dimensions.

Those efforts, as well as many others, recently earned Werner a 2014–15 Faculty Distinguished Research Award. She is one of five CWRU faculty members receiving the award this year.

Werner’s work has greatly advanced convex geometry, says David Singer, professor and interim chair of the Department of Mathematics, Applied Mathematics and Statistics. One of Werner’s best-known results involves a branch of the field known as approximation theory, which mathematicians use to analyze complicated, many-dimensional shapes, often with help from computers. Werner discovered that approximating a convex shape’s volume by creating a simpler shape from randomly chosen points can work as well as methods requiring far greater computing resources. “This tells you there is something like a free lunch, which normally doesn’t happen,” Werner says.

A CWRU faculty member since 1989, Werner has had continuous research funding for 25 years, including a 22-year (and counting) string of individual grants from the National Science Foundation (NSF). Together with Szarek, she has also received a $1.4 million NSF Focused Research Group grant, in which CWRU led a collaboration with Kent State, the University of Michigan and the University of Missouri. In another form of recognition, Werner was named an inaugural fellow of the American Mathematical Society in 2012.

When her Faculty Distinguished Research Award was announced in April, Werner was on leave at the Institute for Mathematics and its Applications (IMA) at the University of Minnesota. Normally, President Barbara R. Snyder, Provost W. A. “Bud” Baeslack III and Vice President for Research Suzanne Rivera would have made a surprise visit to her classroom to share the news. But a trip to Minneapolis seemed impractical, so they called Werner instead. They also sent advance word to her IMA colleagues, who started dropping by her office, hoping to see her reaction.

“People would pop into my office with all kinds of strange requests,” Werner recalls of that afternoon. But once she got the call, she understood what was going on.

“I’m really grateful,” Werner says. “It means a lot to me to be recognized in this way.” 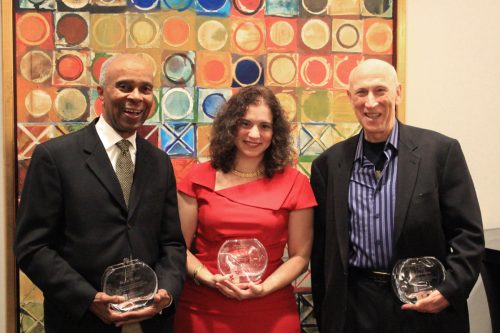 During Homecoming Weekend this fall, three winners of 2015 Alumni Awards from the College of Arts and Sciences were on hand to receive their honor. Harold D. McRae (left) and Malcolm H. Gissen (right), both members of the Adelbert College Class of 1965, were named Distinguished Alumni of the Year. Santina Protopapa (CWR ’00) was named Young Alumna of the Year.

To submit nominations for the 2016 Alumni Awards, please visit artsci.cwru.edu/development/alumni-awards. The deadline is Dec. 31, 2015. The awards will be presented during Reunion and Homecoming Weekend, Oct. 13-16, 2016.

At the end of every academic year, Case Western Reserve honors faculty members who have demonstrated an exceptional commitment to the education and development of undergraduate and graduate students. Four members of the college’s faculty were among the recipients of university awards this spring:

Rebecca Benard, instructor in the Department of Biology, received the Carl F. Wittke Award for Excellence in Undergraduate Teaching.

Karen Potter (GRS ’89), professor and chair of the Department of Dance, received the John S. Diekhoff Award for Graduate Mentoring.

Henry Adams, the Ruth Coulter Heede Professor of Art History, is the author of Thomas Hart Benton: Discoveries and Interpretations.

Timothy Beal, the Florence Harkness Professor of Religion and chair of the Department of Religious Studies, was one of 36 authors to receive a 2015 Public Scholar Award from the National Endowment for the Humanities. The awards program promotes the publication of scholarly books conceived and written for general audiences. Beal is at work on a cultural history of the New Testament Book of Revelation.

Erin E. Benay, assistant professor in the Department of Art History and Art, is the co-author, with Lisa M. Rafanelli, of Faith, Gender and the Senses in Italian Renaissance and Baroque Art: Interpreting the Noli me tangere and Doubting Thomas.

Robert W. Brown, Distinguished University Professor and Institute Professor in the Department of Physics, has published “Challenges in Faculty Entrepreneurship in the Sciences: Becoming an Entrepreneur but Staying at the University,” a chapter in the book Embracing Entrepreneurship Across Disciplines: Ideas and Insights from Engineering, Science, Medicine and Arts, edited by Satish Nambisan.

Michael W. Clune, professor in the Department of English, is the author of Gamelife: A Memoir, which was excerpted in the September issue of Harper’s Magazine.

Alan J. Rocke, Distinguished University Professor and the Henry Eldridge Bourne Professor of History, was one of two chief historical advisors for the PBS series The Mystery of Matter: Search for the Elements.

Peter A. Shulman, assistant professor in the Department of History, is the author of Coal & Empire: The Birth of Energy Security in Industrial America.

Two master’s students in the Department of Art History and Art obtained highly competitive graduate internships this year. Mason McClew spent the summer at the National Gallery of Art in Washington, D.C., while Molly Phelps interned at two Boston institutions: the Museum of Fine Arts and the Isabella Stewart Gardner Museum.

Erin Milne (GRS ’09) has been named director of assessment and planning in the Office of Academic Affairs at Massachusetts College of Liberal Arts.

Carolyn G. Truesdell (FSM ’61) has been elected chair of the board of managers for the public health care system in Harris County, Texas.

William R. Heath (GRS ’66, ’71) is the author of William Wells and the Struggle for the Old Northwest.

Dorothy Anne Essman Richmond (GRS ’70), professor and vice chair of pediatrics at Georgetown University Hospital, has received the 2015 “Wall of Achievement” alumni award from the Wellston School District in Ohio, where she earned her high school diploma.

Frank Calcagno, Jr. (WRC ’77, GRS ’79), a senior security adviser and engineering geologist based in Fairfax, Va., has been named to the security and safety services team of Gannett Fleming, Inc.

Thomas Li-Ping Tang (GRS ’77, ‘81, psychology) has been elected as a distinguished alumnus by the faculty of the Department of Psychology at Chung Yuan Christian University in Taiwan. Tang is a professor of management at Middle Tennessee State University.

Michael Finley (CWR ’93) was promoted to senior scientist at Merck in January 2015. A member of the corporation’s Screening & Protein Sciences group, he has led high-throughput screening campaigns for therapeutic indications including diabetes, neuropathic pain and schizophrenia.

Anand Swaminathan (CWR ’97, MGT ’99), Accenture Digital’s managing director, was named to Fortune’s “40 Under 40” list of the most influential young people in business.

Adam Evans (CWR ’05, MGT ’09) has been named a Bingham Fellow and Professor of Management and Leadership at Transylvania University in Lexington, Ky.

Samantha Cataldo (GRS ‘12) has been named assistant curator at the Currier Museum of Art in Manchester, N.H. Her responsibilities will include acquiring post-World War II art and curating exhibitions, including the museum’s Contemporary Connections series.

SEND US YOUR NEWS

The notes in this section are compiled from news releases, other publications and messages from alumni like you. We want to hear about milestones in your life. Please send your updates, with your graduation year, to artsci@cwru.edu.