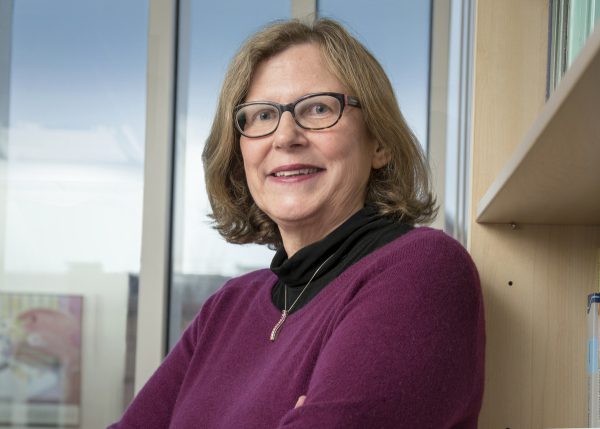 Anyone who has chatted with a toddler has almost certainly heard the word “wabbit” swapped for “rabbit,” “nana” for “banana,” or the like. And for good reason: Most children make such mistakes as they learn to speak, and stop making them as they grow older.

But what about the children who don’t stop?

Barbara Lewis (GRS ’87), a professor in the Communication Sciences Program in the Department of Psychological Sciences, has spent more than 25 years trying to explain why some people remain burdened by speech errors long after others outgrow them. A licensed speech-language pathologist who earned her master’s and doctoral degrees in communication sciences (COSI) at Case Western Reserve, Lewis has since 1988 led an investigation into the genetic basis of speech sound disorders. In fall 2014, she was awarded a five-year, $3.1 million grant from the National Institute on Deafness and Other Communication Disorders (NIDCD) to identify risk factors for these conditions.

Speech sound disorders come in many different flavors. Children with mild disorders may have trouble producing a single sound like the “r” in “rabbit,” or they may break one or more of the rules that govern how sounds are combined to form words—consistently failing, for example, to pronounce both of the consonants at the beginning of words like “broken” (“boken”) and “spoon” (“poon”). Children with more severe speech sound disorders, such as developmental apraxia, may lack the ability to put the basic building blocks of speech together in the proper order, or to move the lips, jaw and tongue correctly in order to produce intelligible sounds.

Approximately 16 percent of preschool students have some kind of problem managing speech sounds. Most overcome these early difficulties by the time they reach kindergarten. But 5 or 6 percent of children continue to struggle, and they’re also more likely to have other communication and learning impairments, like difficulty reading or understanding language. This nexus of challenges can lead to poor academic performance, and has even been correlated with lower socioeconomic status.

Currently, however, researchers cannot predict which kids will improve on their own, and which ones will be prone to persistent speech sound disorders. Nor do they understand, in most cases, exactly how or why these disorders arise. Occasionally the cause is clear: A child may have a physical impairment like a cleft palate, or suffer from a neurological condition like cerebral palsy. But more often, Lewis says, speech sound disorders have no known etiology.

That was certainly the case when Lewis entered the COSI doctoral program in 1984. Having worked for several years as a speech-language pathologist, she was particularly intrigued by the enigmatic origins of speech sound disorders. Her advisor, Dorothy M. Aram (GRS ’72), suggested that she consider genetic factors—something that had not yet been investigated—and Lewis was off and running. She wrote a dissertation demonstrating that speech sound disorders run in families, and shortly thereafter landed one of the first grants awarded by the NIDCD to fund research into the genetic basis of these maladies.

The Human Genome Project had not yet begun, however, and genetic studies looked very different than they do today. Rather than interrogate DNA with the techniques of modern molecular biology, Lewis used an early-model desktop computer to analyze the family trees of more than 500 children with speech sound disorders, hoping to suss out how the conditions were passed from parents to children.

“Now people joke that everything is genetic,” Lewis says. But when she first demonstrated that at least some severe speech sound disorders were in fact heritable, even some scientists didn’t believe it.

That changed rapidly. By the late 1990s, Lewis had joined forces with several faculty members in the CWRU School of Medicine. She was analyzing the DNA of the families in her cohort with the help of geneticist Sudha Iyengar, a professor of epidemiology and biostatistics. She had also enlisted H. Gerry Taylor, a professor of pediatrics and a neuropsychologist, who helped identify a number of so-called endophenotypes: measurable skills, like the ability to remember or manipulate speech sounds, that could be associated with speech sound disorders and correlated with particular genes.

Not long afterwards, Lewis and Iyengar recruited Catherine M. Stein, now an associate professor of epidemiology and biostatistics in the School of Medicine, to correlate the reams of genetic data that Iyengar was producing with the endophenotypes and disorders in the cohort—a cohort that had by then aged into adolescence, and whose progress Lewis continued to track into adulthood.

At first, Lewis and her team focused on genes that had been linked to dyslexia, a reading disorder associated with deficits in phonological awareness—the ability to identify and manipulate the sounds that make up words. Soon, however, the researchers extended their investigation to include genes implicated in attention deficit hyperactivity disorder, learning disabilities and just about anything else related to cognition, brain function or neuronal activity. In 2012, as part of an NIDCD-funded project run by Iyengar, they began analyzing each subject’s entire set of genes for 2.5 million common variations—an effort that has already generated whole-genome sequence data on some high-risk families.

By correlating those variations with particular endophenotypes and with diagnosed speech sound disorders, Lewis and her colleagues hope to establish genetic signatures that can be used to predict whether a child will develop a persistent speech problem. That, in turn, should allow speech-language pathologists to intervene earlier with more carefully targeted therapies.

Together with other researchers in America and Europe, Lewis and her team have already linked a handful of genes that play a role in neural development to endophenotypes like phonological awareness in individuals with speech sound disorders. But many questions remain unanswered. 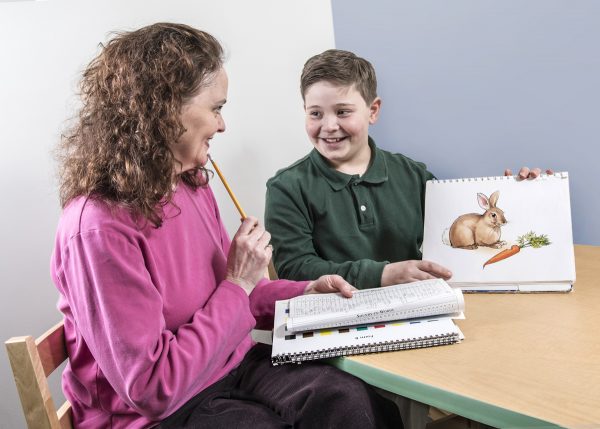 For one thing, the evidence suggests that the simplest scenario, in which a given speech disorder is caused by a variation in a single gene, is also the least likely. Instead, it appears that different genes—and maybe even different combinations of genes—are responsible for causing speech sound disorders in different people. “It’s a lot messier than we thought when we started,” Lewis says.

What’s more, researchers don’t yet understand how the genes they have identified shape children’s brains in ways that cause speech and language problems. That’s where Lewis’ latest grant comes in. In addition to continuing her research into genetics, this new study will take yet another factor into account: hormone levels.

Some of the genes that Lewis identified in her previous work regulate levels of the hormone estrogen, which is involved in early brain development. This led her to wonder if differences in estrogen levels might also help predict which children are at greatest risk of developing persistent speech disorders.

To find out, Lewis is currently recruiting a new cohort of approximately 200 children. As before, she will track them to see how they fare over the long term. But this time, she will have their estrogen levels tested at UH Rainbow Babies & Children’s Hospital, and add that information to her stew of data. With any luck, what she learns could add a hormonal biomarker for speech sound disorders to her growing list of possible genetic ones.

Even then, Lewis doubts that her work will be done. After all, when she first began this odyssey, she expected to be finished within a couple of years. “The more you do this,” she says, with over a quarter-century’s worth of hindsight, “the more complicated it gets.”

Alexander Gelfand is a freelance writer in New York City.