When Stories Surprise Us 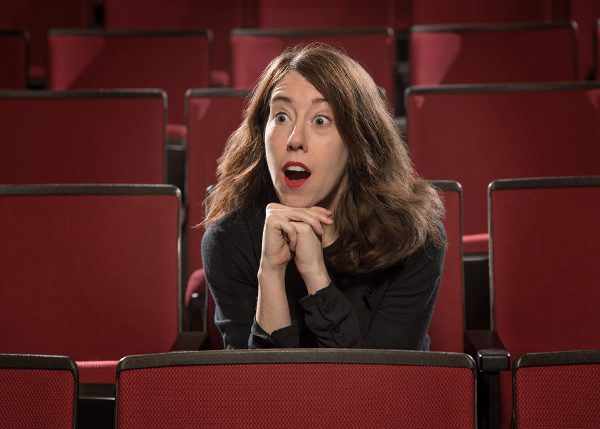 In her first book, Assistant Professor Vera Tobin explores the delight that readers and viewers take in narrative surprises, such as plot twists or a fictional character’s unexpected actions. Photos by Mike Sands

When done well, stories with sudden plot twists or surprise endings can be intensely satisfying for audiences. At the end of Agatha Christie novels or films like The Sixth Sense, individual parts of the narrative click artfully into place in a final, dramatic moment, thrilling readers and viewers alike. Yet our ability to experience and appreciate narrative surprises like these wouldn’t be possible without a few quirks of the human brain, says Vera Tobin, assistant professor in the Department of Cognitive Science at Case Western Reserve University. 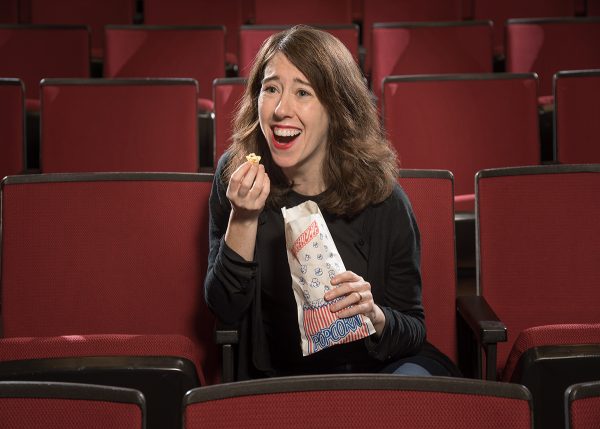 Tobin, who studies the connections between human cognition and narrative, says that our mental tools for making sense of the world can be manipulated by skilled storytellers to elicit both surprise and delight. Exactly how they go about doing that is a topic she explores in her first book, Elements of Surprise: Our Mental Limits and the Satisfactions of Plot (Harvard University Press).

In this edited interview, we talked to her about what cognitive scientists can learn from surprise endings and plot twists, and how storytellers exploit our natural cognitive processes to achieve an artistic end.

You’re a cognitive scientist—why study narratives? What can that teach us about human cognition?

Well, narratives give us rich, diverse, complicated ways of communicating with one another. But they also give us a wonderful way to explore our assumptions about the world, and to identify habits of mind that can mislead us. You can’t always do that in the lab.

In cognitive science, we have a problem—you can’t directly see the process of cognition. You can do brain imaging in a laboratory, but that doesn’t show you people’s thoughts. Our primary means of getting at that right now is to ask people questions about what they think. Humans are not very reliable reporters, though, and a lot of the most interesting parts of the process happen at a level that is wholly or partially inaccessible to consciousness.

We can also do behavioral experiments that give us more information about those interesting bits. But when we test behavior in the lab, we mostly learn about how people think in a lab—not in their everyday lives.

By looking at cognition “in the wild” using books and movies, we can start to open up our understanding not just of individual narratives, but also of the way we think about people and events in the real world. We gain insight into cognitive processes by studying how we relate to fictional characters, for example, or the expectations we have as we read a narrative. As readers, we often project our experiences onto the characters in a novel. But we do something similar even when we aren’t reading; our own experiences deeply influence the way we think about ourselves and other people. It’s inescapable.

So why focus on surprises specifically?

As cognitive scientists explore how the mind works, and how people understand other minds, often the things we find out lead us down one of two possible roads. One is a triumphal story of human cognition—look at this amazing, marvelous machine that is the human mind! Behold all of the miraculous things we can do! And the other is a sort of sad trombone, saying, “I’m so sorry to tell you, but your brain is fundamentally terrible at everything. You’re a cobbled-together mass of biases and defects.”

Looking at “surprise stories” lets us navigate both of those extremes at once. When we turn to stories that hinge on surprises, we get to see both our cognitive triumphs and our cognitive biases in action.

Stories like detective novels or thrillers, for instance, depend on the fact that we humans make inferences in predictable ways, even when they lead us astray. In narratives, we see characters get things wrong all the time—they’re wrong about their circumstances, about other people, about themselves. Those situations often stem from textbook examples of cognitive bias. In the examples I look at, not only do characters make mistakes, but we readers are led to make mistakes along with them. This process reveals our own cognitive biases, but it also gives us an experience that is satisfying, delightful, even edifying. 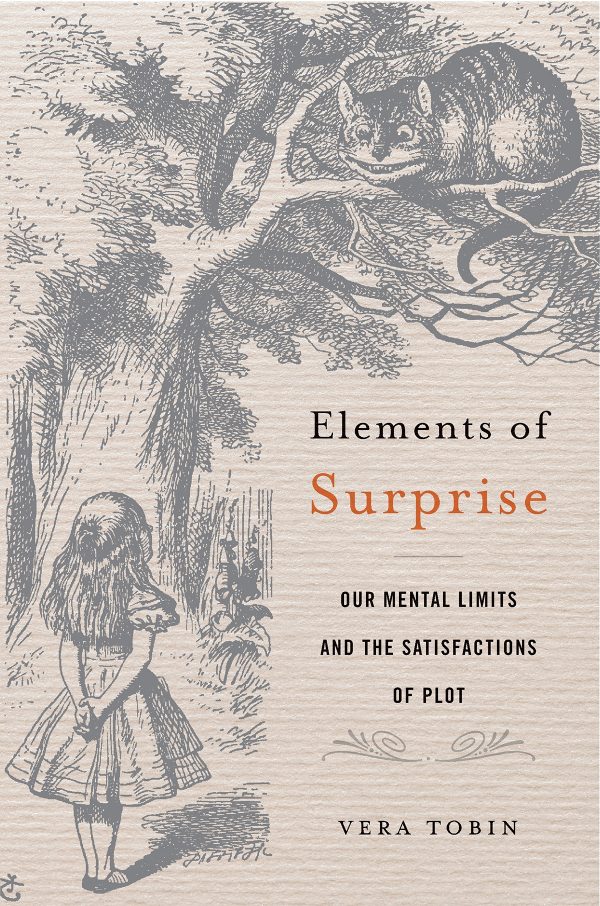 In the book, one of your big themes is the “curse of knowledge”—the idea that information you encounter in one place affects how you read the rest of the narrative. Is that an example of a “cognitive bias”?

Absolutely. Our thinking is always influenced by things that we know, or at least think we know. Once you know the answer to a puzzle, for example, or know someone’s intent when they act, it’s very hard to put yourself in the mindset of not knowing that. Information about one perspective suffuses the way we think about other perspectives. It’s a well-known cognitive bias, one that affects both how we think about the past and how we think about other people, and authors can take advantage of it to surprise readers.

Let me give a couple of examples. Ideas presented early on in a story can “curse” our reading by constraining the kinds of speculation we engage in about crucial plot elements. This is the consequence of a tendency known as “anchoring.” People tend to take initial suggestions or ideas as starting points for reasoning about a problem. Even when those ideas are obviously wrong, the next steps in our thinking usually involve making relatively small adjustments away from them, rather than throwing them away and starting over. This helps red herrings lead us down dark alleys and keep us from arriving at the correct solution too soon.

Later in a narrative, when an author offers important new information, the story can make you feel that you were given every chance to guess the outcome of an event, even if it wasn’t obvious ahead of time. The trick is in feeding you new information that seems knowable in retrospect from the information the author did provide. Think of every good detective story you’ve read—when the culprit is revealed, the author gives you info that wasn’t previously available, but at the same time makes you feel like you could have put together the clues yourself. And characters, not just plots, can be the subject of a well-made surprise.

For an author, creating such a surprise is a real challenge. If you’re trying to manage this sort of experience for your reader, you need to withhold information strategically, or structure it in such a way that a reader won’t predict an obvious plot turn before it happens, while also making that turn feel inevitable in retrospect. That means authors have to deal with their own curse of knowledge—they know the whole plot but have to figure out what info to withhold, how to withhold it and when. It’s really central to the reading experience and the writing experience of these kinds of stories.

Do you have a favorite example of a well-made surprise?

Sure! One of my favorite examples occurs in William Faulkner’s novel As I Lay Dying. In the book, there’s a teenager named Jewel who starts acting odd, sleeping in, failing to do his chores. His whole family assumes he must be slacking off because he’s secretly spending his nights with a lover, and they’re all guessing which woman it is. It turns out he’s sneaking away to work so he can afford to buy a beautiful horse he really wants—and when you discover this as a reader, you’re really surprised. Just like Jewel’s family members, you weren’t speculating about other reasons he could be running off. You were misled by the characters’ own mistaken assumptions: that he was going out to see a woman, even though you see him in earlier scenes pining away for the horse.

So what makes this a well-made surprise? It has several crucial ingredients. We get information earlier in the story—Jewel’s desire for the horse—that, in retrospect, holds the key. We have incorrect speculation presented to us not in the author’s own voice, but through characters who are mistaken, so the author can take the speculation back later without being inconsistent. When we do find out the truth, the new information isn’t just new: It gives us a deeper, more satisfying understanding of what has been going on. And it feels like something we could have guessed all along—we just didn’t.

All of these ingredients, taken together, mean that we don’t feel deceived or cheated. On the contrary, we feel that a new truth has been revealed. 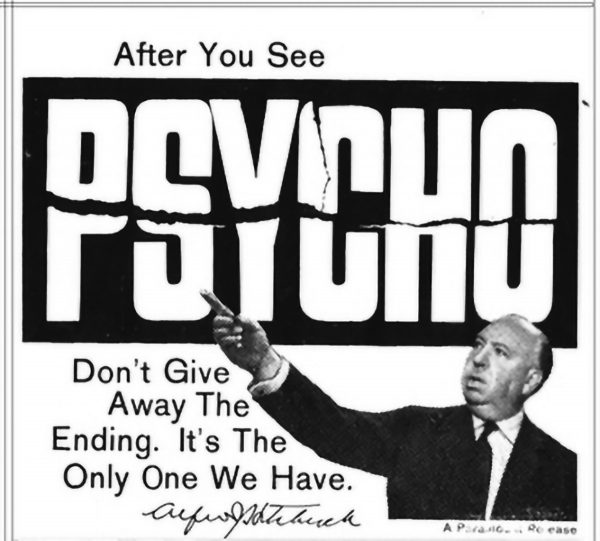 You don’t have to be William Faulkner to do this. Even stories that don’t invest a lot in character depth—the works of Agatha Christie, say—will use these same strategies.

How does that draw readers in, though? Why would we enjoy being fooled?

That’s an interesting question: Why should we enjoy feeling that we made a mistake? Well, learning something new always involves discovering that what we already knew was wrong, or insufficient. When such learning occurs as we read a well-managed story, then the story produces in us that experience of insight and discovery.

There’s a good bit of research on what makes overturned expectations feel like satisfying insights in everyday life. We like it best when the pieces seem to fit together in a new way, all at once. We want a sense of suddenness, a sense of novelty and a sense of rightness. But stories don’t have to leave these things to chance. They can conspire with your mind and its natural tendencies to help insure that you have this experience.

It’s a bit like stage magic—the success of those illusions shows us some of the edges and seams in how we perceive what’s in front of us, how we pay attention and how we process information. In that sense, narrative surprise is a magic trick, too, except that it’s sleight of hand for how we think instead of how we see.

David Levin is a freelance science and technology reporter based in Boston.