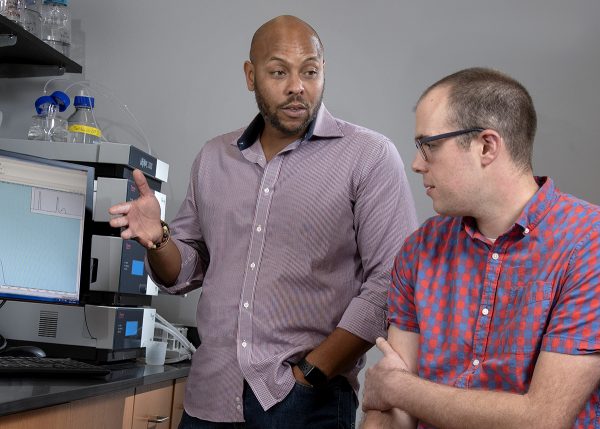 From left: Blanton S. Tolbert served as an advisor and mentor to Christopher Morgan (GRS ‘18), who carried out his doctoral research under Tolbert’s direction. Photo by Mike Sands.

No matter what symptoms or damage it may cause in the human body, a virus is nothing more than the sum of its molecules—the sinewy curves of long proteins; the ladder-like string of atoms that form the backbone of DNA or RNA. Those molecular shapes determine how a virus interacts with its host cells, and, in turn, how it leads to human disease. Gaining an intimate understanding of its structure can be a key step in finding a cure.

Blanton S. Tolbert takes this idea to heart. A professor in the Department of Chemistry at Case Western Reserve, he’s working to reveal the mysteries of viruses on a molecular level.

“If you can show how a protein or an RNA molecule adapts its shape, you can better understand how that molecule might function, and what role it may play in a given disease. Once you do that, you can start to discover new ways to treat the disorders it creates,” he says. 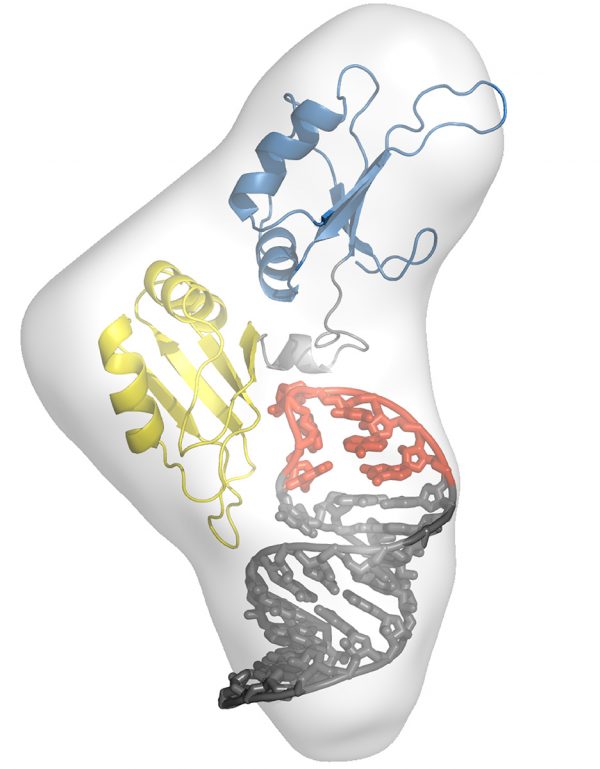 This image, taken with nuclear magnetic resonance spectroscopy, shows the three-dimensional structure of a human protein hijacked by RNA from the human immunodeficiency virus (HIV). Courtesy of Blanton S. Tolbert

Tolbert, who describes himself as both a structural biologist and a biophysical chemist, wants to understand how those molecular shapes affect the biology of HIV, the virus that causes AIDS. HIV infects immune cells with a single strand of RNA, hijacking their internal machinery before killing them outright. Eventually, this onslaught wipes out the body’s ability to fight infection, so that even illnesses as common as a winter cold can be fatal.

Recognizing his contributions to our knowledge of how the virus works, the National Institutes of Health recently invited Tolbert to join its Office of AIDS Research Advisory Council, a group of roughly 30 distinguished scientists who help NIH decide how to allocate funding to investigate the disease. Further research is especially important, Tolbert says, given the need to address HIV’s
long-term health effects.

“Now that we have very potent therapies, we’re now seeing people in their 60s and 70s who have lived with HIV for decades,” says Jonathan Karn, director of the Case Center for AIDS Research at the CWRU School of Medicine, who collaborates closely with Tolbert. “Many of these patients lead full, healthy and productive lives. But HIV still persists in their bodies despite lifelong adherence to medication. Even in well-treated individuals, the virus can affect the brain and cause cognitive deficits, increase the risk of cancer and contribute to cardiovascular disorders. These HIV-associated co-morbidities become a bigger issue as patients age.”

To prevent this outcome, doctors need ways to eradicate the virus entirely, or at least stop it from rebounding when treatment is interrupted. But both goals continue to elude medical researchers.

Tolbert says that the structure of the virus’ RNA can provide tantalizing clues. “The HIV virus has effectively learned that it can take over a cell’s machinery, its proteins, and use it to replicate itself. But how does it manipulate those proteins? That’s the big question,” Tolbert says. “That’s what we’re trying to figure out by determining its structures. We need to understand its physical attributes before we can understand how to stop the mechanisms it uses to affect the body.”

Revealing the structure of HIV is not as simple as just taking its picture. Long molecules like the virus’ RNA aren’t static objects that sit conveniently still for a portrait; rather, they’re dynamic and floppy, constantly moving and refolding like a loose paper streamer in the wind. 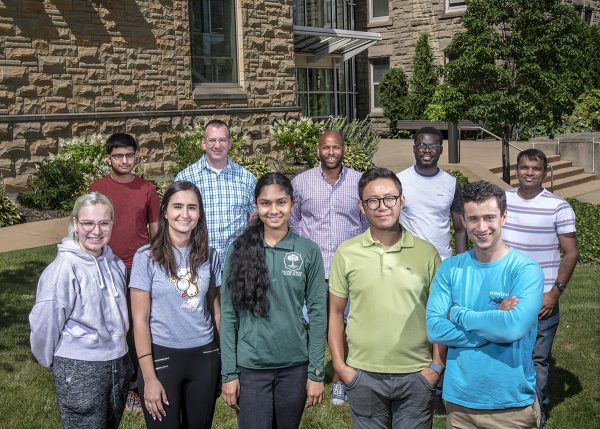 “RNA isn’t just one shape,” Tolbert explains. “It’s a whole ensemble. The molecule may need to be contorted one way to interact with certain machinery inside a cell, but it’s not exclusively holding that shape. There may be other, more high-energy shapes that are harder to observe, but can reveal new insights on how the molecule works.”

His research group uses multiple techniques to identify the myriad shapes of HIV’s RNA. It’s an ongoing process, but the information it is generating has already proven invaluable to virologists like Karn and his colleagues. Karn cites as one example Tolbert’s research on a molecule called “7SK snRNA,” which delivers key proteins and other signals to HIV to kick-start its replication cycle.

“One of the big questions has been, How does the virus get switched on and off?” Karn says. “Blanton has identified 7SK snRNA as a key intermediary in that process. We had only hypothesized that it could interact with an HIV protein called ‘Tat,’ which is responsible for the virus’ ability to replicate. Blanton did the detailed biophysical studies to show how and where the cellular RNA and HIV Tat protein interact. As a scientific achievement, understanding that is really huge, and opens the door to drug discovery in this area.”

Developing a drug that blocks the Tat mechanism within a cell could change how HIV is treated, Karn adds. “It would stop HIV from replicating. If you do that, you could potentially stop latent reservoirs of the virus from forming in the body, or stop the virus from reemerging after going into hiding.”

Pieces of the Puzzle

Tolbert’s drive to uncover weak points in the virus comes as no surprise to his colleagues. Amanda Hargrove, assistant professor of chemistry and biochemistry at Duke University and a close collaborator of Tolbert’s, notes that he’s constantly thinking about how his work fits into a bigger picture.

“One of the things that really impresses me about Blanton is how dedicated he is to translating basic science into something that can help society in the long term,” Hargrove says. “He really feels that the whole point of everything we do is to find new treatments for patients.”

Tolbert got his start in science as an undergraduate at the University of South Carolina. One of his professors noticed his budding interest in chemistry and offered him a chance to do hands-on laboratory research. He quickly fell in love with it.

That experience led to a summer residency at the University of Rochester, where Tolbert joined a lab engaged in mapping the three-dimensional structure of proteins. “The National Institutes of Health had just announced a huge protein structure initiative, where they were trying to determine the structure and fold of every protein in nature,” he recalls. “It felt like solving a puzzle. You can’t directly see the molecules, but you can see how they interact with different wavelengths of light, and then infer how the pieces of the puzzle come together. It requires mastering a few different techniques, but that was part of the intrigue.”

The work sparked his interest in biochemical structures and influenced his decision to stay at the University of Rochester to earn his doctorate. But he didn’t begin studying RNA until he was halfway through the program. At that point, Tolbert found himself in a situation every graduate student dreads: His advisor left for another job, forcing him to shift to a whole new line of research. Tolbert ultimately joined another lab at the university that focused on RNA and HIV. After earning his degree, he became a postdoctoral fellow at the University of Maryland, Baltimore County (UMBC). 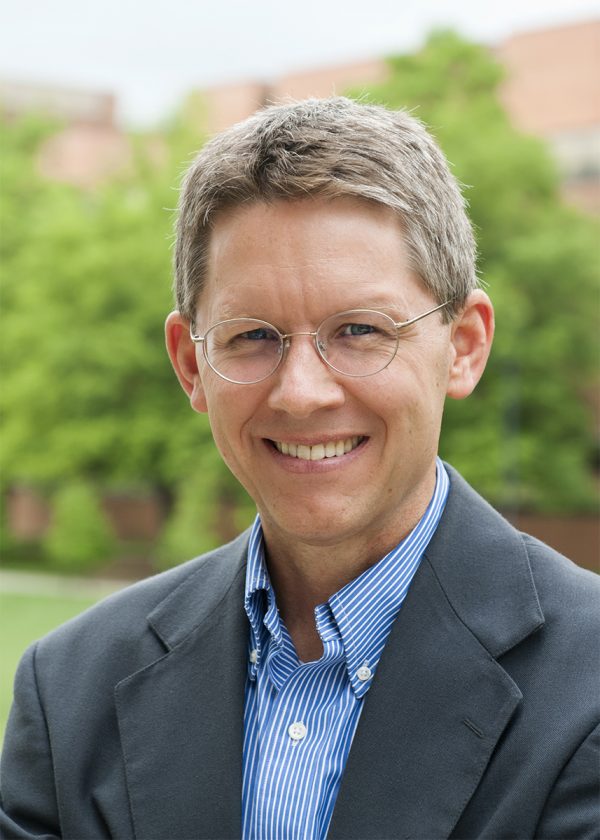 Michael Summers, a professor of chemistry and biochemistry, was Tolbert’s research mentor at the University of Maryland, Baltimore County.

“Blanton came to my lab with a great understanding of the chemistry of RNA, but he wanted to focus on bigger biologic questions,” says Michael Summers, a professor and HIV researcher at UMBC, who hired Tolbert for the postdoctoral position. “It was the perfect marriage—his work brought insights into areas we didn’t fully understand.”

It wasn’t just scientific insights that Tolbert brought to Summers’ lab, however. As the two collaborated, they became close friends, biking, hiking and spending time together outside of work. Before long, Summers realized the immense impact Tolbert had on him and his other colleagues.

“I work at one of the few universities in the country that has an African American president, Freeman Hrabowski,” Summers says. “He founded a scholarship program to bring diversity into science, technology and engineering fields, so I’ve done a lot of work over my career with African American undergrads. But with Blanton, I was able to have real conversations about the experience of minority researchers for the first time.”

Their discussions, Summers adds, “were hugely educational for me. They helped me think about some really tough topics around race, the experience of growing up as a black man in the South and the hurdles he faced on the way to becoming a scientist. He helped me become a far better mentor to my students. It’s funny how he came to my lab to learn, but I’m the one who did the vast majority of the learning in our relationship.”

After three years in Summers’ lab, Tolbert left for an assistant professorship at Miami University in Ohio, and in 2012, he accepted a tenure-track position at Case Western Reserve. In a relatively short time, he has become a valued senior member of the chemistry faculty, says professor and department chair John Protasiewicz.

“Blanton has been an amazing mentor for his students and postdocs, and has already helped recruit new students to the department,” Protasiewicz explains. “In 2016, he received the department’s very first Morton L. Mandel Award for a combination of his research accomplishments and service to chemistry at CWRU. And since then, he has only worked harder to grow his research program.”

“One of the big things that drives me is being able to get other people interested, excited and involved in their research,” Tolbert says. “I love science; I love what we do. But more than that, I love seeing other people develop professionally and become scientists themselves.”

“He wants you to learn, not just get results. He’s incredibly patient, and very open to letting you try new approaches, even if they take a while to learn,” says Christopher Morgan (GRS ’18), a postdoctoral researcher at CWRU who earned his doctorate with Tolbert. “He always wants to empower you to figure out problems yourself, but is there to help while you’re doing it. He’s just a really great mentor, boss and friend.”

David Levin is a freelance science writer in Boston.