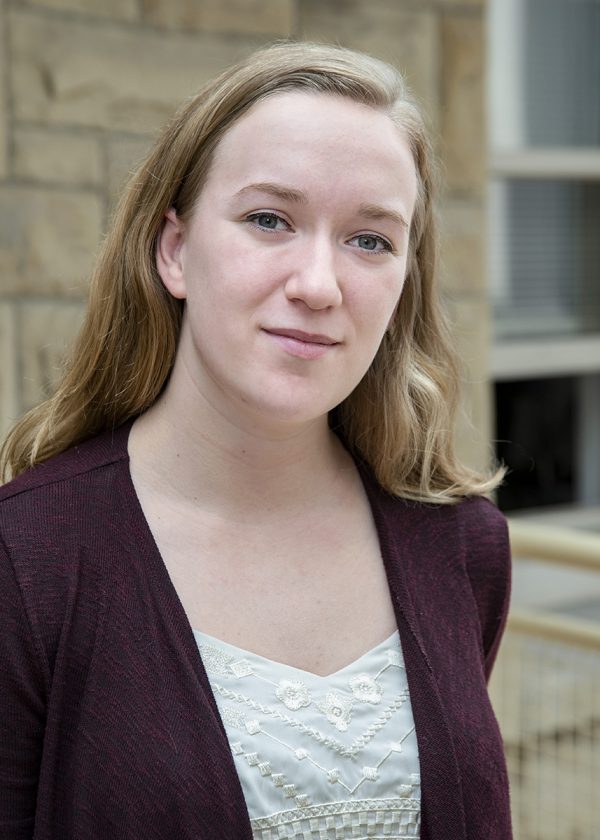 Megan Masterson (CWR ‘19) began pursuing a Master of Advanced Study in Astrophysics at the University of Cambridge this fall. Photo by Mike Sands.

Last February, Megan Masterson (CWR ’19) was sitting in a physics lab in the Rockefeller Building when an email popped up on her phone. She read the subject line—Gates Cambridge Scholarship Decision—and took a deep breath.

The prior fall, Masterson had applied for the prestigious scholarship, which fully funds postgraduate study and research in any subject at the University of Cambridge in England. More recently, she had interviewed with representatives from the scholarship committee in Washington, D.C. She was one of just 100 students in the country to have made it that far.

But Masterson was worried. She thought the interview had gone okay—not great—and during the weekend she spent in D.C. with the other candidates, she realized she was in the company of a bunch of “super smart” students. Would she make the cut?

Opening the email, she scanned a couple of introductory lines thanking her for her application. Then she read the next line, which appeared in bold: I am delighted to let you know that you have been awarded a Gates Cambridge Scholarship, many congratulations!

It didn’t seem real. Masterson was in such a state of shock, she considered forwarding the email to her parents to make sure she wasn’t dreaming. But she soon realized there was no cause for doubt. She excused herself from the lab, went out to the hallway and called home to deliver the good news.

Masterson, who left for Cambridge this fall to pursue a Master of Advanced Study in Astrophysics, was among 90 students from around the world—including 34 students from the United States—to win the scholarship this year. She was also the first CWRU recipient since 2013.

Established in 2000 with a $210 million gift from the Bill and Melinda Gates Foundation, the scholarship program recognizes students from outside the United Kingdom for outstanding academic achievement and social leadership. Its mission is “to create a global network of future leaders committed to improving the lives of others.”

Masterson’s exemplary academic record, diverse research experiences and extensive campus and community involvement made her a strong candidate for the scholarship, says Amanda McCarthy, assistant dean in the Office of Undergraduate Studies, who advises students applying for highly competitive national and international awards.

“Megan spent much of her college career conducting research across academic fields with various faculty members.” McCarthy says. “She excelled inside and outside the classroom and devoted an extraordinary amount of time and thought to her application.”

Masterson graduated in May with two bachelor of science degrees—one from CWRU’s joint program in mathematics and physics, and one in astronomy—and a perfect 4.0 grade-point average. In addition to her research on campus, she contributed to projects at other institutions through the National Science Foundation’s Research Experiences for Undergraduates (REU) program.

But Masterson also found time for varsity soccer—three years as a player and one year (post-injury) as a student coach. She was president of the college’s chapter of Love Your Melon, a national organization that raises funds for pediatric cancer research through sales of its distinctive “Love Your Melon” beanies and other apparel. And she spent the summer after her sophomore year teaching children about astronomy at the North Carolina Museum of Natural Sciences near her hometown of Apex, N.C.

Physics professor Harsh Mathur, who served as one of Masterson’s advisors, remembers being concerned that with all her extracurricular activities, her classroom performance might suffer. But he says he needn’t have worried.

“She was a dream advisee,” he recalls. “She did everything you hoped she would do and did it exceedingly well.”

Masterson says she has always loved math and physics, so her choice of a joint major in those fields was no surprise. She was also intrigued by outer space, but she didn’t consider astronomy as a second major until the fall of her sophomore year, when she took a class on stars and planets. She thought she might spend the rest of her life studying exoplanets, which orbit stars outside our solar system. Then a class on galaxies and cosmology got her thinking about “bigger stuff”— galaxy clusters, supernovae and black holes that are millions of light years away and detectable only by the most powerful telescopes. “The idea that we can learn so much from these faint signals from things that are so much bigger than our own world really interested me,” she says. 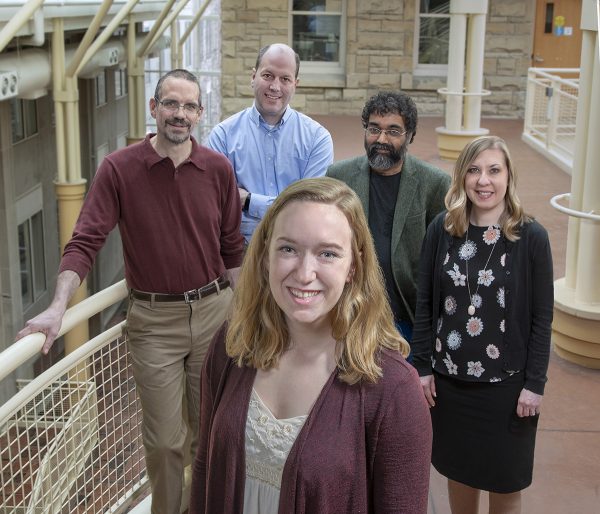 The next semester, Masterson approached Steven A. Hauck, II, professor and chair in the Department of Earth, Environmental and Planetary Sciences, to ask whether she could join any of his research projects. She ended up helping him investigate Mercury’s metallic core. Using laboratory data on the materials that make up the core, she developed a model of its formation and evolution. This data was later integrated with data from NASA’s MESSENGER spacecraft, which orbited Mercury for four years beginning in spring 2011.

Hauck, a participating scientist on the NASA mission, was impressed with Masterson’s efforts. “She was able to dive into a research problem and work on technical details very quickly, in a way I had not seen even among our top undergraduates,” he says. “It showed right away that she was a very special student.”

By her junior year, Masterson was taking advanced astronomy courses, which exposed her to phenomena such as dark matter, quasars and gravitational waves. At the same time, she was fulfilling the extensive requirements for her math and physics degree. Mathur, who taught one of her upper-level physics courses, remembers her arriving for each lecture already focused on what she wanted to get out of it.

“She knew what she wanted to do, so she learned in the context of her career goals,” Mathur says. “She set the agenda for her education.”

In the spring of her junior year, Masterson joined Hauck and two other CWRU faculty members—Distinguished University Professor Glenn Starkman, now chair of the Department of Physics, and Bo Li, assistant professor in the Department of Mechanical and Aerospace Engineering—on a different research project. Originally proposed by Starkman, the project looked at the potential impact that a hypothetical form of dark matter—macroscopic dark matter—would have on planetary bodies. If this type of dark matter existed, the researchers asked, would it leave a “signature” as it passed through planets—something analogous to the distinctive exit wound left by a bullet?

Masterson’s role was to collect, organize and analyze data acquired from a series of computer simulations. “She was able to find a good path in working with three different professors in different areas on a common problem,” Hauck says. “That shows a flexible and sharp mind.” Although the joint effort was ultimately hampered by technological limitations, Masterson used the research as the basis for her senior capstone project.

Finally, Masterson’s summers with the REU program enhanced her background in both of her majors. At Indiana University–Purdue University Indianapolis, she worked on inverse problems in electrostatics, a field of physics that studies electrically charged particles at rest and the forces between them. At the Center for Astrophysics | Harvard & Smithsonian in Cambridge, Mass., she helped analyze data from the Chandra X-Ray Observatory for a study of the gas composition of a merging galaxy cluster. Masterson was especially fascinated by this experience.

“The computer scripts I wrote to analyze the data were more than just numbers and functions,” she says. “They described the physical details of my cluster—pressure, entropy and temperature profiles—which I could explore and characterize despite its location about 5 billion light years away. It was so cool!”

When Masterson presented a poster on this research at the annual conference of the American Astronomical Society last January, she won the Chambliss Astronomy Achievement Student Award.

A class Masterson took with Professor Chris Mihos first introduced her to the possibilities of observational astronomy. For this class, called Astronomical Techniques, Mihos had his students write proposals to reserve observation time on telescopes, just as real astronomers do. Masterson proposed using the 4-meter telescope at Kitt Peak National Observatory in Tucson, Ariz., to look at the colors of galaxies in the Coma Cluster, an assemblage of more than a thousand galaxies approximately 320 million light years from Earth. The goal of her project was to investigate how a galaxy’s environment affects its ability to form stars.

“I’ve been teaching this class for 15 years, and Megan’s proposal was probably the best one I have ever seen,” Mihos says. “She looked through a lot of literature and decided she wanted to go beyond what everybody had done to date and look at what would be the next definition of the problem. If we had been submitting actual proposals to observatories, I think she would have
had a good chance.”

Once she completes her master’s program at Cambridge, Masterson will go on to Massachusetts Institute of Technology, where she has been admitted to the doctoral program in astrophysics. Ultimately, she hopes to teach and continue exploring worlds beyond our own.

Mihos, for one, can’t wait to see what the future holds for his former student. “We need women scientists in high-visibility roles,” he says. “In 15 or 20 years, I can see Megan not just working in the field but being a leader in it. She has the academic skills as well as the perseverance and drive to do it.”

Joe Sugarman is a freelance writer in Baltimore, Md.