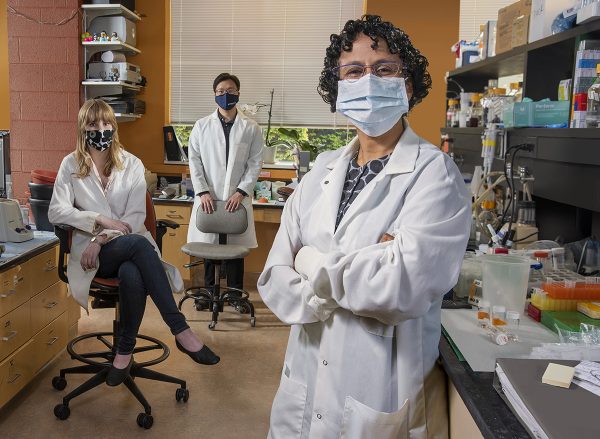 From left: Doctoral student Anna Jussila and fourth-year biology major Brian Zhang are engaged in research with Radhika Atit that could lead to a treatment for fibrosis. Photo by Mike Sands.

Look closely at the natural world, and you’ll see patterns everywhere. There’s the delicate spiral of flower petals sprouting from a bud. The hexagonal layout of a honeycomb. The highly ordered structure of a crystal.

Radhika Atit, professor in the Department of Biology at Case Western Reserve, has long been fascinated by arrangements like these. She’s spent her career studying the development of skin, which contains its own complex pattern of cells—particularly in the dermis, a deep layer of skin that holds hair follicles, sweat glands and connective tissue like collagen, a structural protein central to Atit’s research.

The intricate order that exists within the skin can be easily disrupted, Atit says. Deep cuts, scrapes, burns or other wounds can destroy the patterns of growth. One of collagen’s functions is to fill in such wounds—but in doing so, it edges out space for cells and other structures. It’s a bit like punching a hole in an intricate mosaic, and then slopping concrete into the void: an effective patch, yes, but far from an elegant one.

This isn’t just an aesthetic issue, however. Atit notes that collagen-filled patches can completely alter the biomechanical properties of the skin. “It loses the ability to support blood vessels and nerves, as well as sweat glands and other glands,” she explains. “You can no longer sense pressure, pain or any kind of touch in that area.”  In patients with chronic autoimmune diseases like scleroderma, a much more serious problem can occur: Collagen production can run amok. These patients aren’t wounded by an accident, burn or other external cause. Yet their immune system continually stimulates dermal fibroblasts, the specialized cells that make collagen. As a result, these cells pump out more and more of the protein, causing widespread scarring in the skin. Through a similar process, a life-threatening condition called fibrosis leads to massive scarring of the skin or internal organs, rendering them into stiff, nonfunctioning tissue.

“Even when there’s no physical trauma, the same events that occur in a trauma situation still take place,” Atit says. “What happens in skin can also occur in all internal, soft-tissue organs—after heart attacks, during liver cirrhosis, in the kidneys or the lungs. And in these cases, patients can eventually die from it.”

Since 2009, Atit and her research group have been working to identify factors responsible for these conditions. Now, with a $2.86 million, multi-investigator grant from the National Institutes of Health, they are pursuing studies that may lead to a treatment within the next few years.

From the start, Atit knew that taking on a project of this magnitude would require a novel approach. Fortunately, she was well accustomed to dealing with complex problems. As an undergraduate at Muhlenberg College, a famously interdisciplinary liberal arts school in Allentown, Pennsylvania, she often took classes that were jointly taught by professors from different fields, giving her a range of perspectives on a topic.

“I never learned environmental history from just a historian; I learned it from an ecologist and a historian. For classes in philosophy of religion, I had a philosophy professor and a religion professor in the room. It gave me a powerful way to tackle thorny problems. If you look at them from more than one angle, you usually get deeper insights,” she says.

Left: Representation of some parts of normal adult skin, showing the epidermis (outside layer), dermal fibroblasts and adipocyte layers in the dermis. Right: Upon a fibrotic stimulus, adipocytes lose their lipid content and fibroblasts become activated to make more collagen (blue fibrils). The fibrotic region dramatically changes the architecture and function of the skin.

Atit’s interest in skin biology dates back to her doctoral work at the University of Cincinnati, where she joined the lab of oncology researcher Nancy Ratner to investigate the role that cancer-causing genes can play in skin-wound healing. Later, as a postdoctoral fellow at Memorial Sloan Kettering Cancer Center in New York, she worked with developmental biologist Lee Niswander, researching the genes that control the patterns of feather buds in chick skin. A second postdoctoral fellowship brought Atit to the CWRU School of Medicine. Collaborating with Ronald Conlon, associate professor in the Department of Genetics and Genomic Sciences, she explored the origin of dermal fibroblasts in embryos. In 2005, she joined the biology faculty in the College of Arts and Sciences.

Four years later, however, Atit’s research took a new turn when her father was diagnosed with pulmonary fibrosis. “I started thinking: What is this disease?” she recalls. “Maybe I could use my training as a geneticist to uncover a solution.”

Atit began looking for a genetic pathway—a series of biochemical reactions triggered by a gene—that might lead to diseases like her father’s. She soon homed in on a pathway called Wnt signaling, which she discovered was responsible for creating dermal fibroblasts in mouse embryos. When one of Atit’s doctoral students, Emily Hamburg-Shields (GRS ’15, biology; MED ’16) activated the pathway in the skin of adult mice, the researchers observed the onset of fibrosis.

“Fibroblasts not only made more of themselves, but started going into overdrive to produce excess collagen. The mouse skin became fibrotic within three weeks,” Atit says. “Up until that point, no one had thought of Wnt signaling as something that could trigger fibrosis in adult skin.”

Still, the researchers hadn’t shown that Wnt signaling directly causes the disease. And even if that proved to be the case, treating fibrosis in humans wouldn’t simply be a matter of shutting down the pathway, because doing so would have consequences for the rest of the body. Wnt signaling plays a major role in maintaining hair follicles, Atit explains. More significantly, it keeps the cells of the gut lining healthy, so a Wnt-blocking drug could wipe out an important part of the digestive tract and have other unintended effects.

Atit continued her work on Wnt signaling for five more years, all while watching her father’s disease progress. He died in October 2014—the same month her lab’s manuscript, which demonstrated how activation of the pathway contributes to the accumulation of collagen and similar proteins, was accepted for publication.

Since then, Atit and student researchers and staff, including Nathaniel Mullin (CWR ’16), Miarasa Steele (CWR ’16), Nikhil Mallipeddi (CWR ’17) and Gregg DiNuoscio, have continued exploring the connection between Wnt signaling activation and fibrosis, hoping to find a viable treatment for the disease. Their persistence has paid off. In 2015, the Atit group made an exciting discovery: They identified fat cells (adipocytes) in skin that quickly disappear once the Wnt signaling pathway is turned on, but before the skin becomes visibly fibrotic. 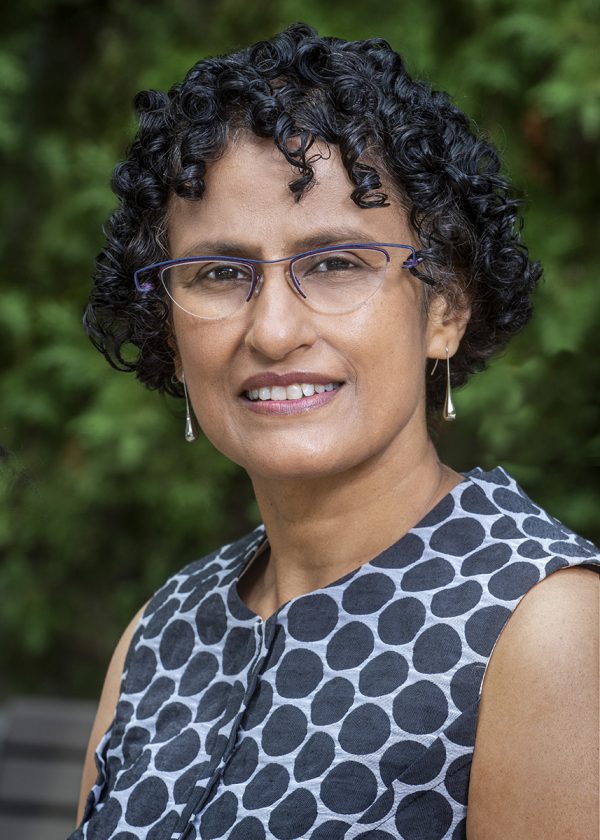 Radhika Atit, a member of the biology faculty since 2005, is a co-recipient of a $2.86 million grant
from the National Institutes of Health. Photo by Mike Sands.

That came as a surprise. Normally, adipocytes act a bit like water balloons: They fill themselves with oily lipids, forming a soft, flexible layer of fat under the skin. But when the Wnt signaling pathway is activated, these cells spit out their lipids and deflate. “We realized this was a precursor to scarring,” says Atit. Recent studies show that when adipocytes spit out lipids en masse, fibroblasts are activated to secrete more collagen. If there was a way to stop fat cells from deflating, she thought, it might be possible to prevent excess collagen production.

Atit immediately began to examine this idea in collaboration with Valerie Horsley, a developmental biologist at the Yale School of Medicine. Like Atit, Horsley studies skin biology and focuses on the role of fat cells in wound healing. “We’re both trying to understand how the fat cells interact with other skin cells during fibrosis. Together, we’re able to make connections that other groups haven’t thought of,” Horsley says. “I love working with Radhika. She has so much energy; she’s positive and fun, while being a very in-depth and thorough scientist.” The NIH grant is now supporting their collaboration.

Meanwhile, two members of the Atit lab, doctoral student Anna Jussila and undergraduate Brian Zhang, a fourth-year biology major, have developed a system to turn the Wnt signaling pathway in mice on and off at will. Jussila found that when she turned on the pathway, fat cells shrank and fibrotic skin developed—a result that confirmed Atit’s previous observations. Then, when she turned it off, the process seemed to miraculously reverse: After three weeks, deflated fat cells in fibrotic areas of the mouse began to reinflate, and scarring decreased.

“You can’t show that a pathway is responsible for a certain disease unless you can turn it on and off,” Atit explains. “With this work, we could not only induce fibrosis in mice, but reverse it as well. It is the first genetic model of its kind in fibrosis research.”

Closer to a Cure

This discovery is bringing Atit and her lab ever closer to a fibrosis cure. Now that they have developed their genetic model of the disease, they can look for genes that mediate, or carry out, fibrotic fat loss activated by the Wnt signaling pathway. A treatment inhibiting these genes would be better tolerated than one inhibiting the pathway itself.  Currently, Jussila and Sakin Kirti—a second-year biology major and a recipient of an undergraduate research scholarship from the Arnold & Mabel Beckman Foundation—are working on candidate genes, starting with ones that can be targeted with drugs already approved by the Food and Drug Administration (FDA) for other purposes. If the research is successful, Atit notes, it could help persuade the FDA to allow off-label use of these drugs, avoiding what could be decades of development and testing to bring a new fibrosis treatment to market.

“It’s very exciting,” Atit says. “For 30 years, people have been focusing on signaling proteins that directly drive collagen production in fibrosis, with no luck. But it turns out that if you approach the disease from a different angle—through fat cells—all these new possibilities for treatment suddenly open up.”

David Levin is a freelance science writer in Boston.