Beyond Living the Dream 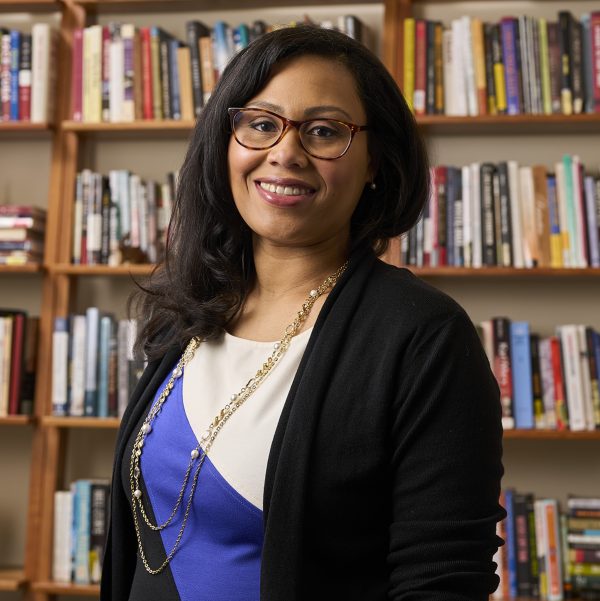 Cassi Pittman Claytor, a member of the sociology faculty since 2014, grew up in East Cleveland, Ohio. Her early life inspired her interest in the “mixture of class experiences and backgrounds” in the Black community. Photo by Roger Mastroianni

Cassi Pittman Claytor is an increasingly influential scholar of contemporary African American life. She did her first sociological research as an undergraduate at the University of Pennsylvania, when she interviewed Black families in West Philadelphia about their educational choices for their children. Later, at Harvard University, she wrote her master’s thesis on the concentration of subprime loans among middle-class Black homeowners. In her first book, which expands on her doctoral dissertation, she examines social and cultural drivers influencing the economic behavior of Black professionals.

Pittman Claytor, the Climo Junior Professor in the Department of Sociology, says her early life inspires her research. She grew up in East Cleveland, Ohio, a majority-Black suburb adjacent to University Circle and Case Western Reserve. When the Pittmans moved to East Cleveland in the 1980s, it had a large Black middle and working class. But over the years, institutions and employers left the city. Depopulation and disinvestment created areas of concentrated poverty, and the local government struggled to provide its citizens with basic services. The subprime mortgage crisis only added to the devastation.

Still, Pittman Claytor notes, East Cleveland has always been socioeconomically diverse, and she points to her own family as an example. Her father, an attorney, was once the city’s mayor; her paternal grandfather was a college graduate. Her mother was a nurse and then worked for the Cuyahoga County Metropolitan Housing Authority. Her maternal grandparents, on the other hand, migrated to Cleveland from a small town in Georgia and never went to high school. Pittman Claytor, the fourth of five children, worked in her grandparents’ restaurant, Sister Raffie’s Seafood, a legendary establishment in the Black community.

“It was just very disheartening,” she says. “Part of it is that there hasn’t been enough focus on sharing the full point of view of the Black experience. Within the Black community, there is a lot of heterogeneity. There’s a mixture of class experiences and backgrounds that oftentimes doesn’t get recognized.”

The broader perspective Pittman Claytor brings to her work is illustrated in her book, Black Privilege: Modern Middle-Class Blacks with Credentials and Cash to Spend (2020). The study is based on interviews she conducted with 54 Black professionals in the New York City area between 2009 and 2014. Pittman Claytor asked her subjects about their experiences and choices as consumers. How were they treated in retail environments? What did they spend their money on, and where did they spend it? She also wanted to know how they navigated their workplaces, including Fortune 500 companies and Wall Street firms, and what connections they maintained to Black institutions and cultural settings. 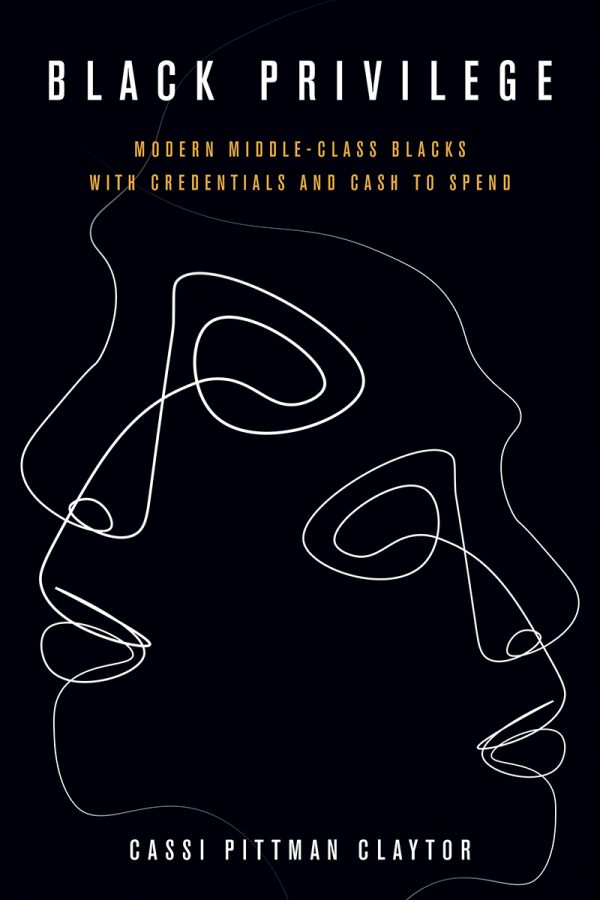 While she was researching and writing her first book, Cassi Pittman Claytor received support from the Woodrow Wilson National Fellowship Foundation, which awarded her a Career Enhancement Fellowship, and Harvard University’s W.E.B. Du Bois Research Institute at the Hutchins Center for African & African American Research, which named her a Sheila Biddle Ford Foundation Fellow.

When she started her project, Pittman Claytor knew that previous observers had criticized middle-class Blacks for their buying habits. E. Franklin Frazier, a pioneering African American sociologist at the University of Chicago, had complained in Black Bourgeoisie (1957) that affluent Blacks in the pre-civil rights era were obsessed with acquiring material possessions, believing that conspicuous consumption would “gain them acceptance in American life.” In his view, this strategy for assimilation was a mistake: It distracted Blacks from the vital work of accumulating real wealth and improving their economic position in society.

Pittman Claytor acknowledges that, for the Black middle class, consumption is one way of “living the dream.” But her research shows there is more to it than that. She finds, for instance, that Blacks with disposable income often devote their resources to racial uplift by patronizing Black-owned businesses. Their commitment to Black advancement influences their consumer behavior and preferences. In addition, shopping at Black enterprises provides a respite from the suspicion and disrespect they encounter in other commercial settings.

“If you are treated discriminatorily, you may avoid a product, a company, a store,” Pittman Claytor says. “And if it’s a product you need, you might pay more elsewhere just so you don’t have to endure racism.”

In addition to supporting Black entrepreneurs, the subjects of Pittman Claytor’s study actively engage with Black civil society institutions—places “where Black genius, history and contributions to society are recognized.” In doing so, they cultivate what she calls “Black cultural capital,” a key concept in her book.

“They purposely participate in organizations that are led by Blacks and serve Blacks—fraternal organizations, sororities, the Urban League,” she explains. “They enjoy spaces where Black culture is celebrated, and they enjoy the freedom that comes with being able to wear their hair however and not be seen as deviant or something negative.”

This freedom, Pittman Claytor suggests, is especially valued by Black professionals who work in majority-white settings. At the office, they adopt certain styles of interaction and master certain social cues in order to blend in and advance their careers. But the same rules don’t apply when they meet Black friends for dinner at a Black-owned restaurant, check out an exhibition at a Black museum, attend a concert at a neo-soul lounge or worship at a Black church.

Pittman Claytor speaks of the “cultural flexibility” that middle-class Blacks display under these circumstances. “They are able to gauge a setting and determine how to act strategically in that setting,” she says. “Is it safe and appropriate for them to draw on their Black culture, their knowledge bases, their sensibilities and their linguistic capacities? Or do they have to play down their Blackness because it may be devalued in white-dominant contexts? That skillset is an asset that enables them to migrate in and out of different types of social contexts. I always like to say, ‘From their black Baptist church on Sunday to their all-white Wall Street firm on Monday.’ They’re able to navigate seamlessly in these environments.”

In spring 2019, while Pittman Claytor was putting the finishing touches on Black Privilege, the popular R&B artist SZA tweeted that she had been racially profiled while shopping at a Sephora store in California. An employee of the beauty retailer suspected the singer of stealing and called security on her.

Pittman Claytor wrote an op-ed about the incident for The Guardian, noting that “Retail racism is nearly endemic to shopping” and that “inclusivity training is unlikely to solve persistent discrimination in our society.” She recommended that, as a first step toward redress, Sephora and other companies ban the practice of following Black customers or calling the police on them “because a salesclerk deems them suspicious.” 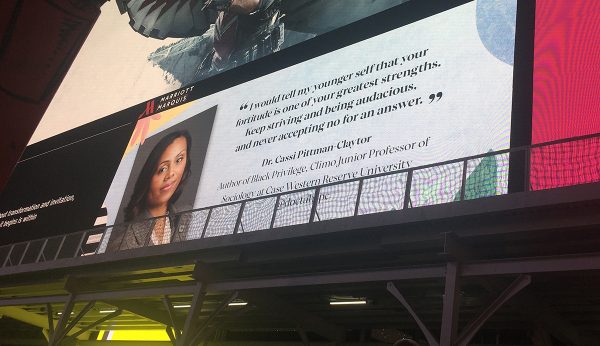 Cassi Pittman Claytor was featured on a Times Square billboard in New York City in March 2021, as part of a Women’s History Month celebration by the beauty retailer Sephora. The company commissioned Pittman Claytor to conduct a study of racial bias in retail settings, and it has implemented new policies based on her research. Photo courtesy of Sephora

She also recommended that companies collect data from Black shoppers about their in-store experiences, including instances of discrimination. She proposed expanding product lines that appeal to Black shoppers, giving premium shelf space to Black-owned brands and offering bonuses or promotions to sales associates who successfully serve diverse customers. Finally, she called on companies to increase racial diversity among their top executives, who have “the power to change company policies and culture.”

“You can’t train bias away,” Pittman Claytor wrote. “But by changing the power and incentive structures within companies and proactively improving Black consumers’ experiences, companies can create real change in quelling retail racism.”

In response to the op-ed, Sephora reached out to Pittman Claytor. Together with collaborator David Crockett, professor of marketing at the University of South Carolina’s Darla Moore School of Business, she agreed to conduct a yearlong research project on racial bias in retail. Their study both assessed the problem and offered ideas for improvement.

For example, the researchers found that the lack of diverse employees contributes to exclusionary treatment of minority shoppers. They learned that people of color feel their in-store interactions are driven by their skin color and ethnicity, but that they rarely voice their concerns about negative shopping experiences to retailers. Perhaps most important, the study revealed that shoppers and retail employees want to see meaningful, long-term action to remedy the situation.

In response, Sephora adopted a wide-ranging set of new policies, including several Pittman Claytor had advocated in her Guardian essay. For example, the company will curtail its use of security officers provided by outside contractors. It will double the assortment of Black-owned brands in its stores and advertise them on its website. It will conduct in-store surveys to collect data on customers’ experience and employee training compliance. It will also create programs to recruit and retain employees of color and support their career advancement.

Pittman Claytor was pleased to see the real-world impact of the study. As an academic sociologist, she never expected to work with a corporation—an entity with “the ability to take action and implement policies.” On the other hand, she says, “These issues have been in the making for 100 years. They’re industry-wide. And there are not going to be quick fixes.”

An outspoken advocate for reform in the retail industry, Pittman Claytor has continued speaking publicly about retail racism and acting as a consultant to corporate leaders and major trade organizations. Magazines such as Fortune and Forbes have cited her research and sought her out for interviews. Last year, Business Insider placed her on its 2020 list of “100 People Transforming Business.” And in March 2021, she was featured on a billboard in New York’s Times Square as part of Sephora’s celebration of Women’s History Month.

Along with a portrait photo, Pittman Claytor provided a quotation for the billboard: “I would tell my younger self that your fortitude is one of your greatest strengths. Keep striving and being audacious and never accepting no for an answer.”