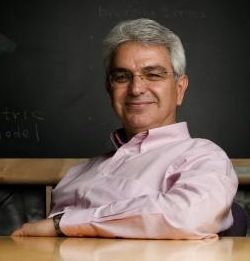 Savas Dimopoulos received his Ph.D. in 1978 from the University of Chicago. He was a postdoctoral Fellow at Columbia University from 1978-79, and has been Assistant, Associate, Full Professor at Stanford University from 1979 to the present. Prof. Dimopoulos has also been an Associate Professor at Harvard University from 1981 to 1983, and a staff member of CERN from 1994-1983. His career honors include winning the J. J. Sakurai Prize of the American Physical Society, “For his creative ideas on dynamical symmetry breaking, supersymmetry, and extra spatial dimensions, which have shaped theoretical research on TeV-scale physics, thereby inspiring a wide range of experiments.” He is the winner of the Tomassoni Prize in Physics, “For his fundamental contributions in the understanding of the mechanism for symmetry breaking and searches for new physics at the TeV scale” and winner of the University of Chicago William H. Zachariasen Lecturer Award for “For his groundbreaking contributions to the theories of supersymmetry, dynamical electroweak breaking, and extra dimensions, which have helped guide the search for physics beyond the Standard Model.” Prof. Dimopoulos is appointed the Hamamoto Family Professorhip at the School of Humanities and Sciences, Stanford University, and has also been elected to the American Academy of Arts and Sciences. He is an Alfred P. Sloan Foundation Fellow, a Fellow of the Japanese Society for the Promotion of Science, and holds the Distinguished Alumnus Award, University of Houston, Texas.