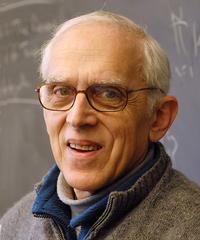 Stephen L. Adler is professor emeritus in the School of Natural Sciences at the Institute for Advanced Study in Princeton, N.J. Prof. Adler received his A. B. from Harvard University in 1961 and his Ph.D. from Princeton University in 1964. In a series of remarkable, difficult calculations, Stephen Adler demonstrated that abstract ideas about the symmetries of fundamental interactions could be made to yield concrete predictions. The successful verification of these predictions was a vital step toward the modern Standard Model of particle physics. In more recent work, he has been exploring generalized forms of quantum mechanics, both from a theoretical and a phenomenological standpoint. He has developed new algorithms for multidimensional integration, and is currently exploring a particle unification model based on boson-fermion balance without full supersymmetry, and a novel proposal for the ”dark energy” that drives the accelerated expansion of the universe. Prof. Adler’s awards and honors include membership in the American Academy of Arts and Sciences, fellowship in the American Association for the Advancement of Science, fellowship in the American Physical Society, the American Physical Society’s J. J. Sakurai Prize (1988), the First Award in the 2016 Gravity Research Foundation Awards for Essays on Gravitation, the Dirac Prize and Medal from the International centre for Theoretical Physics (1998), and membership in the National Academy of Sciences.