Cervical Caps made in the U.S.A. 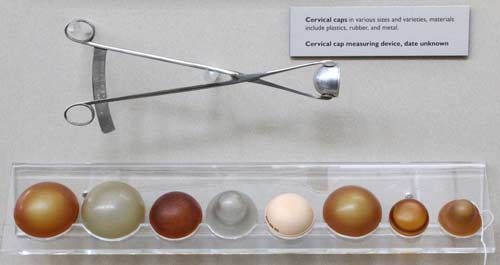 Cervical caps in a variety of materials and shapes.
Above a device for measuring the size of a cap.

Cervical caps were manufactured and sold in the United States from the 1920’s through the 1940’s. Durex Products sold a rubber dome, and the Surgical Instrument Research Laboratory had a line called Cervicaps which contained caps of silver (6 sizes), chrome (12 sizes) and firm amber plastic (9 sizes), and clear and plastic and rubber versions (9 sizes). Ortho Pharmaceuticals and Milex-Western also sold hard plastic caps in the 1940’s. Despite the availability of these products it was the diaphragm which became the preferred physician prescribed method in the United States in the 1940’s through the 1950’s.

While contraceptive devices were readily available in many parts of Europe in the early twentieth century, strict laws, lack of physician involvement, and social mores in the United States meant the devices and literature were scarce. Social reformers Margaret Sanger and Emma Goldman worked hard bring the devices and education on birth control to all women. During a visit to the Dutch clinic of Dr. Johannes Rutgers at The Hague, Sanger saw “over 15 kinds of devices including 14 sizes of the “Mensinga pessary”. It was this visit which convinced Sanger the best method of birth control was a doctor fitted device, either the cervical cap or a diaphragm. Sanger opened North America’s first birth control clinic in New York City in 1916. Sanger and her sister, Ethel Higgins Byrne, did the work themselves, assisted by a receptionist. Sanger claimed to have fitted 488 women with diaphragms in the 10 days before the police shut the down the clinic. Sanger claimed she could not find a doctor willing to work at the clinic.

Margaret Sanger and her second husband, Noah Slee, illegally imported diaphragms from Germany, the Netherlands and later from Japan. In 1925, Slee provided funding to Sanger’s friend Herbert Simonds, who used the funds to found the first diaphragm manufacturing company in the U.S., the Holland-Rantos Company. Sanger’s importation of diaphragms played a role in overturning the federal Comstock Act. In 1932, Sanger arranged for a Japanese manufacturer to mail a package of diaphragms to a New York physician who supported Sanger’s activism. U.S. customs confiscated the package, and Sanger helped file a lawsuit. In 1936, in the court case U.S. vs. One package of Japanese Pessaries, a federal appellate court ruled that the package could be delivered. 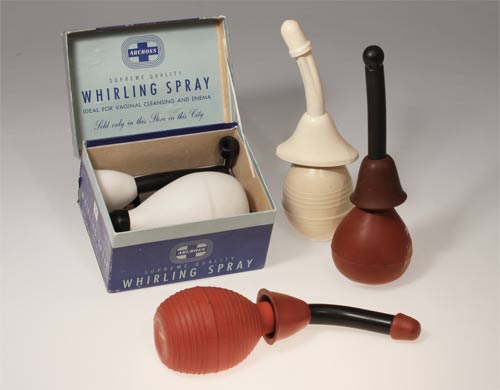 Contraceptives were available for purchase in drug stores and through mail order companies throughout the twentieth century. The economic depression of the 1930’s into early 1940’s motivated people to limit family size. “Feminine hygiene” and “marriage hygiene” were often used as polite euphemisms for over the counter female contraceptives. These terms coined by advertisers in the 1920’s were in use through the 1950’s. Cleanliness was advertised as a virtue, the advertised goal, keeping free of germs also meant keeping free of sperms. These products included vaginal jellies, antiseptic douches, suppositories, foaming tablets, sponges and “one size fits all” diaphragms. These products were generally inexpensive and had the advantage of not requiring a doctor’s visit. Female controlled contraception methods were growing in popularity; by 1938 feminine hygiene products were 85% of total contraceptives sales.