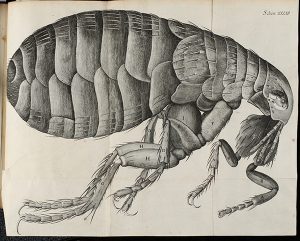 Illustration of a flea from Hook’s Micrographia (1665).

We are in the process of composing a catalogue that will present a selection of works from our rare book collection to showcase a significant sampling of the holdings in the Allen Memorial Medical Library. Today we have some 40,000 rare books, placing our holding among the top ten medical libraries in the country. Yet these books are seldom seen, and for that reason are perhaps under appreciated. Bringing them into the light, so to speak, is the point of this catalogue. It is tentatively entitled How Medicine Became Modern: The Convergence of Science, Technology, and Art in Medicine, as seen in the Rare Book Collection of the Cleveland Medical Library Association.

The genesis of this catalogue stems from a visit to the Allen Memorial Medical Library last Spring by members of the Rowfant Club, a Cleveland bibliophilic society dating to 1892. As it happens, there is a significant crossover between the ranks of the Rowfant membership and trustees of the Cleveland Medical Library Association. Don Kurlander asked me to give a tour of the Allen and provide a glimpse of its rare book collection. I do that several times a year, but this occasion proved different and consequential.

Our whirlwind tour of about fifteen rare books provided the opportunity to reveal the breadth and depth of our rare book collection. It ranged from Vesalius’ 1555 Fabrica (the first book given to the CMLA in 1893 by Howard A. Kelly) to Frederick Becker’s The Anatomical Basis of Medical Practice, a 1971 text featuring sexist pinups that led to its abrupt demise. Between these bookends we admired Fuchs’ New Kreüterbůch (1543), Agricola’s De re metallica (1556), Hooke’s Micrographia (1665), Hunter’s Gravid uterus (1774), and several more eye-popping medical classics. Carl Weitman, a devoted bibliophile, longtime Rowfanter, and CMLA trustee, expressed astonishment at what he beheld. Carl knew, better than most, how unusual it was to see such a rich array of rare medical books. And despite having served on the CMLA board for some time, he really hadn’t fathomed the strength of this Cleveland gem. After the tour, Carl took me aside and said that he would like to see the rare books in the Allen become better known and appreciated. Yes, we have had a web presence since the late 1980s, but that hasn’t always reached admirers of rare books. A printed catalog was in order, he insisted, and so this project began. 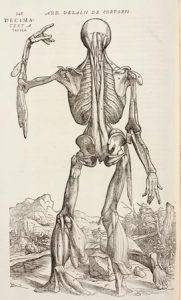 Every great collection of rare medical books has its own arc and trajectory, reflecting the interests of the individuals and organizations that built them through purchase and gifts. The CMLA’s collection originally grew out of founders’ veneration of the medical past. Consequently, most of the great works of medicine are to be found in the Allen Medical Library. In working with this collection, I have been frequently prompted to go looking for items requested by library patrons or for my own research. With few exceptions, I usually found the original source in our rare book collection. It’s definitely a working collection, not some rare book boutique with just a few precious gems.

What sets us apart? First, we have particular strengths derived from the collecting interests of Cleveland practitioners including notably Jared Potter Kirtland, Henry Handerson, Dudley P. Allen, William Corlett, Otto Glasser, Edward Harvey Cushing, and Robert Stecher, and several more. Recently, we received donations of rare books by Edward Bloch, Percy Skuy, and Irving Kushner. Second, our rare book collection has benefited from a symbiotic relationship with medico-historical activities pursued under the umbrella of the Cleveland Medical Library Association. Some CMLA members were bona fide historians, most notably Handerson writing on medieval medicine, Glasser composing the authoritative biography of Roentgen, and Charles Hudson drafting a biography of Dudley Peter Allen. Howard Dittrick, of course, wrote extensively about the history of medicine in the Western Reserve. Third, from 1943 to 1960, the museum’s main gallery became home to the rare books of The Library of the Surgeon General’s Office (today the NLM), a measure to protect the nation’s most important rare medical book collection during time of war. In that period anyone doing serious research in medical history came here during those years. It brought Genevieve Miller, a research assistant to Henry Sigerist, to Cleveland and she became the first history PhD to lead the Dittrick in the 1960s.

Our recent development of an interactive digital exhibition, also entitled How Medicine Became Modern, has precipitated extensive use of our rare books for imagery and narrative content. In the process, we have gained a much firmer grasp upon which volumes shed light on the interactions of science, art, and technology in medicine. At those converging intersections we find intriguing cross pollination of disciplines, which to some might have seemed to inhabit parallel but separate worlds. Sharing these insights is at the very heart of this venture. To that end, we will be working with a CMLS subcommittee led by Carl Weitman to move this project forward. Stay tuned for more updates!