For our recent “exhibit in process,” At the Dittrick, we’re exploring…disposables, Dittrick Chief Curator Amanda Mahoney had a difficult time narrowing down artifacts to include in the display. We’ve asked her to share a behind-the-scenes peek at the exhibit process and discuss why some really interesting objects were ultimately excluded from the exhibit. You can view the virtual version of the completed exhibit HERE. Read on to learn more about the artifacts that didn’t make the final cut!

We’ve been experimenting with informal “mini exhibits” at the Dittrick as a way to put more of our collections on public view and share new research in progress with our visitors. These displays are less polished than other Dittrick exhibits and use exhibit cases and object mounts that we have on hand–a low-cost approach that allows our team to install a new concept every few months. We stick to a strict word count and basic layout for every iteration of these mini-exhibits to further simplify the process. Our new exhibit, “At the Dittrick, we’re exploring…disposables!” was particularly challenging to curate, as the history of disposable materials in healthcare is one of my areas of research. Plus, the Dittrick has incredible examples of disposable healthcare items that have never been exhibited. Many museum curators, myself included, would prefer to include every bit of their research into each label and squeeze as many artifacts as possible into every case. Unfortunately, this approach doesn’t lead to very user-friendly museum exhibits! Choosing which artifacts to include and what information to focus on for an exhibit is an iterative process shaped by what we think our visitors might find interesting, what topics we’re currently researching, and practical constraints. Here are some of my favorite Dittrick artifacts that were edited out of the “disposables” mini-exhibit during the development process. 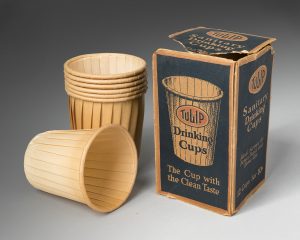 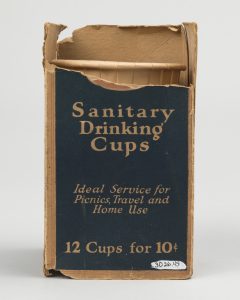 Paper is a very important disposable material whose importance in the history of hospital care is often overlooked in favor of plastic, so I really wanted to include paper artifacts in this exhibit. While paper items continue to be widely used in healthcare, hospitals relied upon a wide range of inexpensive, lightweight, and burnable paper products until at least the 1950s. Disposable historic objects are usually rare, not only because they were typically thrown away but also because they were usually made with cheap, non-durable materials. Paper is particularly difficult to preserve as it is sensitive to moisture, heat, UV light, tearing, or other structural damage. Note the yellowing of the paper cups and the tears and flaking on the box in the photo (1980.026.045). For paper cups that probably date between 1930 and 1950, they are in pretty good shape! You can get a better sense of just how brittle the paperboard box has become in the second view (where you can also see that the accession number on the bottom right of the box is incorrect). After considering this particularly fragile paper artifact for the “disposables” exhibit, the Dittrick team came to a consensus that the level of UV light in the space requires us to exclude rare books and paper artifacts in general from displays in this space. Fortunately, we have beautiful photographs to share of cups, courtesy of the Dittrick photographer. 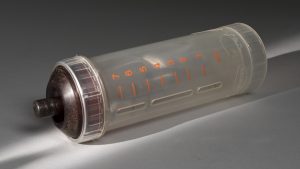 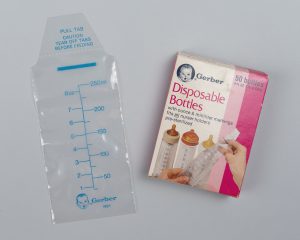 The exhibit case is small with a tilted interior surface and low headroom. This creates some spatial and mechanical limitations that sometimes require a shift in exhibit theme. For example, I wanted to introduce the idea of different levels or types of disposability–some things are semi-disposable, thrown away only after multiple uses like a toothbrush, while others are intended as single-use disposables such as alcohol swabs. I selected this infant feeding bottle one and its associated liners as an example of both a semi-disposable and single-use disposable technology.

Thematically, this bottle was a perfect fit. However, it was too tall to stand upright in the exhibit case! As you may have predicted, when placed on its side as in the picture, the bottle would have rolled down the case’s incline without an object mount to keep it in place. I also didn’t want to exhibit the bottle and plastic liners without the box, which visually explains the purpose and function of both objects. Creating a mount and a facsimile of the box would have taken this exhibit over budget, thus the bottle, liners, and semi vs. single-use disposables theme will be saved for another exhibit. 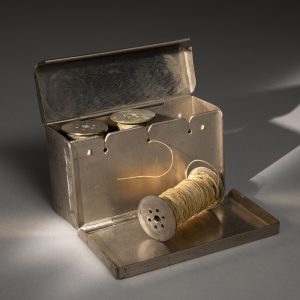 Finally, the real heartbreaker. Look at this gorgeous and super cool ligature sterilizer, complete with ligature! It was the first time I’d ever seen or handled this particular type of sterilizer and I was very excited to examine it for the exhibit. I did not realize that the front flap opened or that the design included slots for drawing out ligature from the sterilized spools–just like a modern dental floss dispenser! My intention was for this object to illustrate how cleaning, sterilizing, and repairing equipment was the norm for most implements used in healthcare well into the 20th century (plus, in my professional opinion, it’s super cute!). It wasn’t until I started drafting the label copy that I noticed every other artifact in the exhibit was related to intravenous injection or venipuncture, making the ligature sterilizer an odd duck. Reluctantly, I set it aside and found another approach to discussing the long history of durable, reusable healthcare equipment within the exhibit.

While the artifacts featured in this post didn’t get the rose this time around they did play an important role in shaping the final exhibit. Keep an eye out for them in future exhibits on disposable materials and other themes! We look forward to welcoming in-person visitors at the Dittrick once again on October 22nd (check here for up-to-date information on our hours of operation). In the meantime, check out the online edition of At the Dittrick, we’re exploring…disposables! and follow us on Instagram and Twitter!