There are seventeen photographs in this collection, taken between 1909 and 1919. Some of the photographs depict various dental clinics located in schools and other places and all relate to dental care campaigns and experiments to help people, especially those of the working classes, to achieve better dental health.

In the past most people called upon the dentist only when toothache and gum problems became too uncomfortable to endure any longer. Dentists contended that routine examination and professional teeth cleaning would prevent minor complaints from becoming serious health problems. Convincing the general public that such preventive measure would indeed be effective was not easy. People needed dramatic proof and continued reminders. In Cleveland, the “Marion School Experiment” provided the necessary proof. Subsequent efforts by the Mouth Hygiene Association and the Cleveland Dental Society kept preventative dentistry in the public eye, reminding people that it was preferable to the suffering the followed neglect of one’s teeth.

At the turn of the century the Cleveland Dental Society started a program to offer ” free dental service for needy children.” Many children of the industrial working class were underfed, knew nothing about proper dental hygiene, and their families could not afford professional dental care. Cleveland dentists insisted that having good or bad teeth was not just a matter of cosmetics or appearance. Poor teeth also harmed the general health of children and these deficiencies would persist in adult life. 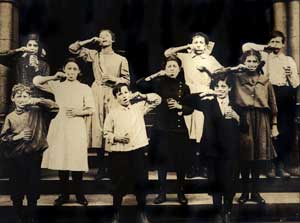 Public spirited dentists, led by Henry Lovejoy Ambler and William George Ebersole, proclaimed war on poor dental health. To plan an effective program that would help all children in the city, a committee from the Cleveland Dental Society met with Harris R. Cooley, Director of Charities for Cleveland, in 1906. With Cooley’s support the Cleveland Board of Education agreed to furnish space for six dental clinics at schools and libraries throughout the city. By 1909 manufacturers of dental equipment loaned chairs and instruments, while the Cleveland Dental Society provided the necessary professional staff. Photo above left: : Marion School, toothbrush drill, 1910.

Public welfare was not the only goal of the dental hygiene campaign. The program also gave dentists the opportunity to prove “scientifically” that their efforts were vitally important to the overall well being of the children’s health. With this purpose in mind, Dr. William G. Ebersole conducted the “Marion School Experiment” in 1910.

In May 1910 Ebersole selected for study and observation a group of 40 children in grades four through seven at the Marion School. Then for a period of six months these children underwent dental examination and received training in proper methods of chewing their food and brushing their teeth daily. Necessary dental care, from fillings to oral surgery, was provided without charge. A staff psychologist monitored intellectual and emotional development that accompanied dental care for the children. To encourage cooperation for the duration of the six-month “experiment” Ebersole offered the students a $ 5 gold piece upon completion in December 1910.

The results of the “Marion School Experiment” confirmed, in general, Cleveland dentists claims that proper mouth hygiene contributed substantially to better overall health among school age children. The scientific results of the test program proved somewhat less clear cut, however. Skeptics argued that lack of a control group made it impossible to gauge the real effectiveness of the experiment. Critics and supporters agreed that the school children blossomed, in part, because someone had paid special attention to them, and not simply because they received dental care. Final reports showed that whatever the cause, the school children enjoyed significantly better health and had improved scholastically as well. 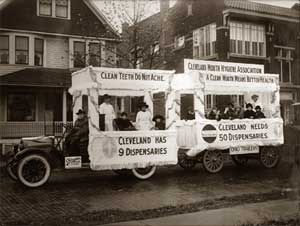 To broaden the impact of their efforts the Cleveland Dental Society inaugurated the Mouth Hygiene Campaign at the Grays Armory in May 1910. For the next six years the clinics operated by the campaign faced constant financial worries and an uncertain future. These concerns ended in 1916 when the Board of Education took over the school clinics, while the Mouth Hygiene Association came under the sponsorship of the Cleveland Federation for Charity and Philanthropy and maintained clinics at three city health centers or dispensaries.
Cleveland Mouth Hygiene Association float in the
Photo right: Community Fund Parade, Nov. 23, 1919.

Prevention became the chief emphasis of the dental hygiene program in Cleveland city schools. Since the Board of Education was not authorized to administer charity to the poor, it restricted its efforts to dental examinations beginning in 1924. Thereafter the school clinics served to examine and clean the teeth of six year old children and referred them to private dentists and municipal clinics for care of dental problems. The period of charity care in the schools had come to an end.

The basic equipment of the modern dental offices was introduced between 1900 and 1920. In these two decades dentists adopted the dental unit (drill, light, spittoon, power supply), chair, and dental instrument cabinet that were the direct forerunners of today’s equipment. Between 1920 and 1960 the dentist’s office furnishings remained essentially the same, despite changes of décor that simply reflected shifts in popular taste.

To raise badly needed money for its educational campaign, the Mouth Hygiene Association produced a dental cream called MOGENE in 1914. A portion of the revenue from the sale of “the finest dental cream that chemical, medical and dental science has produced,” was applied to oral hygiene work in the community where the cream was sold. The cream was packaged with a five page instruction booklet, excerpts of which are shown here. 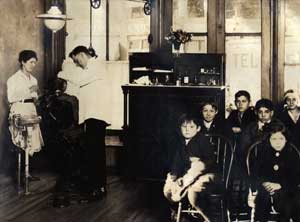 A dental examination in 1910 involved careful probing with instruments and visual scrutiny of the patient’s teeth. X-ray examination, so commonplace today, did not become routine until after 1920. Following the initial examination, the dentist or dental assistant scraped teeth with a scalar, used floss to clear spaces between teeth, and finished cleaning with and abrasive polish.

Painless dentistry became a reality in the first decade of the twentieth century. The principal advances that made this possible included electric motors to power high speed drills and new local anesthetics, particularly Novocain.

Before 1900 almost all dentists used dental drills driven by a foot treadle, much like early sewing machines. Electric motors first became available in the 1870s but were not used extensively in dentistry before 1900. At that time several manufacturers offered compact, high speed electric motors to power dental drills. Increased speed and continuous operation enabled dentists to work more quickly and smoothly, with less discomfort for the patient. This basic form of dental hygiene remained popular until the late 1950s, when the drills were replaced by air-driven turbine drills.

RETURN to the Photography Collection