The Dittrick Museum has a number of prints pertaining to medicine’s history, ranging from the dramatic to the comic. Below we provide a sampling, along with details about the print and its creator. 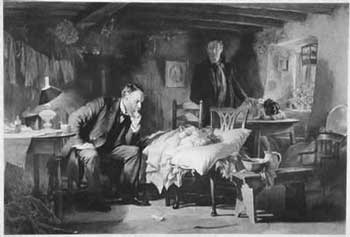 Sir Luke Fildes’s popular masterpiece, The Doctor was commissioned by Henry Tate in 1887, since then the image has been used in many different forms. The United States and Britain put it on postage stamps, political cartoonists lampooned it, and the American Medical Association used it in a campaign against socialized medicine. The Dittrick has a print of an engraving, published in 1893 by Thomas Agnew & Sons, and printed in London. There are different stories about the origins of the painting. The most likely is that Tate gave Fildes the freedom to choose the subject matter himself. Fildes eldest son, Phillip died Christmas morning, 1877. He was attended by Dr. Murray, who impressed Fildes greatly with his care and attention to his dying child. The painting has a happier ending than real life did, as the child has survived through the night and dawn is breaking. Fildes chose his subject matter immediately, although the painting was not begun for four years, and then only with urging from Tate. Another version has Queen Victoria ordering the painting to commemorate the service of her own physician, Sir James Clark who she was said to have sent to care for a servant’s sick child. Fildes went to great lengths to achieve realism in this painting, by constructing the cottage scene in his studio in London, and painting at dawn to catch the unique character of dawn light. Fildes is well known in the context of the social realist movement depicting the plight of the poor, his painting Applicants for Admission to the Casual Ward was so popular police had to keep back the large crowds of onlookers. Fildes was also a talented illustrator whose work appeared in magazines and books, most notably Charles Dickens’s last book Edwin Drood. Fildes like most painters of his era made most of his income from painting portraits for wealthy clientele, but he made the most impact with social pictures. 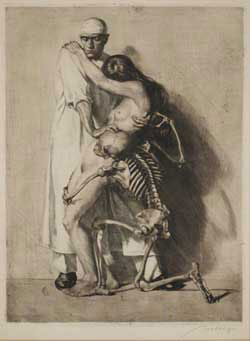 Ivo Saliger’s Der Arzt is an emotionally powerful, allegoric depiction of the physician’s epic struggle to save human life. Der Arzt features a surgeon fending off death, which has in it’s grasp a patient. A real life drama involving the artist’s sister, provided the inspiration for this work. The tale told in a letter from Saliger to a student at Case Western Reserve University. The student, Mrs.Killpack, had written to Saliger asking him about the motivation that lay behind Der Arzt. His response is now in the Archives at the Dittrick Medical History Center, reads as follows:

Many thanks for your friendly letter. Please excuse me, that I took so long to answer, but the pre-Christmas period brings a lot of work. Since you were so friendly as to write in the German language, allow me to do this also, because I noticed that you have a perfect command of German; my English, while suitable for conversation, is deficient when it comes to technical terms.

Now to your inquiry: It would have been better, if you had been able to learn how long this picture has been hanging in your institute, if the picture (without the margin) has a size of 52cm x 69cm, if it has an original signature and if it bears a copyright mark on the bottom left. If all this is so, then is it an original copy from the original plate, that I made myself. It is consequently not a machine-print, but rather a hand-print, made in the manner of D&uuml;rer, long ago. Perhaps I have unnecessarily told you something that you already knew yourself&hellip;. I do not know how many of these copies are distributed around the world; because this picture is dedicated to physicians world-wide, I renounced any limit.

Now to the spirit and the meaning of this picture. It developed out of my mourning. I had a sister. At the close at 1918, as World War I was ending, she got sick. That is to say, the illness, which was perhaps already there, broke out – Lymphogranalomatosis. Several physicians of great stature made an effort to stem her suffering, but we knew it was hopeless. She was 22 years old at this time. I brought my sister to Switzerland, because of the quality of care there. A famous surgeon, the leader of the Zuricher Cantonshospital, endeavored to help my sister. I had known him in Vienna and I was living in his home in Zurich at this time, as a houseguest. Apart from the case of my sister, as a guest, I often listened to my host and his wife discuss other cases at the hospital. There they endeavored to help patients with a succession of diagnostic tests, to delay the inevitable end.

Now an inspiration came to me. I went to my comfortable guestroom and made the first full-size preliminary sketch for the picture. A female figure, barely alive, clinging to the physician, who is attempting to fend off Death, who in turn threatening the patient’s life. Perhaps intuitively, I portrayed the face of the physician with a skepticism, an uncertainty, whether the fight will end well or not. Well, to conclude – the physician’s eternal fight with Death, is to save human lives. My sister died in April 1920. Cause: Leukemia. At the end of June 1920, after 2 months work, my etching stood complete. This is the real story behind this etching.

I am sorry my handwriting is so small, but I feared that I would not have enough paper.

I hope, I have served you with my explanation and wish you the best regards yours,

Later in his career, and ultimately damaging to his reputation, Ivo Saliger became a favorite artist of the National Socialist Party. Several of his paintings were featured in the annual exhibitions held from 1937-1944 at Haus der Deutschen Kunst (House of German Art), which was a national forum for art that conformed to Hitler’s beliefs. These are classically inspired figurative paintings, which were supposed to reflect the Nazi ideal of a pure feminine beauty, devoid of sensuality. 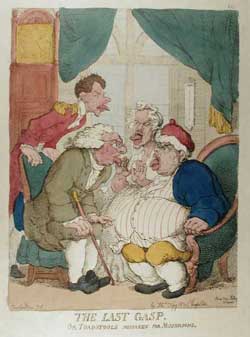 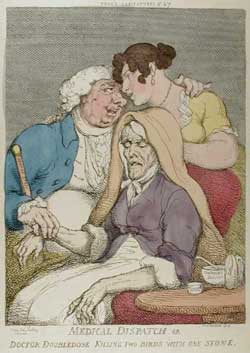 A distinctive style of satire used in caricature drawings emerged in England during the reign of George III. The freedom from censorship and the variety of publishers catering to people of different political and cultural views fueled this art. These etchings reproduced as single prints had the advantage of quick production and a price many could afford. The subject matter was often political in nature but many other subjects were addressed. Rowlandson’s works addressed many subjects: fashion, theater, country life, religion, nautical themes, travel, and medicine and illness. The Dittrick Medical History Center has eight original prints of Rowlandson’s caricature works, and a set of reproductions depicting medical themes. Doctors are usually portrayed as quacks, drunken sots, body snatchers, and money grubbers.

Rowlandson worked for many publishers throughout the years. He was employed at Rudolf Akermann’s ‘Repository of Arts’ in 1798. Akermann sold designs for coaches, paintings, drawings, and materials for amatur artists, most of his clientele were well-heeled middle class. Ackermann was also a Loyalist. Rowlandson’s work for him reflected those political and cultural values. During this same period Rowlandson was commissioned by Thomas Tegg to produce works to be sold at Tegg’s ‘Apollo Library’ that catered to the lower sector of the booming caricature business. Colored etchings sold for one shilling, half the usual price. These works were often bawdy in nature and carelessly executed. Rowlandson also did work for Samuel Fores who was one of the top three dealers of high quality caricatures, the following prints are from a set of prints titled the Comforts of Bath (1798) published by Samuel Fores. 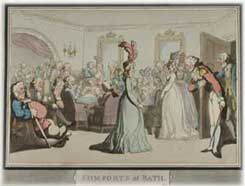 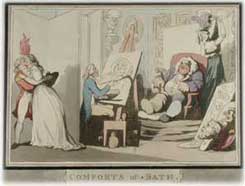 Rowlandson often produced works for opposing points of view at the same time, like the pro-Pitt and pro-Fox etchings, or the Kings first attack of insanity. Collectors of etchings often bought from opposing viewpoints. So when we see doctors depicted very negatively in Rowlandsons prints, this may or may not have been his personal point of view. The medical profession was poorly regulated at this time, permitting quacks to erode public confidence in the profession. Rowlandson died in 1827, and by that time reform of the profession of medicine had begun. The old Poorhouse was being replaced by the newer type of teaching hospital, and modern ideas of public health were evolving. Caricaturists of the day raised the consciousness of the public, and perhaps helped fuel reform in many areas of society.