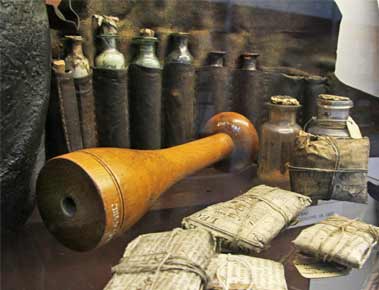 Two hundred years ago, doctors in Ohio faced long miles on horseback as they made the rounds visiting patients. The medical practice of Peter Allen (1787-1864), for instance, was spread over 12 townships in northeastern Ohio and western Pennsylvania. On these trips Allen brought essential medications, carried in the saddlebags seen here. Some years ago, Howard Dittrick examined Allen’s saddlebags and found in them a virtual time capsule of early nineteenth century medicine. Dittrick took the bags to the School of Pharmacy of Western Reserve University for analysis and then recounted his findings:

The first pair [of saddlebags] belonged to Dr. Peter Allen, who came to Kinsman in 1808. Within the bags are many original labeled packets of drugs and two leather cases of bottles, one for liquids, the second for powders. The square folded packets of herbs are carefully wrapped in two papers, inner and outer, each tied with rough homespun linen thread. The contents are mainly crude drugs in distinction to the processed drugs of later era. Each packet contains the amount necessary for one decoction, and the dried herbs have preserved well their characteristic form and taste. The liquid content of bottles has completely vanished with time, but the bottles themselves are of interest, hand-blown, thin and light, with slender necks and wide flanges. They are contained in leather rolls tied with thongs.

We gain an insight, too, into the ailments he was prepared to meet and for which he carried these precious drugs. Among the packets there were senna, rhubarb, and calomel for laxative, while for diarrhoea there was bismuth subnitrate and mercury with chalk. Quinine was ready for malaria and other fevers. Serpentaria, iron pyrophosphate, iron and ammonium citrate were used as tonics and blood purifiers, and valerian as a nerve vitalizer. A distinctive bottle, unmarked and with well-worn cork, contained morphine, suggesting frequent use in the days of no anesthetics. Digitalis leaves, well preserved tells us that bad hearts were present even then. In one package was a mixture of senega, Irish moss and sarsaparilla to which he may have added from the packet of squills or from the morphine bottle to provide a cough remedy. For the child with worms, there was pumpkin seed, and as vehicles he carried Irish moss and the compound tincture of cardamom. These drugs appear quite potent today, and reflect care and precision in handling..
~ Howard Dittrick, 1939 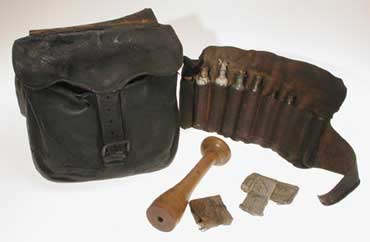 These saddlebags bear another distinction: they were among the very first medical artifacts acquired by Dudley Peter Allen. As a young man, Allen became intrigued with the experience of his professional forebears and began to gather information on “pioneer medicine” in the Western Reserve of Ohio. In doing so, he collected manuscripts, books, and old instruments that once belonged to early practitioners, including his grandfather, Peter. Allen donated these objects to the Cleveland Medical Library Association’s Historical Committee, established in 1898. Over time, this became the Dittrick Museum of Medical History.