Condoms flourished only after 1500 in response to the spread of syphilis throughout Europe and the Americas. Because of this, people often associated the condom with venereal disease and prostitution. Early condoms were fashioned of linen, sheep gut, or fish bladder, and used with ointments and medicinal solutions.

In early 19th century America, condoms remained linked to the “sporting life” to prevent venereal disease. Coded names for condoms included baudruches, French letters, safes, armour, and machines. The French referred to condoms as redingotes Anglaises (English riding coats) and capotes Anglaises (English capes). Condoms could be purchased from barbers, madames at brothels, itinerant peddlers, and tavern keepers. Before 1840 they were too expensive — costing a dollar when a week’s pay was only $14 — to become widely used for either disease protection or contraception.

A revolution in rubber processing changed everything in condom manufacture. Inventors tried to make waterproof fabric with gutta percha and India rubber, but the material changed with shifts in temperature: soft and pliant when warm, but stiff and brittle when cold, and smelly and messy when hot. In 1837 Charles Goodyear found that rubber became stable yet elastic when treated with sulfur and high heat. By the mid 1850s Goodyear and others produced a whole range of rubber goods, including condoms and diaphragms. Prices for rubber items fell and their use soared. “Rubber” became a common, everyday name for the condom. Manufacturers also made hard rubber goods, including vaginal syringes and pessaries.

In the mid 19th century, as now, people used veiled language to talk about sex, reproduction, and birth control. Moral and religious reformers had a hard time critiquing these issues, since it meant speaking about unmentionable things. In ads, writers used coded language – euphemisms and double-entendres. Pills and tonics, for example, induced “a stoppage of nature, or monthly obstruction,” or relieved “irregularities,” for “ladies in a certain situation.” Ads warned readers that “Married ladies, who have reason to believe themselves in the family way, should not use them, as, by their action on the womb, miscarriage would be the consequence.”

“Female medicines” functioned as emmenagogues, or drugs used to induce or hasten menstrual flow, provoking a miscarriage. Some came in the form of pills, while others came as loose herbs to be prepared like tea steeped in water or dissolved in alcohol and flavored with wintergreen or spearmint. Few listed ingredients, but may have contained one or more of the following: pennyroyal (and other mints), rue, hellebore, mistletoe, savin, foxglove, Queen Anne’s lace, aloes, bloodroot, ergot, or aconitum.

Douching as a means of birth control, as well as for hygienic reasons, increased after 1830. Perhaps because women, rather than men, practiced this method, it became one of the most widely used forms of contraception. Early syringes consisted of horn or bone, and pewter, but after 1850 hard rubber syringes predominated. A wide range of devices for douching could be purchased from local pharmacies or by mail.
Maurice Éguisier (1813-1851) a French obstetrician, introduced a self-acting irrigator in 1843. Based upon a design patented by François Libault, a Paris instrument maker, this device nevertheless became known at the “Éguisier irrigator.” It remained in production for the next seventy-five years, and proved popular owing to its automatic operation. One filled the reservoir, wound up the spring drive, and then released it to activate the plunger, thereby pumping fluid out the irrigator’s nozzle. 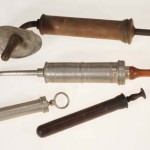 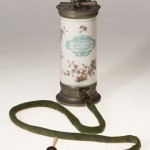 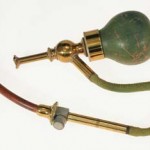 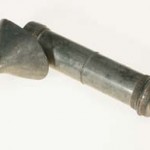