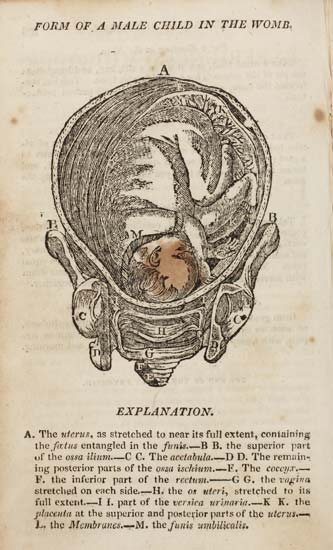 How did people learn about reproduction and birth control in early America? Traditional folk knowledge predominated, shared chiefly among women, passed by word of mouth. By 1700 a new source supplemented this oral tradition: a curious little book entitled Aristotle’s Masterpiece, Displaying the Secrets of Nature in the Generation of Man. First published in English in 1684, copies of the book went on sale in Boston the following year. Aristotle’s Masterpiece became the most widely circulated guide to childbirth and sexual matters before 1830. It said little on the subject of birth control, but presented knowledge of the body and childbirth. Aristotle did not write this book, but the author thought using the name of the Greek philosopher would lend the work authority and prestige.

Aristotle’s Masterpiece mixed classical medical writings, 17th century midwifery treatises, and popular folklore. It described sexual anatomy and the essentials of reproduction, as then understood, without the stigma of guilt, sin, or shame. Informative and not intended to be lewd, Aristotle’s Masterpiece celebrated God’s gift of procreative power and the bliss of the matrimonial bedchamber. The tone of the writing at times waxed reverent; at others it bordered on the bawdy side. But throughout it conveyed a sense of discovery and wonder. Since Aristotle’s Masterpiece presented a subject (sex) rarely discussed in polite society, it remained a source seldom openly acknowledged. Medical men did not credit it as a legitimate body of knowledge, while common folk hid their well-thumbed copies under the mattress. Nevertheless, Aristotle’s Masterpiece became a clandestine classic. Some 27 editions appeared in North America: 11 in the 18th century, and 16 between 1801 and 1831. It cost one dollar or less, and varied from 150 to 300 pages long.

Aristotle’s Masterpiece spread knowledge about generation and childbirth in ways never anticipated by its authors. For women, it codified traditional knowledge about the body, particularly for midwives and matrons called upon for expertise in all things feminine. “Aristotle’s Problems,” a question-and-answer portion of the book, could be read aloud in lesson fashion by schoolgirls to better understand their bodies and the prospects of childbearing. For boys (and men), the book revealed “mysteries” and “secrets” of sexuality. Emboldened by such revelations, some could not resist teasing girls with their newfound knowledge about the body. Aristotle’s Masterpiece thus took on a life of its own. While most often read in secret, it remained the most widely read book on reproduction until the mid 20th century.

Neo-Malthusian advocates of population control by contraception included several leading social reformers. One of whom was Robert Dale Owen 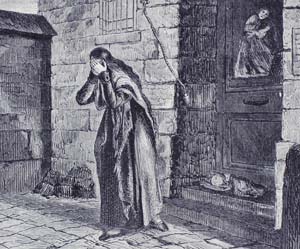 Frontispiece of Moral Physiology, 1875
A desperate mother leaves her child
at a foundling Hospital

(1801-71), a Scottish social reformer, authored a landmark work on contraception, Moral Physiology, or, A brief and plain treatise on the population question, in 1831. Owen accompanied his father to the United States in 1825 to establish a utopian community in New Harmony, Indiana. The community failed but Owen remained in America and dedicated his life to social reform through education. He later served in the House of Representatives where he drafted the bill for the founding of the Smithsonian Institution.

n Moral Physiology Owen addressed contraception on philosophical, moral, political, and economic grounds. To him, it was essential to attain family sustainability. By limiting family size, parents could provide for their children more responsibly, caring for them when young and educating them in adolescence. Owen advised withdrawal to avoid impregnation. He observed that the French practiced withdrawal and their success “positively proves that man may have a perfect control over this instinct.” Owen also asserted that sex without fear of pregnancy would not endanger chastity, but instead cemented marriage bonds of fidelity. Later editions of Moral Physiology did not place such complete faith in the efficacy of withdrawal, and instead included discussion of vaginal douching, especially with spermicides, and the use of condoms.

Charles Knowlton and Fruits of Philosophy

In 1832 Charles Knowlton, a Massachusetts doctor, published Fruits of Philosophy, or the Private Companion of Young Married People. As the first genuinely American book on contraception grounded on medical science, it created quite a stir. Inspired by Owen’s Moral Philosophy, Knowlton strived to bring a scientific understanding of sexual relations to a broad lay audience. Knowlton described male and female anatomy in clear medical terms, in a frank, open manner. He believed that sexuality needed to be understood physiologically, as “gratifying the reproductive instinct” in a healthy way.
To prevent pregnancy Knowlton recommended douching with astringents and spermicides as a “check”. The goal: to help families attain a better quality of life by limiting the number of children. Not everyone welcomed Knowlton’s initiative. Three Massachusetts lawsuits charged that writing about contraception was obscene. The first case levied a hefty fine, the second brought three months hard labor, and the last ended in acquittal. No more prosecutions plagued Knowlton after 1833. Fruits of Philosophy went through at least eight editions and thousands of copies circulated across America before the Civil War. William A. Alcott, a leading moralist and author of health advice books, said in 1856 that Knowlton’s book “had a wide circulation. I have found it in nearly every part of our wide-spread country.” 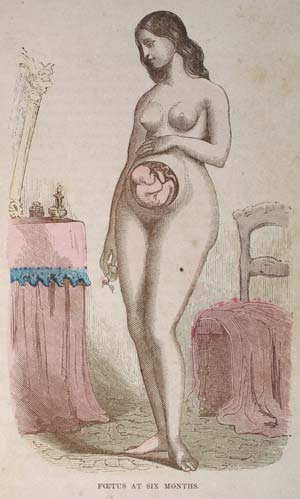 Illustration from the Book of Nature, 1861 edition

James Ashton’s The Book of Nature

First published in 1859, The Book of Nature; Containing Information for Young People who are Thinking of Getting Married,… offered succinct, matter-of-fact information about conception, gestation, and birth, as well as methods to prevent conception. It featured several hand colored plates copied from “anatomical figures in wax in the New York Anatomical Museum.” To prevent conception, Ashton counseled withdrawal, douching, the sponge, or the condom, which he thought it was slow in catching on since it diminished “the enjoyment of the nuptual act.” He also understood more clearly than most contemporaries the fertile/sterile periods of a woman’s monthly cycle. Intriguingly, The Book of Nature was translated and published in Japan in 1875.

Frederick Hollick and the “physiology of life.”

In the 1840s and 1850s Frederick Hollick became the leading and perhaps most daring advocate of “physiological reform” in America. His first book, The Origin of Life (1845) effectively displaced Aristotle’s Masterpiece as a chief source of knowledge about human sexuality and reproduction. Hollick also hit the lecture circuit, teaching anatomy and physiology to hundreds in lyceum halls from Boston to Washington, and by boat to towns along the Ohio and Mississippi Rivers. He argued that his books and lectures empowered people by arming them with a new understanding of human sexual physiology, and that elitist doctors tried to suppress his work. Indeed, like Knowlton, Hollick was sued on obscenity charges in Philadelphia in 1846. But he persevered and his books brought knowledge on sexuality, reproduction, and contraception to thousands of American households. The Origin of Life remained in print through 1920.