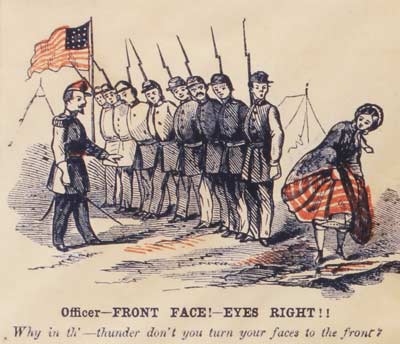 Traditional histories of the Civil War steer clear of sex and birth control in favor of heroes and battles. This ignores reality. Court martial records list over 100,000 incidents of sexual misconduct, and the Surgeon General of the United States Army documented 183,000 cases of venereal disease in the Union Army. The men (and women, too) who produced these alarming statistics came from all ranks of society. Many were farmers and uneducated workers living beyond rigid parental and church rules for the first time. Military service thrust them into the “outside world” of violence, alcohol, and prostitution. One soldier writing home complained about “the Pocks and the Clap. The cases of this complaint is numerous, especially among the officers.” Another wrote to his wife, “you would think that there was not a married man in the regiment.”

Facing an epidemic of venereal disease, the Union army tried a novel solution — government sanctioned prostitution — in Nashville and Memphis, Tennessee, from 1863 to 1865. Nashville at first expelled women “of vile character,” sending them up river to Cincinnati, only to see them turned away. Col. George Spalding, Provost Marshall of Nashville, introduced a system of licensed prostitution, with periodic medical exams and hospital treatment for venereal disease. The number of licensed prostitutes rose and fell with the transit of troops through the city, but the incidence of disease declined sharply. A report issued after the war proclaimed the experiment a success, as testified by the influx of prostitutes: “…many of the better class of prostitutes had been drawn to Nashville from northern cities by the comparative protection from venereal diseases which its license system afforded.” In Memphis, a program of registration, inspection, treatment, and licensing met with similar success until closed at the war’s end. The report of the Surgeon General of the United States Army concluded that “while it does not encourage vice it prevents to a considerable extent its worst consequences.” 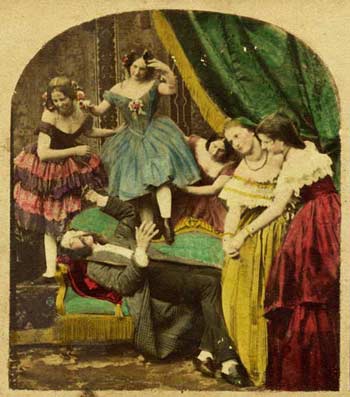 Military surgeons documented Civil War era problems of alcohol and sexually transmitted disease. Statistics they compiled showed that drunkenness spiked just as soldiers entered service, coinciding with their first time away from home, and again at the end of the war, as they celebrated victory. Proximity to cities also correlated with increased alcohol consumption. African American soldiers got drunk less often than their white compatriots; just one in 4,500 required medical attention for alcohol problems, compared to one in 220 for Caucasian soldiers. Venereal disease emerged as a serious health issue during the Civil War. Among Union white troops, the surgeons treated over 73,000 for syphilis and over 109,000 for gonorrhea. Incidence of those diseases among African American soldiers was less than half that of the white troops. In the eyes of military leadership, prostitutes and “camp followers” drove venereal disease to alarming levels, and threatened military readiness.

Soldiers bought contraceptives and sexually explicit material by mail. Thomas Ormsby, for example, sent soldiers a flyer listing such goods in an envelope with patriotic symbols. Ormsby enclosed his card and a list of medical advice books, including Aristotle’s Masterpiece and several works on “reform physiology” by Origin of Life author Frederick Hollick. Far more racy offerings could be found in the accompanying “Private Circular for Gentlemen Only”. This offered “fancy” literature, erotic, and even pornographic pictures, contraceptives (“French safes” or condoms), and “sex toys.” Ormsby’s address appeared nowhere on the Circular, and he promised to send the material anonymously, “in such a manner as to defy detection.” The recipient of these flyers, Corporal James Schelly of the Pennsylvania volunteers, died in combat near Richmond, Virginia on June 30, 1862.