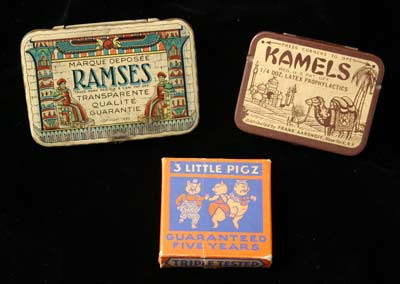 The rubber vulcanization process was patented by Charles Goodyear in 1844. The first rubber condom was produced in 1855. For many decades, rubber condoms were manufactured by wrapping strips of raw rubber around penis-shaped molds, then dipping the wrapped molds in a chemical solution to cure the rubber. In 1912, a German named Julius Fromm developed a new, improved manufacturing technique for condoms: dipping glass molds into a raw rubber solution. Called cement dipping, this method required adding gasoline or benzene to the rubber to make it liquid. Latex, rubber suspended in water, was invented in 1920. Latex condoms required less labor to produce than cement-dipped rubber condoms, which had to be smoothed by rubbing and trimming. Because it used water to suspend the rubber instead of gasoline and benzene, it eliminated the fire hazard previously associated with all condom manufacturers. Latex condoms also performed better for the consumer: they were stronger and thinner than rubber condoms, and had a shelf life of five years (compared to three months for rubber).

The 1918 Crane ruling legalized doctor prescribed contraceptives used for the prevention of disease. This ruling gave the condom industry an increased level of respectability. Additionally, it allowed people to buy a cheap over the counter contraceptive method. Although the gross profits from condom sales were eclipsed by the sales from feminine hygiene products, the number of condoms sold in the United States soared; by 1931, the top 15 U.S. condom manufacturers produced 1.44 million condoms daily. Improvements in production and packaging solidified the role of the condom in the American contraceptive market. After the World War II, condom sales continued to grow. From 1955–1965, 42% of Americans of reproductive age relied on condoms for birth control. In Britain from 1950–1960, 60% of married couples used condoms. 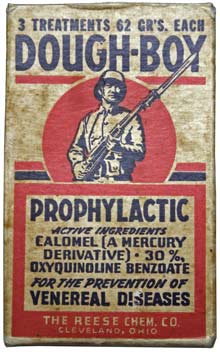 The word prophylactic means a protective measure against disease. This describes the condom’s primary purpose: to stop the spread of disease-causing bacteria. We often still refer to condoms as prophylactics. But not all prophylactics employ the barrier method of condoms; some use chemicals — disinfectant ointments and solutions — to eradicate germs that cause venereal disease. This method involved injecting chemicals into the urethra and washing the whole groin area after intercourse. In World War I, British, French, and German armies issued condoms to their troops, while Americans debated the morality of this policy. Some saw it as an invitation to promiscuity. Initially, American soldiers only got clean-up kits to be used after sexual contact. When American forces began contracting venereal disease at epidemic level, military leaders finally issued condoms to our soldiers. Much changed by the time of World War II: American soldiers received both condoms and chemical prophylactic kits. Disease prevention became a routine part of military training films, posters, and lectures. The “Doughboy” Prophylactic kits seen here, manufactured by Reese Chemical Company of Cleveland Ohio (today Reese Pharmaceutical Company), were still being issued to the United States troops during World War II.

“A recent development is the medicated sponge. It can be made inexpensively and does not require a medical examination. The reliability of a foam sponge is somewhere between 55-95% effective, and physicians agree that the diaphragm-jelly is more reliable but that the simplicity and availability of the sponge adds to its usefulness.” 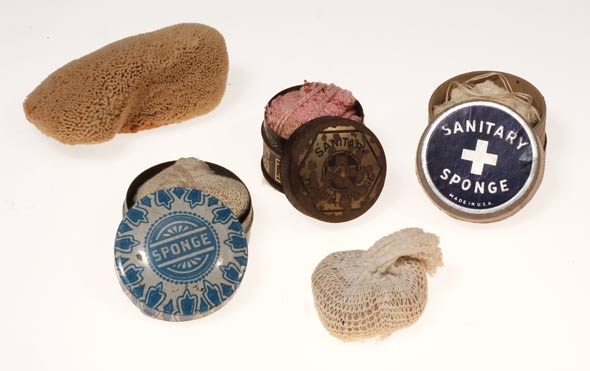 Tyrer also describes how to make and use a contraceptive sponge. Norman E. Himes, Ph. D. also described the method in his 1938 book Practical Birth-Control Methods:

“Either rubber sponges or natural sea sponges are used. The sponge should be cut 2-3 inches in diameter, but it is better to err on the side of too big than too small. It is advised to use a spermicidal agent with the sponge. Soap can be used, but it often stings; jellies or a new foam powder are recommended. Strong soaps, like laundry detergent are not to be used. If the sponge is left in for 8 hours or more, douching is not necessary. The sponge should be disinfected, either by soap and water or a disinfecting solution. Rubber sponges can be boiled, but the sea sponge tends to shrink and harden when boiled.”

Improvements in spermicidal chemicals allow a greatly improved sponge to reappear as a choice for contraception in the late 20th century.