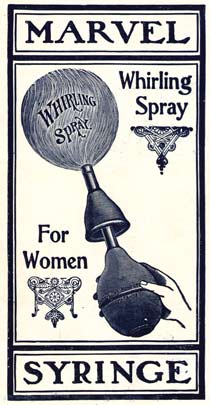 Douching as a Birth Control Method

Clinical investigations of the 1920s and 1930s showed very high failure rates for douching as a contraceptive method. In 1928 James F. Cooper, M.D., Medical Director of the Clinical Research Department of the American Birth Control League, wrote about the limits of douching as birth control in Technique of Contraception. Dr. Cooper even mentions advertisements in women’s magazines and states:

“It is to be feared that such advertising will enhance the vogue of the douche as a method of contraception.”

Advertisements used the vague term “Feminine Hygiene” and continued to sell douching kits and solutions. The Lysol disinfectant douche became a top-selling feminine hygiene product from the 1930s through the 1960s. The douching kits were inexpensive and readily available from drug and grocery stores. Full-page advertisements featuring “eminent women physicians” endorsing such products appeared in many women’s magazines. Many douching solutions proved ineffective as spermicidals. Some even had toxic effects that inflamed, irritated or even burned the vagina and cervix. Today douching is not recognized as a birth control method. It is considered harmful as it alters the natural healthy state of the vagina.

Using an antiseptic douche after intercourse was thought to kill any sperm left in the woman’s body. Antiseptic chemicals came in a variety of other forms including: powders, foaming powders, effervescent tablets, jellies and suppositories (also called pessaries). These would have the advantage of being introduced before rather than after the sex act. Ingredients in such products varied greatly, as did application techniques.