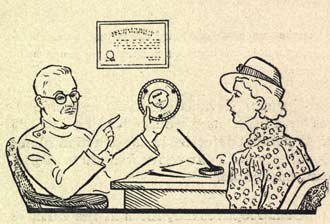 Conception is central to the human experience, yet for centuries the process remained misunderstood. Doctors giving contraceptive advice in the 19th century often recommended having sex only during the “safe period,” when a woman was not ovulating. But before 1930 (and even after), most physicians misidentified the time of ovulation. By studying animal behavior, they thought women were “safe” from pregnancy at the midpoint of their menstrual cycle. This is in fact when women are most likely to conceive.

In the 1920s and 1930s two gynecologists, Kyusaku Ogino in Japan and Hermann Knaus in Austria, studied ovulation carefully. They concluded that it normally occurs from 12 to 16 days before the onset of the menstrual period. They also asserted that an unfertilized ovum had a brief life, probably less than a day. At last, it seemed, the “safe period” could be more accurately determined.

Leo Latz and the Rhythm Method 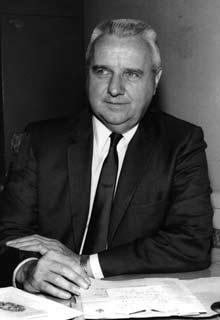 Many shared Leo Latz’s faith in the science behind the Ogino-Knaus findings. But to apply them to birth control is not always so simple, nor straightforward. Calculating the time of ovulation can still be tricky. It varies from woman to woman, and a woman can ovulate at a different time each month. Stress, illness, or interruptions in normal routine can also alter a woman’s cycle. Despite these uncertainties, the Ogino-Knaus method caught on, as evidenced by the proliferation of rhythm method calculators after 1930. Companies produced graphs, wheels, calendars, and slide rules, which cost from 10¢ to $5.

Only an engineer could make it work:
Gilmore Tilbrook and the “Rythmeter” 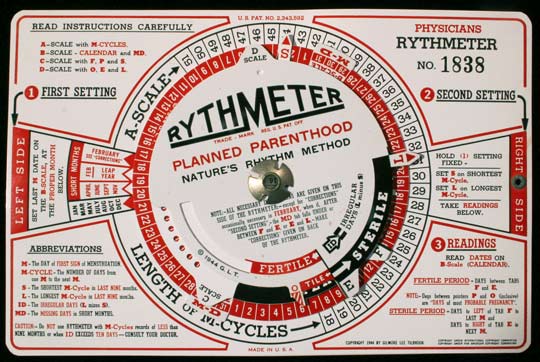 The “Rythmeter” ranks as one of the most intriguing devices for calculating the time of ovulation and the fertile and infertile periods of the menstrual cycle. Tilbrook, a consulting engineer, took on the challenge of making such a calculator. He recalled its genesis years later: …in 1930, on a visit at Graz, Austria, Dr. Knaus explained his conclusions regarding the exact time of ovulation of a human female. [I was] convinced of the importance of this theory – – especially to those of the Catholic Faith. A doctor friend exclaimed: “Tilbrook, you are an engineer – – Why can’t you work out a simple, foolproof calculator for the accurate application of the Rhythm?” Tillbrook conferred with leading medical experts on “Nature’s Rhythm Method,” including Leo Latz, Thurston S. Welton, C. G. Hartman, and Robert Latou Dickinson. The “Rythmeter” was an ingenious calculator, but even Tilbrook cautioned women not to use it without having a record of at least nine months of past menstrual cycles.

Among Roman Catholics, the rhythm method got a mixed response. Men and women anxious to limit their families saw it as a possible salvation. But Cardinal Hayes of New York cautioned, “Instead of being freely taught and commended, it (rhythm) is rather to be tolerated as an extreme remedy or means of preventing sin.” The Catholic Medical Guardian reported in 1935 that “the calculation of the ‘sterile period’ is never easy and in many cases appears to be impossible.” Advertisements in Catholic magazines for books and pamphlets on the rhythm method declined after 1934. Interest yet remained, and in 1951 Pope Pius XII sanctioned the rhythm method as a “natural” method of regulating procreation. In 1955 over 65% of Catholic women surveyed said they used Rhythm.

The Rhythm Method became even more popular when used in conjunction with new ways to determine the timing of ovulation. By measuring and recording body temperature, one can detect small changes, indicating that ovulation has occurred. This finding dates to research by Mary Putnam Jacobi in 1876 and was confirmed by T. H. Van de Velde in 1904. Van de Velde charted body temperature over a month and noted that the lowest basal body temperature, taken when one wakes in the morning, coincided with ovulation. This finding was applied to birth control in 1960 by Wilhlem Hillebrand, a German Catholic priest. Proponents of a natural form of birth control also gauged the timing of ovulation by noting changes in cervical mucus. This approach became knows as the Ovulation Method, or Billings Method, advanced by John and Eveyln Billings in 1964. The Sympto-Thermal Method of the late 1970s combined rhythm, temperature, and mucus signs.

In 1953 Drs. John and Evelyn Billings of Melbourne, Australia, began work on a method of natural family planning based upon observed changes of cervical mucus during the monthly menstrual cycle. Those changes could be used to determine the time of ovulation and hence a woman’s period of fertility. The Billings’ interest stemmed from concern over the unreliability of Rhythm method. Negative side effects of the Pill added to their concerns after 1960. They collaborated with endocrinologist James B. Brown to further study the relationship between cervical mucus and fertility, specifically to measure the hormonal patterns of women. In 1964 John Billings outlined his work in The ovulation method; the avoidance of pregnancy in medical practice, by a technique which is safe, reliable and morally acceptable. In the ensuing decades, before his death in 2007, he and his collaborators championed the method worldwide. The World Health Organization sanctioned their efforts by terming it the Billings Ovulation Method.

A new development in calendar-based methods occurred in 1999, when Georgetown University introduced the Standard Days Method. The Standard Days Method is promoted in conjunction with a product called CycleBeads, a ring of colored beads which are meant to help the user keep track of her fertile and non-fertile days. One concern related to the use of calendar-based or safe period methods is their relatively high failure rate, compared to other birth control methods. Even when used flawlessly, calendar-based methods, especially the rhythm method, result in a high pregnancy rate.