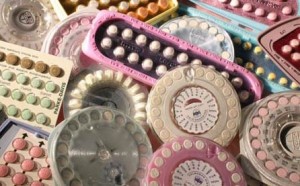 The birth control Pill was the first medication approved for long-term use by healthy people and the first 99% effective way to prevent conception.

The Pill (hormonal contraception taken by mouth) fulfilled a dream of activists Margaret Sanger and Katherine Dexter McCormick. Both spurred its development, and McCormick paid for the research. Over time, the Pill helped millions of women avoid unplanned pregnancies. Oral contraception, or “OC,” clearly separated the sex act from birth control. Couples welcomed not having to stop to put on a condom or insert a diaphragm. But the liberation from messy, old-fashioned methods came at a cost. Scientists tested the drug on Third World women. The large doses of hormones in the Pill’s early form caused serious side effects. Physicians had to prescribe the Pill, making it unavailable to women without the resources to visit a doctor or clinic. Feminists attacked the method as harmful and exploitive. The Roman Catholic Church opposed the Pill as unnatural.

How “the pill” works

The Pill’s synthetic hormones thicken cervical mucus to prevent sperm from reaching the egg, make it difficult for a fertilized egg to implant in the uterus, and most importantly, prevent ovulation from taking place. Women still have monthly bleeding with most brands of the Pill. Early researchers thought women would need some semblance of menstruation to reduce their anxiety about getting pregnant. Scientists soon discovered that smaller amounts of hormones prevented conception as well as large doses did. The smaller dose reduced the risk of serious side effects such as a blood clot or stroke. The Pill’s hormone content in 2009 was dramatically lower than in 1960. In 2009 most oral contraceptives contained the same type of estrogen, ethinyl estradiol, but different kinds of progestin. Some of the “combination” pills (those that include both estrogen and progestin) featured hormone doses that change weekly during one cycle.   Enovid was first marketed in the U.S. in 1957 not for birth control but to help with “disturbances of menstruation” (see Enovid brochure above). The U.S. Food & Drug Administration mandated a warning on the label that it would prevent ovulation. And women quickly learned that this pill would prevent pregnancy. By 1959 over 500,000 American women used Enovid for contraception. The FDA approved the Pill’s use for method of birth control in 1960. Other manufacturers soon entered the market: Syntex, Ortho, Wyeth, Parke Davis, and more. In 2009 an estimated 12 million women in the U.S. and 100 million world wide use the Pill for contraception.

The first oral contraceptive, Enovid, was manufactured by G. D. Searle and supplied free to clinical trials in Puerto Rico and elsewhere. It contained 10 milligrams of norethynodrel (a synthetic form of the hormone progesterone) and .15 grams of synthetic estrogen. Estrogen was a byproduct of the manufacturing process, but removing it caused more breakthrough bleeding. So estrogen stayed in the formula. By 1958 the Pill had been tested on 830 women, mostly in Puerto Rico. Many question the ethics of such testing, but Puerto Rican women actively sought this new way to control family size.

In 1964 David Wagner patented models for two Pill dispensers, circular and rectangular. An engineer, Wagner was acting as a private citizen and consumer. He wanted to help his wife remember when to take the Pill and if she had taken it on any one day. The Pill first came in a bottle, like other medicine. Women were to take a pill each day for 20 days, then not take it for the next seven days. Though some companies issued a calendar with the pills the plan confused many consumers. Drug companies refused to purchase Wagner’s design but later introduced pill dispensers that closely resembled his patent Wagner sued and won out-of-court settlements. The Pill represents the first use of compliance packaging for medicine.

Impact of the Pill

The Pill became the symbol of the so-called “sexual revolution” of the 1960s-70s. Many blamed it for the events of these years — a rise in single motherhood, unmarried couples living together or in communes, open marriage and wife swapping, women’s liberation, and increased visibility of sex in the media. Scholars now recognize that these cultural shifts began well before the advent of the Pill. But the Pill’s development does represent a watershed in the history of medicine, women’s health, reproduction, and contraception.