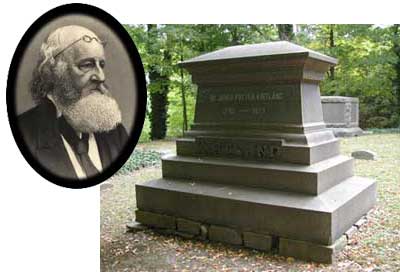 Jared Potter Kirtland (1793-1877) was a naturalist, horticulturalist, and politician as well as a physician and co-founder of Western Reserve University’s Medical School (referred to as the Medical Department).

Jared was born in Wallingford, Connecticut, his father came to Poland, Ohio in 1803, leaving young Jared with his maternal grandfather (Jared Potter). Potter was a physician and naturalist and under his supervision, Kirtland became an expert in cultivating trees and flowers, and assisted in caring for a large plantation of white mulberry trees used to cultivate silk worms.

At age twelve, Kirtland began to study the Linnaean system of botany, a subject that would hold his attention throughout his life. He began his study of medicine in Wallingford with a preceptor, Dr. John Andrews and later continued with Dr. Sylvester Wells in Hartford. In 1813 he entered the newly formed department of Medicine at Yale College, it is said he was the first student to matriculate in that department. In addition to medicine Kirtland had private instruction in the areas of botany, geology, mineralogy and zoology. He also studied at the medical department of the University of Pennsylvania in Philadelphia, but returned to Yale and received his degree in 1815.

Dr. Kirtland practiced medicine, held an elected position of probate judge and continued his work cultivating flowers, trees and honey bees. His wife, Caroline Atwater and their two children became ill with “sinking typhus fever”. Caroline and one of the children died of the disease. Dr. Kirtland, shocked and distraught over his loss decided to move to Ohio where his father was still living. He planned to occupy himself with mercantile pursuits as well as farm cultivation in Poland, Ohio. Demand for his medical services in Poland and the surrounding area was so great that he continued to practice medicine after all. Dr. Kirtland gained credit for treating patients during an epidemic of sinking typhus, throughout many counties in Ohio, at a time when traveling conditions could be harsh and treacherous.

In 1828 Dr. Kirtland was elected to the state legislature, where he served three terms, and quickly became a leader. He worked for prison reform and helped to get a charter for the Ohio Pennsylvania Canal.

Dr. Kirtland joined Willoughby Medical College in 1842, he stayed only one year and then came to Cleveland and along with Drs’ John Delamater, Horace Ackley, and John Cassels, founded the Medical Department of Western Reserve University (also known as Cleveland Medical College) where he held the position of Professor of Theory and Practice of Medicine until 1863.

During the Civil War, Dr. Kirtland at age sixty-nine, worked as an examining surgeon to recruits in Columbus. He would not accept any money for his services, and donated his pay to the Solders Aid society of northern Ohio. Dr. Kirtland was very enthusiastic about a great diversity of subject matter, he was considered a great educator and was very well liked by his contemporaries.

Thank you for joining us on this tour of Lake View Cemetery!