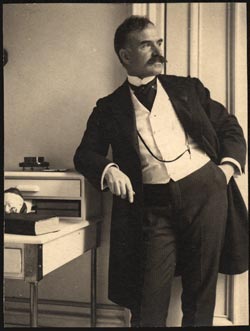 William Thomas Corlett (1854–1948), a snapshot taken in Corlett’s “White Office” at his home on corner of Euclid Avenue and 20th Street, Cleveland at the end of the 19th century. Reproduced courtesy of the Stanley A. Ferguson Archives, University Hospitals of Cleveland.

William Thomas Corlett was born in Orange, Ohio and educated at Oberlin College from 1870 to 1873. He studied medicine at the medical department of the University of Wooster (forerunner of the College of Wooster), graduating in 1877. After teaching at Wooster for two years he traveled to London and Paris to study skin diseases and later become a Fellow of the London Royal College of Physicians. Corlett returned to Cleveland in 1882 and was appointed lecturer, then Professor of Skin and Genitourinary Diseases at Wooster in 1884. It was during this period he began collecting photographs and glass lantern slides. Three years later, Corlett resigned to take up the equivalent appointment at the Medical Department of Western Reserve University, and was appointed as Professor of Dermatology. He returned to Europe in 1889 and visited medical centers in Vienna and Berlin and reveled in the rich clinical material London and Paris afforded. On his return to Cleveland, Corlett’s title at Western Reserve University was changed to Professor of Dermatology and Syphilology, a Chair he held until 1914, when he became Senior Professor, and a decade later, Professor Emeritus. During his career, Corlett worked at the following Cleveland hospitals: St Vincent Charity, St Alexis, Lakeside and City (Metropolitan).

Continue to next page of online exhibit Corlett Collection.

This exhibit derives from research conducted at the Dittrick Medical History Center in 2007  by Paula Summerly, PhD. The resulting paper, Photographing Dermatology: The Collections of William Thomas Corlett (1854-1948), was published in the International Journal of Dermatology, August 2008.