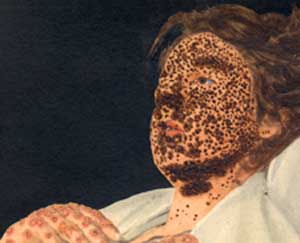 In 1979 the World Health Organization declared that smallpox, a dreaded infectious disease, had been eradicated from the face of the earth. For the first time in human history, a disease had been eliminated.

Smallpox had been the most terrifying and deadly of all diseases. By the 17th century,it became the major epidemic disease in Western Europe. An isolated case of smallpox often erupted into a full epidemic in a very short time, and death rates soared. Further, while the disease seemed to favor adults for centuries, it became a common and lethal disease of children in the 18th century.

Smallpox is an infection caused by the virus called variola, a member of the poxvirus family. It is strictly an infection of human beings, and is a relatively contagious disease. Most infections were caused by contact with someone who had already developed the characteristic skin lesions (pox) of the disease, from contaminated air droplets, and even from objects used by another smallpox victim (books, blankets, utensils). The respiratory tract was the usual entry point for the variola virus into a human being.

After the virus entered the body, there was a 12-14 day incubation period, although no symptoms would be apparent. After incubation, symptoms appeared abruptly and included fever and chills, muscle aches, and a flat, reddish purple rash on the chest, abdomen, and back. These symptoms lasted about three days, and then the rash faded and the fever dropped. A day or two later, fever would return, along with a bumpy rash starting on the feet, hands, and face. The rash progressed, ultimately reaching the chest, abdomen, and back. The individual bumps (papules) would fill with clear fluid, and eventually become pus-filled over the course of 10-12 days. These pox would eventually scab over, each leaving a permanently scarred pock or pit when the scab dropped off.

Death from smallpox usually followed complications such as bacterial infection of the open skin lesions, pneumonia, or bone infections. A very severe and quickly fatal form of hemorrhoagic smallpox resulted in massive, uncontrollable bleeding (hemorrhage) from the skin lesions, as well as from the mouth, nose, and other areas of the body. Death from smallpox (variola minor) ranged up to about 35%, with the more severe, hemorrhagic form (variola major) nearly 100% fatal.

Treatment for smallpox was only palliative: relief of pain and suffering. No treatments were ever found to halt the progress of the disease.