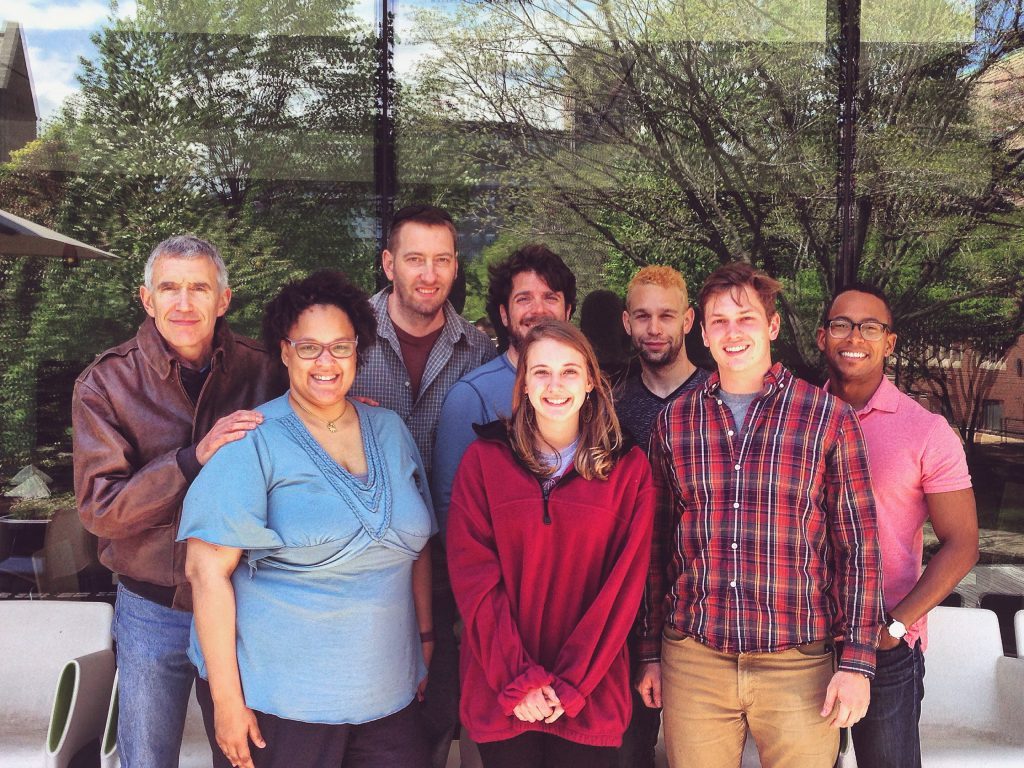 Intelligence is found first by attention to the substantial facts of life, not in the speed by which one passes over them.

The Ethics Table grew out of the Ethics Table, a key initiative of the Beamer-Schneider Professorship in Ethics. The “table” is a metaphor that has many institutional forms. In all these forms, “ethics” is meant broadly in the original sense as ethos, a way of life, and so includes politics as well as more private matters.  In 2018, the Professorship specified the focus to ethics and morals to convey closer analysis of the difference between the ethical (prudential realm of personal flourishing or agency development) and the moral (obligatory, interpersonal, and social justice realm).  To preserve developmental history, the names of all those initiatives existing prior to this change have been preserved without disambiguation.

The history of the first Ethics Table

One thing wonder does is to slow things down and to open up the space of possibilities.

In the mid-1990s, Bob Lawry from the School of Law convened a summer ethics institute that allowed Case Western Reserve University faculty to explore incorporating ethics into their classes. In 2011-12, supported by the Kent H. Smith Charitable Trust, the Beamer-Schneider Professorship renewed the institute in a different, evolving form–and opened the Table to staff, administration and to graduate students who in direct ways through their programs foster the ethical learning environment of Case Western Reserve University. 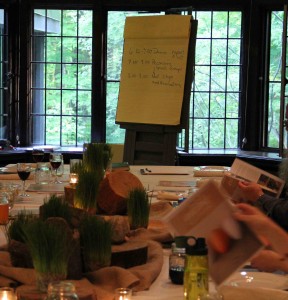 In its new form, the Ethics Table’s first pulse was during the year 2011-2012. The group met daily for a week in August 2011 to explore the idea of a university ethos. Readings included D.H. Winnicott’s Playing and Reality; Dan Scheinfeld’s et al., We Are All Explorers: Learning and Teaching with Reggio Principles in Urban Settings; Martha Nussbaum’s Creating Capabilities; Alice Munro’s Runaway, and the Share the Vision common reading for the year, Justice by Michael Sandel.

The group then met monthly around town — to get out of school, gain perspective and to support local businesses. We ate at the Squirevue Vallee Farm with Spice of Life farm to table catering, at Le Petit Triangle in Ohio City, Club Isabella in University Circle, Prosperity Social Club in Tremont, the Alumni House where we skyped in philosophical counselor Lauren Tillinghast, Empress Taytu in East Cleveland, Café Anatolia in Cleveland Heights, and at the Greenhouse Tavern downtown.

Finally, the group convened for a two day retreat in May 2012, with The Montessori School of Cleveland and Roger Saillant (Fowler Center) as special guests at the Inamori Center and at the Manor House of Squirevue Vallee Farm. The group reflected on its future and on the prospect of future developing our university’s ethos. Members of the group also chose to read Simon Blackburn’s Being Good, which was given to all members of the group for their reference.

Developing from the feedback of the group in 2011, the Ethics Table took on two different forms, (1) the Ethics Table Fellows and (2) the Chat-n-Chew discussion lunches.  In 2015, the latter evolved into a community based group as well, spinning off The Moral Inquiries in Cleveland Heights so that there were three versions of the Table operating from 2015-2019.  Below are the preserved archives of these.

The Ethics/Moral Table Fellows was a group of students, staff, and faculty selected from an application process that focused on a project to improve the ethical learning environment of Case Western Reserve University. The fellowship was periodic, based on perceived need and interest.

Across the year, the fellows met monthly, reading and discussing ethical theory, working on individual projects, and preparing for an open symposium at the school year’s end. Fellows were given some research money and a stipend or other appropriate form of compensation at year’s end for their work. 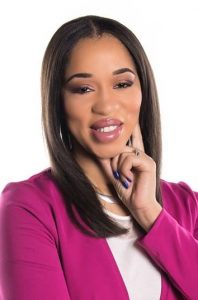 Heather Clayton Terry, MPA, is an advocate, coach and philanthropist. She currently works as the Philanthropy Coordinator for Dominion Energy Charitable Foundation. She previously worked at the Flora Stone Mather Center for Women at Case Western Reserve University as the Associate Director for Women in Science and Engineering.   Her project will look into potentially recommending or establishing an ethics committee and/or an ethics convening program for Dominion Energy. Currently, Dominion Energy has a safety committee in place at every facility and a mandatory safety meeting for all employees twice a year.

Emily Dragowsky, PhD, is a staff member at CWRU, aiding researchers in their use of high-performance computing resources. Emily’s project is intended to encourage students to develop a practice of evaluating the moral considerations arising from efforts to achieve collective security. Whether in a community or in international relations, actions taken to achieve security often involve the use of force through strategies directed by often unknown representatives in the name of all community members. How can a person reconcile their ethical framework and moral relations to others in a representative, collective context? Emily has had the good fortune to work as a scientist with people from many countries and was also a junior officer in the United States Air Force. 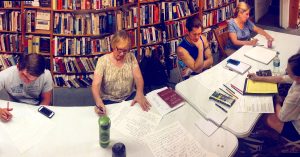 Emily Dragowsky, 2nd from left, at the Moral Inquiries 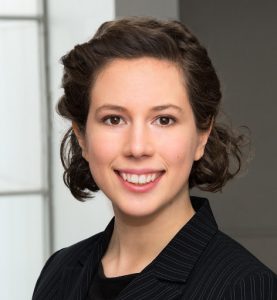 Emily Jennings is an Accounting Clerk in the Office of Research Administration, Sponsored Projects Accounting and a frequent member of the Ethics Table and the Moral Inquiries.  Her project is to help incoming students think about what it means to make an ethical home and empower them to make ethical decisions in their private lives. Illuminating the ethical choices inherent in creating a living space will help student make better choices and improve their lives and their communities. Furthermore, it will help them think of themselves as moral actors capable of changing systems for the better. 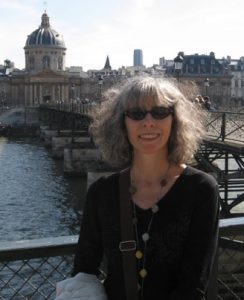 Annie Pécastaings teaches writing-intensive courses at CWRU. Her interests include the Gothic novel and travel literature. Her project focuses on walking with others to build a sense of community. These group walks aim to meet two goals: to cross over the visible and invisible lines that crisscross the city and delineate enclaves; to experience the city as a shared, common ground to which our common fate and stakes are tied. Her work relates to the courses she teaches. 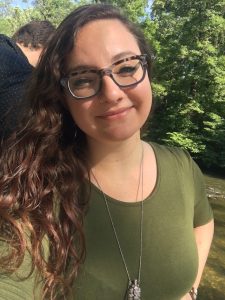 Natalie Snyder is a senior studying philosophy and political science. Her interests are in health, animal rights, environmental justice, feminism, the sublime, and public policy.  She hopes to get her PhD in Philosophy or work in government and policy.  Her project is to examine and address -at least as proposals- the sources of profound dissatisfaction with CWRU that students were reported to have in the CUE report of 2017, focusing especially on systemic silencing and a lack of a comprehensive and spiritual understanding of health. 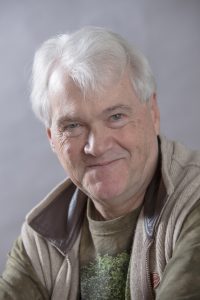 Peter J. Whitehouse, MD-PhD, is a Professor of Neurology and former or current professor of Psychiatry, Psychology, Cognitive Science, Neuroscience, Bioethics, History, Nursing and Organizational Behavior at Case Western Reserve University, Professor of Medicine at the University of Toronto, and President of Intergenerational Schools International. Peter is a prevention oriented, life course, developmental neurologist. He is the author of hundreds of academic papers and book chapters ranging from genetics, to clinical dementia to public health and bioethics.  His project is the design of an intergenerational course on wisdom, aimed for both SAGES and the Siegel Lifelong Learning program.

In the 2017-2018 academic year, the Chat-n-Chew lunches met approximately once a month on Fridays during Common Hour, starting in January.  The Fall schedule involved a hiatus as the Philosophy Common Hour was essayed. The chat-n-chews were open to any member of the campus community.

January 26th, Guilford House Lounge, “Is ‘diversity’ a cop-out word for the task of equality?”

Friday, November 16th, 12:30-2PM, Clark Hall 206, Wonder and Self-Concept: From an Idiosyncratic Trait to Something We May Train Ourselves to Embody, presented by Stormy Sweitzer

Friday, February 15th, 12:30-2PM, Cleveland Room, Thwing, Education in the Service of Justice: What CWRU Might Learn from Kolvenbach, presented by Bharat Ranganathan

How does the common good relate to Cleveland? On the one hand, Cleveland is a large and growing metropolitan area, with renowned hospitals, museums, national parks, and universities. On the other hand, Cleveland is best by economic, political, and social problems. During the 2019-2020 academic year, the Ethics Table will meet to explore various social issues that affect the common good, including: food scarcity; the degradation of the Cuyahoga River and the Great Lakes; and racial and income gaps. In conversation with speakers from the Cleveland area, we will further explore the concrete steps they are taking to address these issues, from reimagining what counts as a community to developing a sense of place.

In addition to conversations over lunch, there will also be opportunities to visit and volunteer with the various speakers.

For more information, or to be put on an announcement list, please email bxr38@case.edu .

The Ethics Table generated a group that mets in the historic Coventry neighborhood of Cleveland Heights at Mac’s Back’s Books, the much-loved independent bookstore that adjoins Tommy’s. Called “The Moral Inquiries ~ a Heights gathering,” this community group discussed moral issues and was co-organized with members of the community.

Over its four years and six months, the group hosted or co-hosted over 110 meetings, included over 200 members, and involved more than a hundred people in semi-regular discussions in line with its philosophy of an “emerging curriculum.”  For instance, in 2016, the group found itself studying and discussing being a democratic citizen for over half a year as the General Election approached and then debriefing about the election afterward.  The group also often discussed global warming, responsibility for mass scale social problems, and obligations to future generations.

The oldest member of the group was 95 and the youngest attendee ever was less than six months.  Participants came from the Cleveland region sometimes as far out into the townships and were from all walks of life.  In addition, a sizable number of CWRU faculty, students, and alums participated at different times.

The group disbanded in 2019 due to its lead organizer needing to care for a newborn.