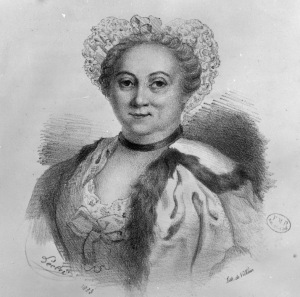 Angelique Marguerite Le Boursier du Coudray (1712-1790) was the “King’s Midwife” in France. And yet, Madame du Coudray left no journal and few personal papers, meaning that while her deeds are well-recorded, her life is still somewhat mysterious. She remained unmarried, though took on the title of Madame, appropriate to her work as a sage femme (literally “wise woman,” but also the French term for a midwife).

“Th[e] paradox of the singular, idiosyncratic woman who follows a ‘quest plot’ instead of a ‘marriage plot”

After ten years as a midwife in Paris, Madame du Coudray was hired by King Louis XV to travel across France to better train rural midwives. There were political motivations for this; Louis wanted to boost a “declining” population, and more subjects also meant more capable soldiers. Unlike Queen Charlotte of England who chose William Hunter as the royal obstetrician, Louis appointed du Coudray, a woman, to train women. Madame du Coudray became the national midwife in 1759, earning 8,000 livres a year (equal to that of a decorated military general).[i]

Madame du Coudray’s accomplishments are remarkable even by our own standards, but this is especially true considering the time period. After all, in Britain, midwives had been replaced by man-midwives (or surgeon/obstetricians) by the middle of the eighteenth-century. What led to so radical a shift? And why was du Coudray so successful, even in a “man’s world”? 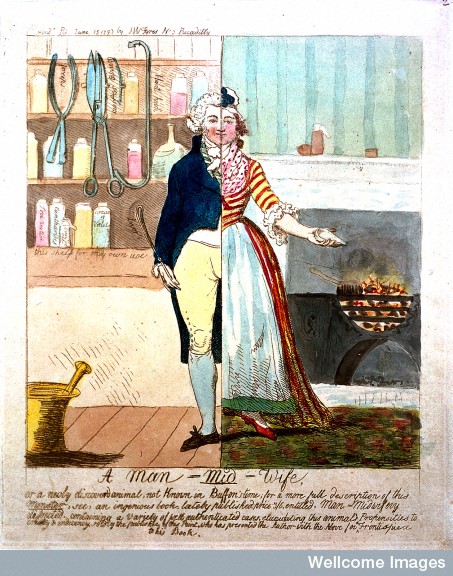 Adrian Wilson traces the English history of male practitioners to Percival Willughby of Derby, who served in “the midwife’s bed” from 1630 to 1670[ii]. This phrase, which comes from Willughby’s Observations, suggests a clandestine affair, a blushing sneak, almost unmentionable. In fact, most early male practitioners were called surgeons, which, as Wilson points out, “tends to conceal their obstetric practice.”[iii] Surgeons attended at the behest of the midwife, and Willughby himself only served in place of the midwife for three expecting mothers over the course of many years.[iv] Male involvement was unusual, but by the eighteenth century, midwives like Elizabeth Nihell could accuse man-midwives like William Smellie of releasing “swarms” of male midwives into practice.  A variety of things contributed to this change–so many, that we probably can’t point to a single event.  The advent of lying-in hospitals, as well as changes in fashion, politics, and social structure in England were part of the shift.[v]  It is also true that cases like the “Rabbit Breeder of Godalming” brought midwifery to embarrassing public notice in England.

‘Breeding Rabbits’ and the Power of Instruments 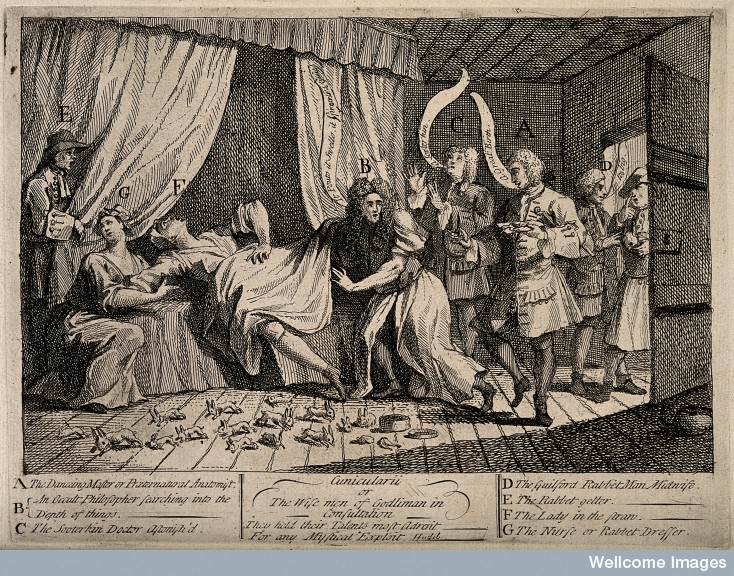 In 1727, Mary Toft mimicked birth pangs and contractions and fooled many into believing she had given birth to a brood of baby rabbits. The case was finally overturned by surgeon Sir Richard Manningham, who threatened to cut her open in a live vivisection. Toft confessed to the hoax–(who wouldn’t?) While Manningham’s threat was probably an empty one, it is useful case study for two reasons; first, Toft—as an uneducated woman—was thought incapable of fooling the medical men (who presumably “knew” more about birth than she).[vi] Second, Manningham’s threats were of a particularly surgical kind. The mystery of female anatomy would be rendered plain through the surgeon’s instruments. Instrumentation had been one of the ways in which male surgeons protected their interests, for only a surgeon could wield instruments, and only those wielding instruments could be considered surgeons. The fact that only man-midwives could use forceps helped to build their practice. The rise of the man-midwife and the rise of forceps tend to go together. So–given that all of this occurred around the same time du Coudray was practicing in France–how did she gain such a powerful position? Why wasn’t a surgeon obstetrician chosen as the national midwife?

Madame du Coudray among the Surgeons

In France, there was also a contest between male and female practitioners. After all, André Levret is considered one of the  most powerful and influential figures in French obstetrics. The procedure for breech delivery, “Mauriceau-Levret manipulation,” is named after him and physician François Mauriceau. At the same time, Jean-Louis Baudelocque was working with William Smellie’s methods to “modernize” obstetrics in France–and he did so partly through instrumentation. His pelvimeter measured  pelvic dimensions (to see if the pelvis was wide enough for uncomplicated birth). These two men were critically important for turning midwifery into a science in France, and it should be noted that Baudelocque was named the first chair of obstetrics by Napoleon in 1806. The tide was turning, therefore, and yet Madame du Coudray held a prominent position well into the 1780s. How did she accomplish this?

As Nina Gelbart points out in The King’s Midwife, du Coudray was not a feminist or even an advocate for other women. If anything, she de-emphasized her gender as much as possible, preferring instead to consider herself an equal to men. That means she often worked within the status quo rather than trying to change it. She wrote a medical text, amply illustrated, just as the man-midwifes had done, and as Gelbart explains, Coudray envisioned herself as a “man of action” [my emphasis]. Working within the system meant courting powerful friends–often among surgeons. Levret and an acquaintance of du Coudray, César Verdier, inspected her miraculous “machine” (or manikin) in 1756, approving of it and helping to spread her fame. This also helped to validate her practice. And what is this machine, but a kind of instrument–a piece of the mechanical and technological revolution for turning midwifery into a science? As Gelbart reminds us, even the language du Coudray uses is aimed at men–and though she taught mechanical means of birth to her female midwifery students, she also rapidly became the exception that proved the rule. She defied the marginalization of women by demanding attention, recognition, and payment for her work. Even so, she was also a vehicle for the very progress that was a distinct goal of the male physicians, obstetricians and surgeons.

Madame du Coudray was a remarkably successful woman, especially in terms of her legacy. Like Smellie, she developed a machine for teaching. Also like Smellie, she trained an enormous number of students (by 1780, two-thirds of the midwives in France were Madame du Coudray’s pupils!) Her career ended in obscurity, partly due to the revolution in France, but during her tenure and her travels, she was the most successful of all female midwives of the period.

[i] Gelbart, Nina. The king’s midwife: a history and mystery of Madame du Coudray. (University of California Press, 1999): 177

[vi] I do not wish to overstate this claim, but it seems apparent from the case that the surgeons felt justified upon discovering that Toft’s mother-in-law (a midwife) was behind the hoax. It did not occur to the male midwives that a woman, by virtue of being a woman alone, might know more about the workings of the female anatomy than the practitioner.