The origins of blood-letting date back to Hippocrates in ancient Greece when the practice was recommended to both prevent as well as remedy illness. Galen also supported therapeutic bleeding because it fit with his humoral theory. According to humoral theory, illness is caused by an imbalance of the body’s four humors: blood, yellow bile, black bile, and phlegm [1]. Thus, maintaining a balance of humors by the removal of excess blood was thought to preserve health.

The spring-lancet was predated by the thumb lancet (15th century) and fleams (17th and 18th centuries) [2]. Both these devices required the user to apply pressure manually on the blades against the patient in order make an incision. 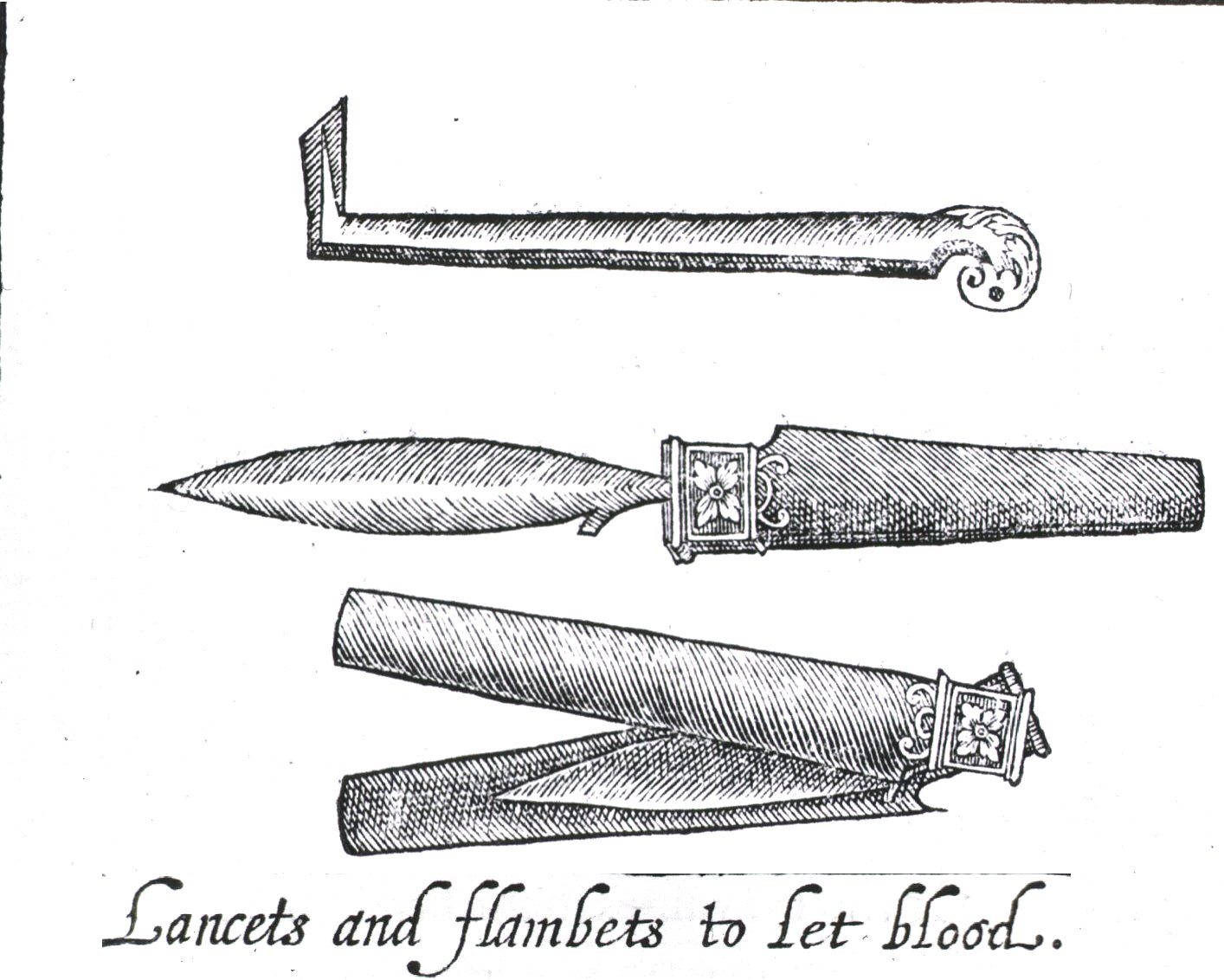 Based on the earliest records, the first spring-lancet likely originated in Austria during the 18th century. To use the lancet, the practitioner would pull back a lever, coiling the interior spring. When the lever was released and the spring recoiled, the silver blade would drive into the patient [3]. Proponents of the spring-lancet claimed it provided greater precision in nicking a vein so blood could flow steadily from the incision. These devices served two purposes: the general removal of blood from the body (usually in the spring, as humoral theory proposed that the volume of blood was highest during that season) and the localized draining of blood from an inflamed area. Thus the former prevented illness, while the latter treated it. 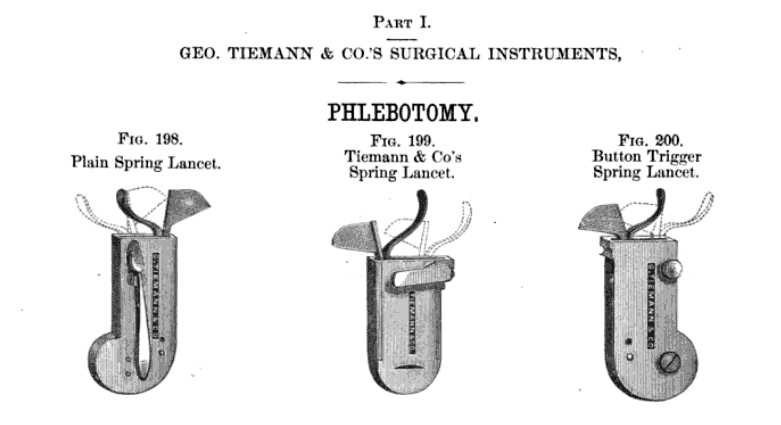 One of the benefits (?) of this design is that it allowed “untutored” bleeders the ability to make an incision over superficial veins. Thus, individuals without precise knowledge of the circulatory system could be fairly confident that they could remove blood without harming other vessels [4]. However, the French still preferred thumb lancets as they were less complicated and easier to use for physician/surgeons who were not ignorant of anatomy. 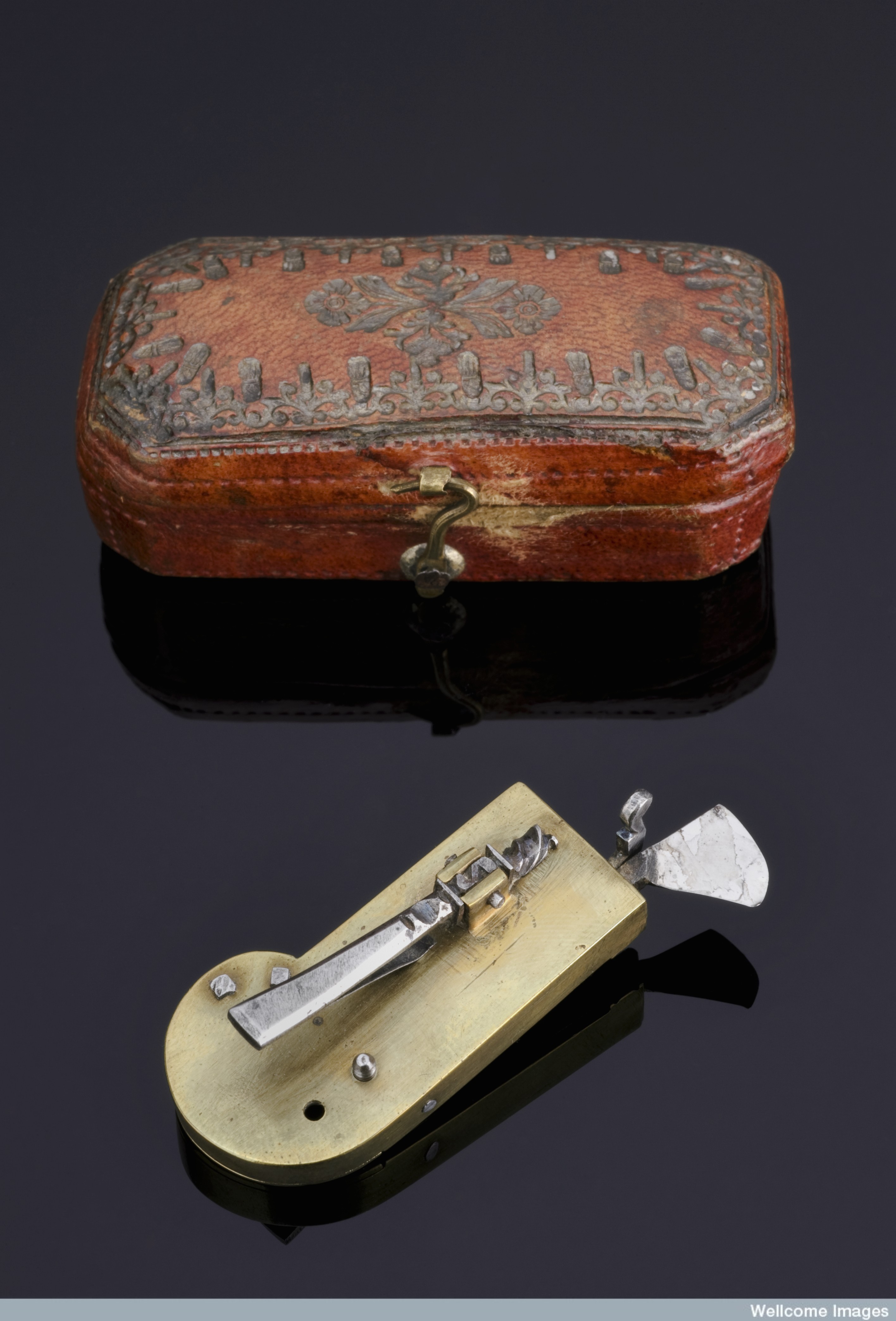 In the United States, the spring-lancet was much more economical than using other methods. One practitioner writing in 1813 stated “one spring-lancet, with an occasional new blade, will serve [a physician] all his life” [5, p. 281]. These devices were frequently very ornate and decorated with symbols that had a personal meaning to the owner. Unfortunately, spring-lancets were not indestructible. The spring could corrode due to trapped moisture acquired during use and cleaning [2]. Additionally, the mechanical complexity of the device made thorough cleaning difficult – making the transmittance of disease (not then a contemporary concern) much more likely. Despite these flaws, through at least the 1830s, every physician “without a single exception, carried a spring-lancet in his pocket, and daily used it” [6, p. 4].

In 1841, J.E. Snodgrass of Baltimore celebrated his apparatus in a poem entitled “To My Spring-Lancet.” The following stanzas allude to the frequent usage (and infrequent cleaning) of the spring-lancet for an American physician.

I love thee, bloodstain’d, faithful friend!
As warrior loves his sword or shield;
For how on thee did I depend
When foes of Life were in the field!

Those blood spots on thy visage, tell
That thou, thro horrid scenes, hast past.
O, thou hast served me long and well;
And I shall love thee to the Last! [7]

The conviction of Dr. Snodgrass’s ode may have been in response to the growing research and criticism against the efficacy of bloodletting. In the 1840s and 1850s, debate about the practice reached a peak when Dr. Hughes Bennett noted that rates of mortality from pneumonia decreased in a direct proportion to the decline in bloodletting [8]. Despite this, many physicians continued to use the spring-lancet to therapeutically bleed their patients. For example, Dr. A.P. Dutcher, at one time the President of the Cleveland Academy of Medicine, considered bloodletting to be “the most prompt and effective of all the known agencies that we possess to subdue inflammation” [9, p. 543].

Although the benefit of bloodletting as disease treatment was convincingly challenged in the mid-19th century, some physicians continued the practice for the next one hundred years. Fortunately, the growing acceptance of germ theory, as well as improved knowledge of the immune response, ushered in new aseptic surgical techniques. The reusable spring-lancet was no longer carried in every physician’s pocket, but instead “only found on the shelves of the medical curio cabinet” [10, p. 90]. 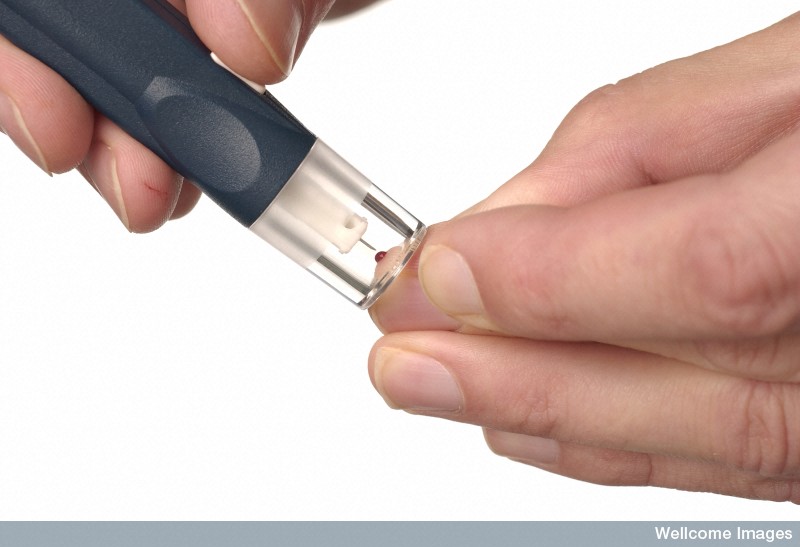 [1] Parapia, Liakat Ali. 2008. History of bloodletting by phlebotomy. British Journal of Haematology. 143(4): 490–495. [2] Kirkup, John. 1995. The History and Evolution of Surgical Instruments. VI. The Surgical Blade: from Finger Nail to Ultrasound. Annals of the Royal College of Surgeons of England, 77(5): 380–388. [3] Edmonson, James M. 1997. American Surgical Instruments: An Illustrated History of their Manufacture and a Directory of Instrument Makers to 1900. Novato, CA: Norman Publishing. [4] Davis, Audrey and Toby Appel. 1979. Bloodletting instruments in the National Museum of History and Technology. Smithsonian Studies in History and Technology Washington, DC, (41). [5] Dorsey, John S. 1813. Elements of Surgery: For the Use of Students with Plates, Vol. 2. Philadelphia, PA: Edward Parker. [6] Atlee, Washington L. 1875. Old Physic and Young Physic: Some of the Changes of the Past Half Century Contrasted and Compared and Their Advantages Estimated: the Annual Address Before the Medical Society of the State of Pennsylvania. Philadelphia, PA: Collins, printer. [7] Snodgrass, John E. 1841. To my Spring-Lancet. Baltimore Phoenix and Budget. 1(April): 33. [8] Thomas, D. P. 2014. The demise of bloodletting. Journal of the Royal College of Physicians Edinburgh, 44:72–77. [9] Dutcher, Addison P. 1857. Remarks on epidemic dysentery. Cincinnati Medical Observer. 1(December):535–544. [10] Stern, Heinrich. 1915. Theory and Practice of Bloodletting. New York, NY: Rebman Company.
Previous
Next