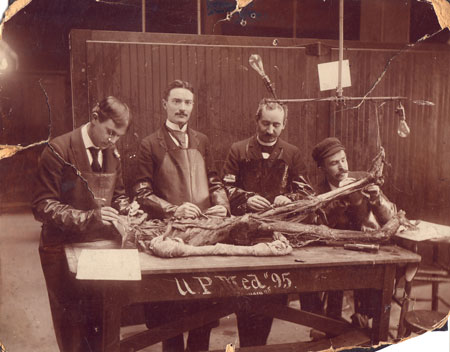 Part of the Dittrick collection; Dissection: Photographs of a Rite of Passage

Gross Anatomy, or the dissection of bodies by medical students for study has not always been a given of medical training. In fact, the practice has been fraught almost since the first, a battleground over bodies from the religious prohibition of the pre-modern period to a “gory” New York City riot in the eighteenth century when an enraged public rose up against body-snatching anatomists. What caused these tensions? Inconsistencies of jurisprudence and issues of class and race were all factors in the race to obtain a suitable corpse… And, given shortages, that sometimes meant “by any means necessary.” Let’s have a look at the issue in British and US history:

The 1832 Anatomy Act in England intended to provide greater access to cadavers for medical science, but it was viewed with enormous suspicion and public outcry. Called the ‘Dead Body Bill’, the ‘Dissecting Bill’ and the ‘Blood-stained Anatomy Act,’ it allowed the unclaimed bodies of paupers to be given to the anatomy schools.[i] The bodies consisted of poor, indigent, trod-upon groups. The 1834 Poor Law that followed added to the unease for the laboring poor in Britain; Peter Bussey, a 19th century Bradford Chartist, who claimed in 1838 that “If they were poor they imprisoned them, then starved them to death, and after they were dead they butchered them.”[ii]

Similar incendiary attacks were made in the United States, both before and after the New York “Doctors Riot” of 1788. The riot itself killed as many as twenty people and was sparked by a series of newspaper stories. In a Smithsonian article titled “The Gory New York City Riot that Shaped American Medicine,” author Bess Lovejoy remarks that a rash of media tales about grave-robbing medical students helped to stir unrest. Most of these robberies took place at potter’s field and the city’s so-called “Negroes Burial Ground.”[iii] Lovejoy quotes from a petition in February of that year: “young gentlemen in this city who call themselves students of the physic […] under cover of the night, in the most wanton sallies of excess … dig up bodies of deceased friends and relatives of your petitioners, carrying them away without respect for age or sex.”[iv] The practice of robbing graves among poor and minority groups persisted, however, well into the 19th century; John Harley Warner, co-author of Dissection: Photographs of a Rite of Passage in American Medicine, notes that in Boston in the 1840s, the influx of “Irish paupers” shifted the balance, though even in the twentieth century, African-Americans remained the primary “at-risk population.”[v] The New York riot—and subsequent laws in the US—were driven primarily by breaches in this “acceptable” practice of dissecting along race and class boundaries. Sentiments “boiled over” in New York when the body of a white woman was stolen from Trinity Churchyard.[vi] Warner cites a similar example of public outcry when the body of a former senator and son of President William Henry Harrison was discovered (by his son, no less) hanging in a dissection lab in Ohio in 1878.[vii] However, so long as the “resurrectionists” followed what a 19th century anatomist called the “prudent line of stealing only the bodies of the poor,” the practice continued unabated.[viii]

Anatomical specimens must be procured somehow. Occasionally, students themselves might work to get a body, but in places where body trafficking was heavy, professional “resurrectionists” held sway.[ix] The means of securing specimens may seem barbaric to us now, but could be very workman-like; a good resurrectionist would have an extensive network that included undertakers, graveyard workers, and even other doctors who might be called to the deathbed of a patient and so provide first notification. The coffin would be uncovered and the top broken to allow access to the body, which would be drawn forth by a rope tied around the neck.[x] The bodies were stripped of incriminating identification and the dirt, flowers, and other grave arrangements would be replaced to disguise interference. 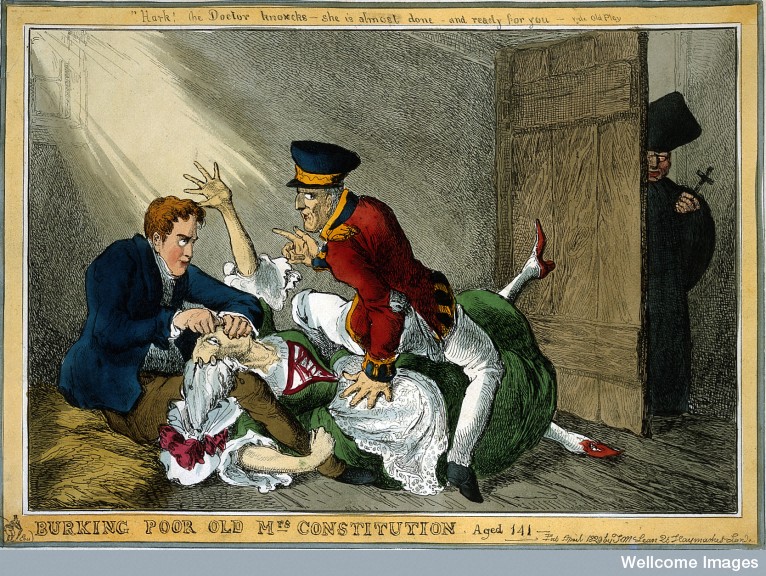 In Britain, the practice was largely the same, though the at-risk population was that of the poor. The graves of paupers were not deep and a single one might have as many as four bodies. Resurrectionists in urban areas worked late at night, using wooden shovels to avoid the tell-tale “clank” of digging.[xi] A “gang” could remove a body and replace the dirt in twenty minutes or less.[xii] Then there were those, like Burke and Hare, who got a head start–they didn’t quite wait for people to die, and were guilty of killing 16 people in Edinburgh and selling their bodies. It’s little wonder the practice was viewed with suspicion.

In much of the United States, laws against grave-robbing were slow in coming (in Nashville, it wasn’t officially outlawed until the twentieth century), and in Britain, the practice was a misdemeanor; only when an object was stolen from the body did it become a felony. Buyers and sellers squabbled over the “specimens,” which were subject to supply and demand, and cadavers traveled about like the other goods produced by the industrial age. The examination of the corpse may have brought about the modernization of medicine, but it did not change the view of the horror-stricken bereaved. What we see instead is a contest of sorts between the medical professional and the public over the sanctity of death, and a real fear that dissection “dehumanized” the doctor as well as the deceased.

Next week, tune in for a look at grave-robbing in our own back yard–Cleveland, Ohio body snatching!

[i] Knott, John. “Popular Attitudes to Death and Dissection in Early Nineteenth Century Britain: The Anatomy