“No single event impressed me more than what happened on April 12, 1955, the day the results of the evaluation of the 1954 poliomyelitis vaccine field trials were announced. As I was making my rounds that afternoon, I was taken aback to find a banner stuck on the doors of the respirator wards that read: ‘POLIO VACCINE WORKS.’ The patients had asked the volunteers, who published an in house newsletter entitled ‘The Toomeyville Gazette,’ to spread the good news.”

Polio. Once one of the most feared of diseases, today it seems part of a past long gone and even forgotten. But there are voices that we can still hear, the lives and times of people who suffered it’s effects, and they should not be forgotten. The iron lung may be the symbol of polio’s power, its deadly means of paralyzing the lungs and suffocating patients. These iconic devices–things termed “half way” technologies by Lewis Thomas–are tools that mitigate disease effects but do not cure. And yet, these technologies were often, as James Maxwell [2] writes, a “necessary step” on the way to eradicating disease, and could be surprising innovations in themselves. Braces and belts, now empty of the limbs they meant to correct, remain full of significance. In today’s post, we examine not the cure, but the treatment–not the vaccine, but the innovative means, developed in desperation, for treating the victims of polio.

History
An infectious disease caused by the poliovirus struck Cleveland (and other major cities around the country) in the early 20th century. Some 7000 died in New York in 1916, and many more were crippled by the disease. In the months that followed the outbreak, how were patients treated and what was done to prevent new epidemics? Unfortunately, the cause of the disease wasn’t well understood for many years. It grew worse in the warm months, and seemed to strike children most–though it could also infect adults. FDR contracted polio in 1921, suffering paralysis. Where did it come from? Why had it become an epidemic? And why did countries and cities with improved hygiene see the worst outbreaks?

One possible answer comes from research done at the time. Dr. Sabin, also the creator of the Sabin Oral vaccine, extensively researched developing nations. He found cases of the poliomyelitis virus, but not of paralysis or of its epidemic proportions. Nidia De Jesus sums up Sabin’s findings: Prior to the 20th century, “virtually all children were infected with PV”–but at a very young age, when they were still protected by maternal antibodies. In the 1900s, improved sanitation meant that children were much older when they encountered the virus–and no longer protected. [3] In other words, by cleaning up water systems (polio virus is carried in waste matter), hygienic measures protected people far longer. So long, in fact, that Franklin Roosevelt didn’t come in contact with it until swimming as an adult, long after any maternal antibodies might still be at work. There are some problems with the sanitation theory–it doesn’t explain, for instance, why paralytic polio is appearing now in countries where sanitation systems are less developed… Or why anomalous cases appeared even in Sabin’s time. [4] One thing was certain, however; new methods needed to be employed ahead of the vaccine, to deal with the disabled and afflicted.

Three strains of polio were ultimately discovered (by David Bodian MD, PhD, in 1949), but the symptoms that alarmed physicians tended to cluster as follows: Fever, stiff neck and sore throat, stomach ache and vomiting, diarrhea, pain in the legs, and–crucially–weakness of the muscles. Paralysis often began in the extremities and moved to the lungs–and the iron lung provided relief by using a pressurized chamber to help the sufferer breath. This technology aided patients during their critical illness, but for some, the lung would be a companion for life. Other treatments focused on those who survived the disease but with permanent paralysis, weak limbs, deformity, and more. History tends to remember Dr. Jonas Salk and Dr. Albert Sabin, those who perfected the polio vaccines–but how aided those who had already contracted the disease?

Dr. John Toomey,  physician and professor at Western Reserve University Medical School, was the first to recommend physical therapy for polio sufferers, including 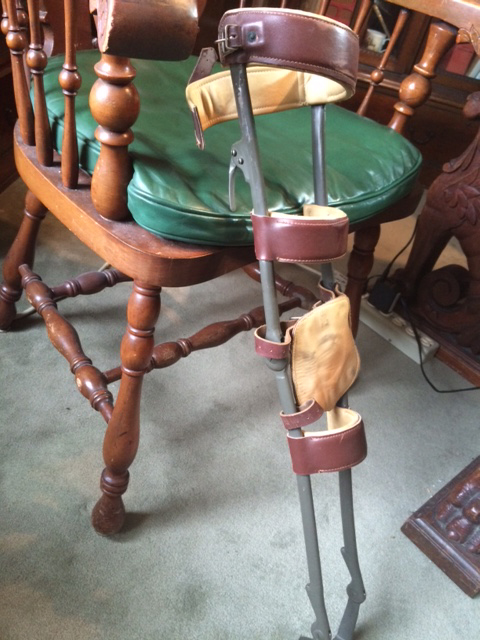 massage. Some early treatments included casts that prohibited movement, but Toomey disliked using plaster casts, arguing that in polio treatment early detection and vigorous massage were vital. He was also among the first to realize polio entered the body through the gastrointestinal tract. [5] A young man named Robert Eiben would replace Toomey upon his death in 1950, revolutionizing treatment at the Toomey Pavilion where many of the afflicted were housed and treated. The 1959 edition of the facility’s newsletter explained that “Dr. Eiben does not treat only the disease, he treats the patient.”[6] Use of physical therapy, of stretching, bracing, practiced movement, ultimately aided in rehabilitating many patients–including Donna, whose leg brace was donated to the Dittrick Museum. “I live a full and active life,” she explains; and even today, physical therapy remains part of post-polio treatment.

Did the iron lung, the leg brace, and physical therapy eradicate the disease? No, it would take the polio vaccine and an active and engaged vaccination program to do that. However, great things have come from such innovations. The iron lung paved the way for later respirator technology; the leg brace and therapy not only revolutionized care of individuals by strengthening muscles, it also engaged  nurses in responsive care, giving them essential roles [7]. And finally, with the work of Drs. John Enders, Thomas Weller, and Frederick C Robbins (who joined the Cleveland City hospital staff in 1952 as Director of Pediatrics and Contagious Diseases), we took a step towards the cure.