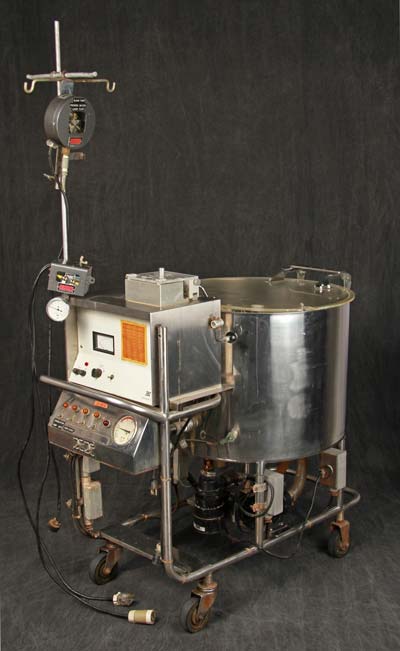 The artificial kidney made life-saving dialysis possible for people with end-stage renal disease. Originally developed by Willem Kolff in the Netherlands in the late 1930s, the dialysis machine filtered blood impurities using a permeable cellophane membrane. By the late 1940s his design was technically viable but not yet produced commercially.

In 1950 Kolff came to work at the Cleveland Clinic Foundation in the United States. He was brought to the clinic by Dr. Irvine Page whom Kolff had met while making his second lecture tour in the United States. Page, director of the Cleveland Clinic’s research division, recognized the importance of Kolff’s work on the artificial kidney and knew that he would be an asset. While at the Cleveland Clinic, Kolff and Dr. Bruno Watschinger, a visiting Austrian researcher, developed the disposable twin coil kidney. He collaborated with Travenol Laboratories (later known as Baxter Travenol Co.), a producer of intravenous and saline solutions, to market the artificial kidney in 1956. Kolff tried to keep costs down by using a Maytag washing machine as the tank of the artificial kidney, but the manufacturer, fearing litigation, later forbade this use of their product. Dialysis was initially intended for acute cases (drug intoxication, third degree burns, and mismatched transfusions) that held the promise of restored renal function, rather than for patients suffering from chronic and irreversible end stage renal disease. Over time, however, it became more widely used for chronic cases, even including terminally ill patients who could not reasonably hope to be “saved” by this “wonder machine.”

By the early 1960s long term dialysis by machine won acceptance, thanks to improved cannulas and shunts, more effective use of anticoagulants, and the rise of for- profit dialysis centers. At the same time, kidney transplant became a reality, made practical thanks to immunosuppressants and antibiotics. Despite these advances, the therapies were expensive and often in short supply. This troubling situation only came to an end in 1972, when federal legislation (Public Law 92-603) mandated Medicare coverage of the costs of end stage renal disease treatment for those who could not afford it. Many soon feared that the expense of this program would spin out of control, bankrupting Medicare. This did not happen, but the impact was not insignificant: in the first decade the end stage renal disease accounted for 3% of Medicare expenditures. This, in turn, stimulated the search for cost containment measures that could be applied to all medical technologies, not just dialysis.

The machine seen here, a Travenol RSP (single pass recirculating hemodialysis machine), filters waste products from the bloodstream by passing a patient’s blood through cellophane tubing wrapped in a coil, between woven sheets of fiberglass. The entire coil is submersed in a dialyzing solution. The smaller waste particles in the blood diffuse to the dialyzing solution while the larger blood cells and proteins remain in the cellophane tubing to be pumped back into the patient.

The instruction manual for this artificial kidney reveals that the seemingly simple concept of diffusion is not so easily carried out. Operation of the Travenol RSP required a large amount of preparation followed by continuous monitoring and attention for it to safely cleanse a patient’s blood. The complexity of the technology led to the rise of dialysis centers, complete with trained staff. Some home dialysis was practiced, as seen in the photogragh below, but it became the exception, not the rule.