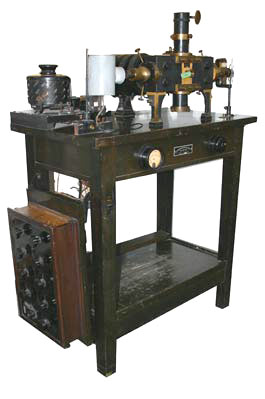 Between 1880 and 1930, technological advances enabled the physician to make quantitative measurements for more accurate diagnoses, and in part to assume the role of scientist. The electrocardiograph machine, for precise identification of the electrical events of the heart, comprised one of the most important of such technologies.

In the late 19 th century, the capillary electrometer was the first instrument that recorded the heart’s electrical signals from outside the body. Over some 15 years Willem Einthoven, a Dutch physician, struggled with this instrument and achieved a more accurate recording. He named the tracing and electrocardiograph, and labeled the deflections P,Q,R,S, and T – still in use today. In 1901 Einthoven introduced a string galvanometer to record accurate ECGs directly. The galvanometer featured a thin filament suspended between the poles of an electromagnet; the filament moved in the magnetic field as electrical signals from the heart passed through it and this movement was recorded on a photographic plate. For the development of the ECG, Einthoven received the Nobel Prize in 1924.

The initial versions of the machine were huge, cumbersome, and difficult to use. Over the years, improvements rendered the machine smaller, even portable, and culminating in a direct writing machine in 1950. Einthoven’s system of three leads to measure signals from the frontal plane of the body was replaced by electrodes on the chest. (the so-called precordial leads) The key figure in these developments was Frank Wilson of the University of Michigan.

Today, the ECG can detects abnormal rhythms, and can diagnose non-arrhythmic cardiac abnormalities, enlargement of the chambers, as well as ischemic heart disease, angina or infarction – the clinical “heart attack”. The ECG seen here is a Williams-Hindle Model 2. Dr. H.B. Williams developed the American string galvanometer based on Einthoven’s original design, and Charles Hindle manufactured it for the Cambridge Instrument Company of Ossining, New, York. This machine was purchased for the medical research laboratory at Lakeside Hospital in 1920. It was installed with modifications under the direction of Dr. Horace Korns. Dr. Korns had the ECG wired to the medical wards which allowed telecardiograms to be taken. The complete apparatus, including the 13th string galvanometer produced by the Ossining factory, was donated to the museum in 1958.

The ECG was not accepted with the same readiness as the X-Ray machine. Although it was available by 1902, it did not begin to have a significant impact on hospitals until the end of the 1920s. The ECG accelerated the hospital’s transformation into a scientific and diagnostic center. Like radiolographers with the X-Ray machine, electro cardiographers found their way onto hospital payrolls. The Pennsylvania Hospital paid their electro cardiographer 75% of the revenues from ECGs conducted. Physicians also transformed their practice based on the introduction of new technology. The ECG opened the door for new cardiac research funding. Records show that many ECGs were performed on patients “for study” rather than for diagnoses. Hospital administrators developed new methods of recording and organizing patient information based on graphic representations like ECG charts. This new hospital-based technology accelerated the progress of specialization among American physicians, which increasingly became a central feature of their professional abilities.