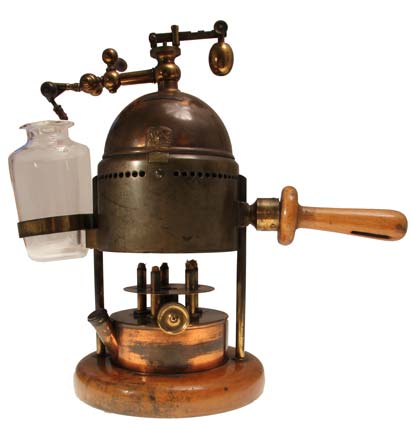 We could not enter the amphitheater until carbolic acid atomizers had been playing long enough to fill the room with a haze of steam. The patient was brought in and the field of operation was scrubbed with soap and water and a stiff brush, and then washed with bichloride of mercury, and then surrounded with towels wrung out of the same solution. Before beginning the operation, Dr. Weber would carefully spray his luxuriant beard with 5% carbolic acid and, as soon as the operation began, two atomizers spraying from opposite sides kept the wound continually bathed in carbolic acid mist. The making of the carbolic solutions was usually left to the hospital interns, and frequently the acid was so poorly mixed that large globules floated in the solutions in which we bathed our hands or immersed our instruments. The result was minor burns of the fingers and distinct numbing of the sense of touch. At this time iodoform was first becoming popular because of its anesthetic effect upon open wounds, and its supposed antiseptic properties. I think it was due chiefly to the free use of iodoform and carbolic acid, whose disagreeable odor clung to ones clothes and hair and became particularly noticeable when in a warm room, that I contracted a habit of not going to church.

Into this climate of experiment and controversy came Dudley Peter Allen (1852-1915), a young surgeon just concluding a medical “grand tour” of Europe and Britain. Allen was eager to apply his new-found knowledge, but the Cleveland surgical scene offered little promise. From Allen’s own account, antiseptic principles had either been ignored, or tried and abandoned, in Cleveland’s hospitals. To remedy this situation, Allen became the city’s leading promoter of both antisepsis and asepsis. Indeed, he brought to Cleveland some of the most modern, up-to-date equipment for performing scientific surgery. This included a larger carbolic acid sprayer purchased in London and a Hartnack microscope bought in Berlin.