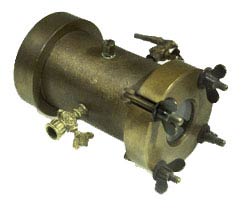 John James Rickard Macleod (1876-1935), professor of physiology at Western Reserve University from 1903 to1918, used this compression chamber in the study of caisson sickness. Caisson sickness afflicted workmen laboring in the high atmospheric pressure of a submerged caisson when building an underwater tunnel or sinking a bridge pylon. If they emerged too quickly, without a gradual decompression, they suffered the “bends,” caused by an effervescence of nitrogen in the blood and tissues. Divers also experienced these problems when resurfacing too rapidly from great depths.

An interest in caisson sickness can be traced to Macleod’s work with the physiologist Sir Leonard Hill at the London Hospital Medical College, 1900-03. They collected data on known cases of caisson sickness, complete with vivid clinical descriptions of the agonies suffered by workmen. In the laboratory, Hill and Macleod subjected mice to different pressure levels (as high as 12 atmospheres) to ascertain the physiological effects. 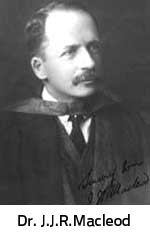 Macleod continued the study of caisson sickness when he moved to Western Reserve University in 1903. In this context he had a compression chamber fashioned for laboratory experiments. It consisted of a heavy bronze tube featuring thick glass windows on each end: Air pressure was controlled by means of household gas valves that had been brazed on the tube.

Macleod subsequently focused his research upon carbohydrate metabolism, particularly diabetes miletes. His research and publications on this and other areas of physiology helped establish the reputation of Western Reserve. In 1918, MacLeod left to become professor of physiology at the University of Toronto, where he continued his work on diabetes. His collaboration with Frederick G. Banting led within a few years to the discovery of insulin. As a result, the two men were awarded the Nobel Prize in Medicine in 1924. MacLeod returned to Scotland in 1928 to become Regius Professor of Physiology at the University of Aberdeen.