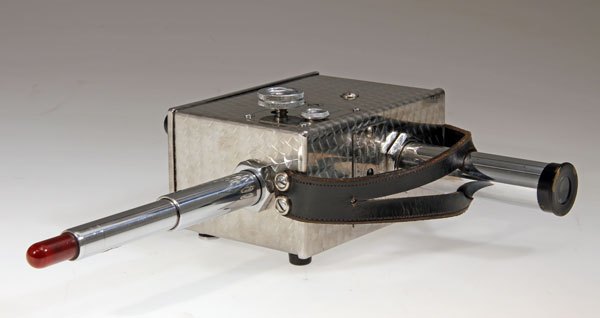 X-ray diagnosis and radiation therapy constituted dramatic advances for medicine, but each posed a potential health hazard. Patients and pioneering radiologists risked burns and even deadly cancers from radiation overexposure. Initially, radiotherapists estimated the dosage on the basis of reaction of the skin, the amount of radiation required to redden the skin being considered to be an “erythema dose.” The advent of dosimetry, to measure levels of radiation dosage, therefore constituted a great advance for medicine.

A notable pioneer in dosimetry was Otto Glasser (1895-1964), a German-educated physicist whose career encompassed radiology, radium therapy, and nuclear medicine. Glasser emigrated to the U.S. in 1922, working at Johns Hopkins, Columbia, and finally the Cleveland Clinic, where he became head of the Dept. of Biophysics in 1926. Following World War II, he became interested in the medical applications of radioactive isotopes, being one of the first scientists to measure radioactive fallout and helping standardize the measurement of radioactivity. Glasser was also the world’s authority on Wilhelm Conrad Roentgen, the discoverer of x-rays, publishing a life of Roentgen in 1931 in German and in English in 1933 and 1934.

Glasser, in collaboration with Hugo Fricke, devised an electrometer dosimeter to measure radiation dosage in 1925. (They were aided in this endeavor by other Clinic staff, including the engineer Valentine B. Seitz and Dr. U. V. Portmann, who conducted clinical trials.) To manufacture the instrument, Glasser turned to Jack Victoreen (1902-1986), a Cleveland radio parts manufacturer. The Victoreen Instrument Co., founded in 1928, marketed the first commercial model, known as the ‘Condenser R-Meter,’ and it proved an immediate success. This instrument, consisting of an ionizing chamber connected to an electrometer, accurately measured the intensity and total dosage of x-ray delivery and of radiation. It soon became the industry standard and Victoreen emerged as a leader in radiation measurement. The company provided 95% of the instrumentation for the Bikini atomic bomb tests after World War II, earning itself claim to the title of “first nuclear company”.