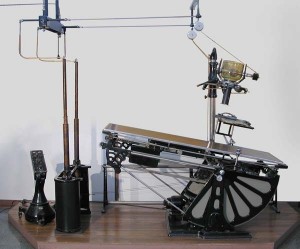 Cleveland became home to new medical technology industries after 1900. X-ray equipment manufactures flourished, as exemplified by the pioneering Engeln Electric Company. At the turn of the 20th century Henry Engeln, a businessman, collaborated with Dr. George Iddings to manufacture static machines, induction coils, fluoroscopes, and x-ray tubes. Engeln soon opened a factory at 30th and Superior Avenue, where a full line of x-ray and electrotherapeutic equipment was produced in the 1920s.

The tilting x-ray table in the Dittrick Museum represented the top of the Engeln product line in the late 1920s. It features a rail-mounted Coolidge x-ray tube (1913) and Bucky-Potter diaphragm (1921) in the table bed, which helped to reduce exposure time and to attain x-ray images of greater size and clarity. The tilting table incorporates a sliding carriage underneath the table with a second Coolidge tube, thus enabling the projection of the “live” x-ray image onto the flouroscopic screen.

The x-ray equipment industry suffered a major downturn with the onset of the Depression. Engeln Electric Company survived for a while, only to be bought out by industry power Westinghouse. They, in turn, sold the Cleveland plant to Picker X-Ray Corporation. Picker resumed production of equipment at the Engeln site and remains a feature of the local economy a century later. Its corporate descendant, Picker International (since December 1999, part of Marconi Medical Systems), maintains its headquarters in suburban Cleveland.